For centuries the fabled mines of King Solomon have been the object of searching explorers and imaginative novelists. H. Rider Haggard's book, King Solomon's Mines, was perhaps the most fanciful of the genre - and a rattling good read into the bargain!

Now it appears that the legendary mines may at last have been discovered.

In a discovery straight out of an Indiana Jones movie, archaeologists believe they have uncovered one of the lost mines of King Solomon.

The vast copper mine lies in an arid valley in modern-day Jordan and was created in the 10th century BC - around the time Solomon is believed to have ruled over the ancient Hebrews.

The mines are enormous and would have generated a huge income for the king, who is famed for bringing extraordinary wealth and stability to the newly-united kingdom
of Israel and Judah.

The announcement will today reopen the debate about how much of the Old Testament is myth and how much is history. 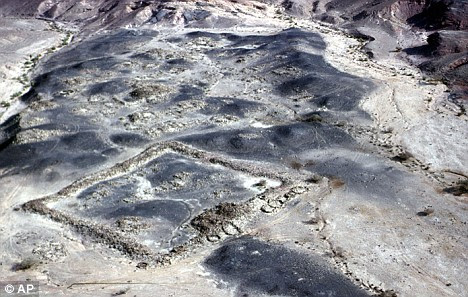 Archaeologists and treasure-hunters have searched for the mines for more than a century since the best-selling Victorian novel, King Solomon's Mines by H Rider Haggard, claimed they could hold a treasure of gold and diamonds.

But now, it seems the real version could have been closer to home, supplying the king with copper.

The ancient mine was found in a desolate region south of the Dead Sea in southern Jordan in an area called Khirbat en-Nahas, which means 'ruins of copper' in Arabic.

The region was known in the Old Testament as the Kingdom of Edom. By Solomon's time, it had become a vassal state, paying tribute to Jerusalem.

Digs at the site in the 1970s and 1980s suggested metalworking began there in the 7th century, long after the time of Solomon.

But Dr Thomas Levy, of the University of California, San Diego, and Mohammed Najjar, of Jordan's Friends of Archaeology, have dated it to the 10th century BC.

Dr Levy said: 'We have evidence that complex societies were indeed active in the 10th and 9th centuries BC and that brings us back to the debate about the historicity of the Bible narratives related to this period.

'We can't believe everything ancient writings tell us. But this research represents a confluence between the archaeological and scientific data and the Bible.'

The ancient site contains around 100 buildings, including a fortress, in the middle of 24 acres of land covered in black slag. The mine works are covered with trials and holes, and are big enough to be seen on Google Earth's satellite images.

The team also found ancient Egyptian artifacts at the site including a scarab and amulet from the 10th century BC.

When Solomon died, his kingdom was thrown into chaos and the Pharaoh Sheshonq is believed to have attempted to crush economic activity.

The findings are reported in today's issue of Proceedings of the National Academy of Sciences.

Having grown up on Rider Haggard's vision of the mines, the reality is perhaps a little disappointing!

No evil witches or witch-doctors, no semi-naked savage heroines swooning over the explorers, no diamonds . . . but some real history, nevertheless.

Very interesting, thanks for posting! I also grew up reading Haggard, and the host of similar "boys stories" designed to reinforce belief in culture and country.

Thanks for the post. I had forgotten about King Solomons mines.

I like to know the chronology of who found what when about the site. Folks have been dreaming about and probably looking for the site even before H.R.H. wrote his wonderful book. Who can say what else may be found in the area?
The discovery of a copper mine doesn't spoil any of my dreams. It will maybe add a few new elements. . .

This is a great find. I'd comment further, but She Who Must Be Obeyed is calling for more coffee...