Amazing pictures of a bird strike in Germany


The Daily Mail has published several photographs of a German Boeing 737 airliner hitting a flock of starlings on takeoff from Dusseldorf. It's believed that over 200 of the birds were ingested by an engine, which was reported to sound like 'sticking a bit of metal pipe into a blender'.

I've cropped and enlarged a close-up view of the engine in question, with part of the fuselage and landing gear around it, to show the flock at the moment of impact. 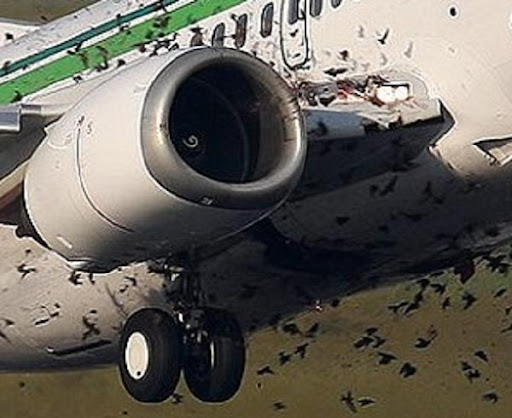 The pilot was able to return to the airport and make a safe landing. Congratulations to him on what must have been a hairy experience (or feathery, at any rate!), and on keeping control of his aircraft in what could have deteriorated into a disaster.

More details and pictures at the link.

The development of commercial turbine aircraft engines in the last forty or so years has featured ever-increasing bypass ratios, and with fans getting bigger and bigger, they tend to make pretty good FOD separators. If we were still flying around commercially on turbojet engines birdstrikes like this would have a much higher chance of chunks getting into the turbine rotors and encouraging those to come apart in dramatic fashion.

Never mind all the engineering and material improvements!