The SS Laurentic was built in 1908 for the White Star Line, later owners of the infamous RMS Titanic. 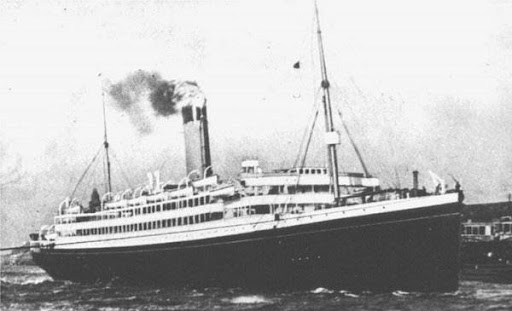 Laurentic and her sister ship, SS Megantic, served the trade between England and Canada. They used different engineering plants as an experiment to determine which would be more suitable for the larger Olympic-class liners that were to follow them: Olympic, Titanic and Britannic. According to the Great Ships Web site:

Laurentic and her sister Megantic were used by their owner and their builder as an experiment. Although otherwise identical, they were outfitted with different propulsion systems. Megantic had a conventional arrangement of twin screws powered by quadruple expansion engines, while Laurentic was given a novel triple screw system, with triple expansion engines powering the wing propellers and exhausting into a low pressure turbine linked to the center propeller. Laurentic's arrangement proved to be both faster and more economical. As a result, that system was chosen for use in White Star's Olympic-class liners.

Both ships were to gain a great deal of publicity when the murderous Dr. Crippen fled from England to Canada with his mistress aboard another ship, the SS Montrose. Alerted by a signal from Montrose's Captain, Chief Inspector Walter Dew of Scotland Yard took passage across the Atlantic aboard Laurentic, which was a faster ship than Montrose, and arrived in Montreal before her. Boarding Montrose in the St. Lawrence River along with the pilots, Dew arrested Dr. Crippen and his mistress, and took them back to England aboard Megantic. 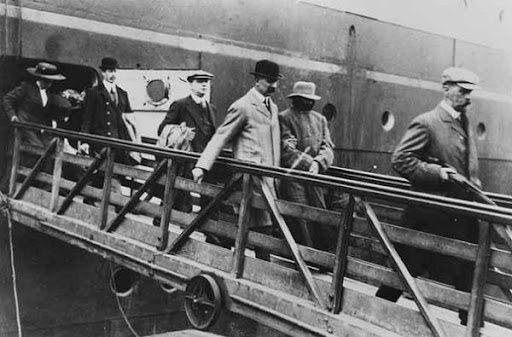 Dr. Crippen was found guilty of murdering his wife, and hanged in late 1910. His mistress, Ethel le Neve, was acquitted. Dr. Crippen has gone down in history as the first criminal to be captured by means of wireless communication.

Upon the outbreak of World War I, Laurentic and Megantic were immediately mobilized as troopships, transporting Canadian forces to England. In 1915, Laurentic was converted to an armed merchant cruiser. She was used to transport German prisoners and civilians from that nation's West African colonies after they were taken over by British forces, and later sent to the Indian Ocean and Far East, where she served as an auxiliary cruiser. 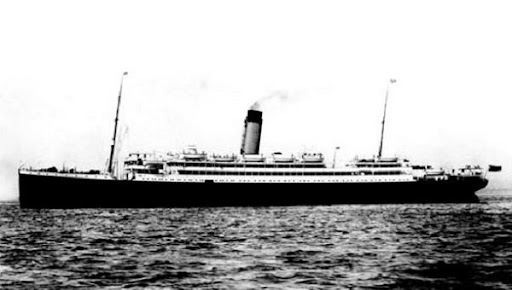 SS Laurentic in 1915, prior to her Armed Merchant Cruiser conversion

In late 1916, Laurentic returned to England. In January 1917 she loaded 3,211 bars of gold, worth about £5 million at the time (today worth at least £250 million, or about US $400 million), into her second-class baggage room. It was to be taken to Canada en route to the USA, where it would pay for munitions.

Laurentic sailed from the Royal Navy base at Lough Swilly in Ireland on January 25th. Almost immediately she struck a mine, part of a field laid by the German submarine U-80 off Fanad Head. She sank within an hour, taking with her almost three-quarters of her crew. Only 121 survived out of 475 souls on board, most perishing due to the bitter cold of wind and water during the winter season.

Needless to say, with so valuable a cargo aboard, salvage efforts were instituted immediately. The Deep Image Web site notes:

During the same month of her loss Lieutenant-Commander G. C. C. Damant was summoned to an urgent meeting with the Admiralty and was given the task of recovering the lost gold. [He was] selected as a man with a reputation as an experienced and efficient naval diver, and somebody whom had carried out a string of successful and dangerous operations.

By September 1917 Damant and his team of divers, working in twenty-three fathoms [138 feet of water] had recovered £800,000 worth of gold from the wreck. Little did Damant realise when he met at the admiralty offices that he was about to begin a seven year salvage epic to recover the gold. Still to this day the quantity of gold that was recovered from the wreck stands as the greatest amount ever recovered from a sunken shipwreck. Damant's salvage is well documented, and the story of the recovery appears in almost every treasure book ever published.

Another reviewer has noted:

Perhaps the most famed recovery in terms of money salvaged vs. cost to salvage was the HMS Laurentic. A converted White Star liner, the Laurentic struck a mine near the Irish Sea in 1917 while carrying 43 tons of gold worth five million pounds when a pound was a pound. In salvage operations that consumed parts of six years, all but 25 of 3211 gold ingots were eventually recovered for 99.2 percent recovery at a cost of only 2.5 percent of total value recovered.

The wreck was largely dismantled during the salvage operation, as can be seen in the two photographs below. 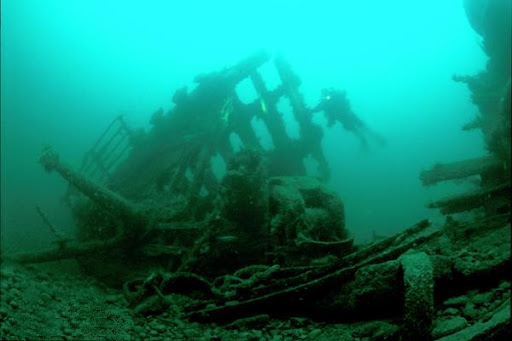 Some of the gold bars were recovered more than 30 feet below the surface of the seabed, where they'd sunk into the soft mud of the bottom. It's presumed the missing bars are still buried there, perhaps even deeper.

Ownership of the wreck of the Laurentic was later purchased by Mr. Ray Cossum of Ireland. Shares in the wreck have been offered to the public. It's hoped that some or all of the outstanding 25 bars of gold may yet be found. Today, they'd be worth approximately £10 million (about US $16 million). Those hopes may be slim, but greed springs eternal . . .

Which brings us to the point of this post. One of Laurentic's 6" cannon, weighing 10 tons, was raised from the wreck in 2007. After a long restoration, it's now been mounted on the quay in Downings Bay, as a memorial to the wreck and those who died aboard her. 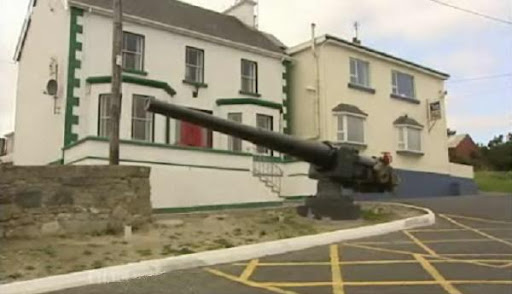 Diving enthusiasts are regular visitors to the wreck of the Laurentic, which lies at a depth of 130-140 feet, easily within reach of scuba apparatus. Here's a video of a recent dive on the wreck.

May those who died aboard Laurentic rest in peace: and may her cannon, now mounted as a memorial, remind us of the perils always faced by those who 'go down to the sea in ships'.