We're about to fall off the economic cliff


I think this may be one of the most important posts I've ever put up on this blog. I implore you, dear readers, to watch the video and read this article carefully. It's all true - and it accurately portrays the economic future we all face right now. I say that as a former director of companies, as one who holds a Masters degree in management, and one who - while not a professional economist - knows enough about economics to make a well informed judgment.

The 'Ticker Guy', Karl Denninger, has just released a video, accompanied by an article on his Web site. Here's the video to begin with. Please, take the time to watch it.

Mr. Denninger goes on to outline his arguments further in an article. Here's a brief extract, accompanied by the three graphs you've already seen in the video (reproduced from The Market Ticker with permission), for your reference.

The fact of the matter is that you have been lied to for the last decade about our economic state, and if we do not divert from the road we are on our economy, our monetary system and our government WILL COLLAPSE.

It is a mathematical certainty, and here is the proof.

First, I present the graph of our economy - GDP and Debt, from the 1950s onward. 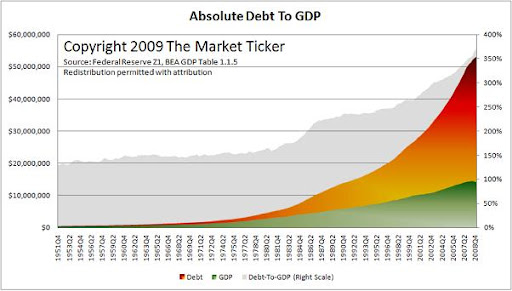 Now I want to present two charts - the first being a simple mathematical chart of two functions - a GDP that grows at 5% annually and debt that grows at the actual compound rate it has grown since 1953, 8.7946%.

I started both debt and GDP at the same value, $10,000, for the purpose of this series (even though in fact debt was higher than GDP.)

You'll notice that due to the fact the debt isn't a constant (and neither is GDP) these are not exact matches - but they're pretty close! 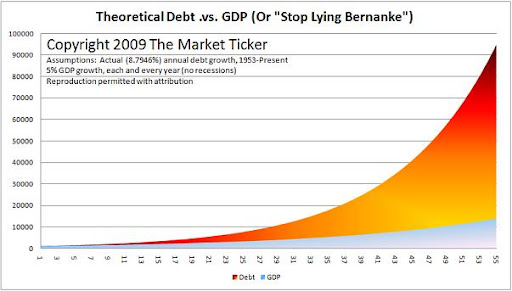 Now let's go forward 20 years, maintaining the same assumptions. That is, if you and your wife or husband, boyfriend/girlfriend sleep together tonight and conceive a child, this is what our economy will look like in terms of debt and GDP at the approximate time they go to college: 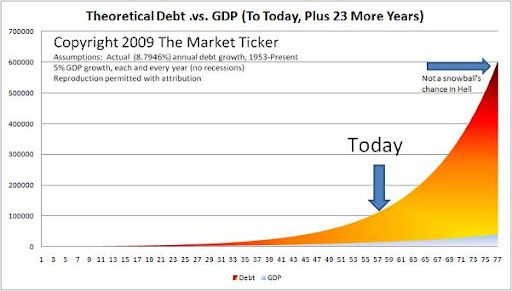 Debt outstanding will be six times greater in 20 years. GDP will be three times greater, but having started from a much lower level, will of course continue to lag.

Do you really believe that those interest payments can be made?

Look at that chart.

Now look up above at the top chart.

Tell me it doesn't turn into the bottom chart.

I didn't make these numbers up folks. That compound annual debt growth rate is real.

The correct action to take in 2000 was to force the bad credit from the system and accept the impact on GDP. It would have caused about a 10% contraction in GDP at that time - a mild Depression (or a really nasty recession, depending on how you count it.)

Now, having instead blown another credit bubble, we essentially doubled the debt in the system over the last ten years, while GDP grew by about 40%.

The result of this was a horrible stock market crash, 6.7 million jobs lost (and underreported), personal income tax receipts are down 21%, corporate tax receipts are down 58%, the deficit is tracking at $1.8 trillion this year alone (and $9 trillion more predicted over the next decade), government is now spending nearly 200% of taxes taken in, 13% of mortgages are either delinquent or in foreclosure, more than 20% of all FHA loans are delinquent or in foreclosure, home prices have fallen by half in many places and are not done declining and the rest of the world is wondering if we're going to try to hyperinflate and destroy our currency.

If we try to double our debt once again over the next ten years we won't make it there. The available free cash flow cannot support the interest payments now, and won't be able to if we add more debt to the system.

I understand the political difficulty of closing all the major banks in the United States, selling off their assets and making good on their deposits when required. I recognize the damage this will do to pension funds and bond investors. I am fully cognizant of the fact that this means taking an intentional depression here and now.

But if we don't it will in fact be worse later.

The odds are high that if we attempt to add more debt to the system, instead of clearing debt through defaults and bankruptcies, that we will precipitate not only a Depression but a full-on monetary collapse.

Such an outcome would destroy our economy, result in almost everyone who is currently middle class and has any debt whatsoever being rendered penniless, unemployment could easily reach 30% or more and the government would be unable to fund any of its social programs, including Social Security and Medicare.

Now think that through - 100 million homeless, penniless, angry Americans searching for the people responsible for what amounts to a "sudden stop" in the economy along with the cessation of all social assistance payments. What sort of odds would you like on civil disorder (at best) or a revolution (at worst)?

We are one cycle away from a collapse - if we're lucky.

We must change our economic course now and accept the contraction that MUST COME in order to save our economic and monetary system.

Folks, I don't know how to put it more clearly or concisely than Mr. Denninger.

I urge you to forward the link to this article to your friends, family, and anyone else you value. (To get a stand-alone link, Windows users should right-click on the headline to this article, then select 'Copy Link Location' from the menu. From there, you can paste it into an e-mail.) Let them watch the video, read the excerpt, and go to the Market Ticker link for the whole thing if they want to. They need to be aware of the reality we're facing.

I further urge you to communicate with your Congressional representatives and Senators, demanding to know what they're going to do about this reality. If their only answer is to pump more credit into an already-bankrupt system - ditch them at the next election. I don't know or care who their opponents may be, or from what party - just vote for them, and get rid of the incompetent scoundrels who got us into this mess, and who are perpetuating it at present through refusing to recognize mathematical reality when it's thrust under their noses.

Finally, my friends, look to your own financial house. I wrote about that in two articles earlier this week. It's now a matter, not just of priorities, but of survival.

I endorse Mr. Denninger's conclusions 100%. If you don't . . . I'm glad for your faith in the system, but I don't share it. The next year or two will show us who's right.

I have heard from several sources, that our next currency will be cartridges. I say that without a bit of humor. James Wesly Rawles has a book out about a calamitous collapse of our economy. I don't buy a lot of what he had to say. I can't see such a collapse occurring that quickly.

When Obama raised the debt ceiling to $13Trillion dollars, I fear that nailed the last nail in the coffin. I'll work my best to stay and/or eliminate the consequences of that act. I hope it will be enough.

As Rush has said, "Elections have consequences."

When the house of cards comes down, it will be with shocking speed. Just my opinion.

These times are getting just a little too interesting, methinks.

I am soooo hoping Karl is wrong...