Those who take an interest in ships and the sea will know that, ever since maritime trade routes became the backbone of world commerce and industry, trade between the Far East and Europe has had to go one of four ways: initially around Cape Horn in South America or the Cape of Good Hope in Africa, or, in later years, through the Suez or Panama Canals.

Now, thanks to global warming, it looks as if the Northeast Passage (also known as the Northern Sea Route) around the top of Russia will be open to traffic during the summer months. The BBC reports:

Two German merchant ships are sailing from Asia to Europe via Russia's Arctic coast, having negotiated the once impassable North East Passage.

This route is usually frozen but rising temperatures in the region caused by global warming have melted much of the ice allowing large ships to go through. 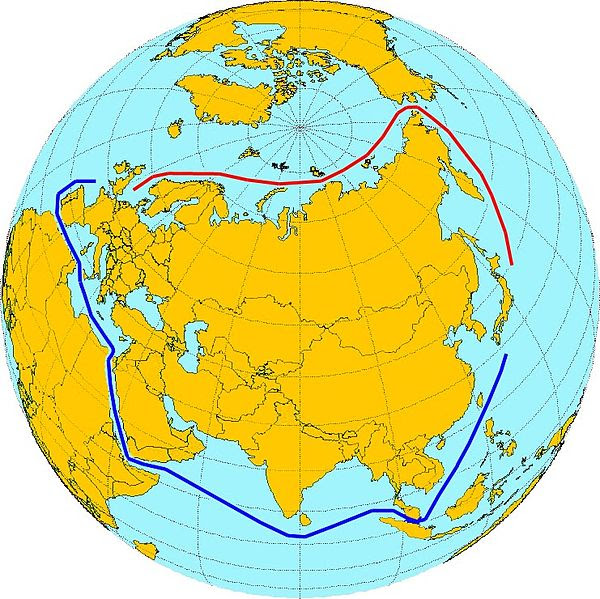 The German ships Beluga Fraternity and Beluga Foresight arrived in the Siberian port of Yamburg, in the Ob river delta, on Monday, owner Beluga Shipping GmbH said on its website. 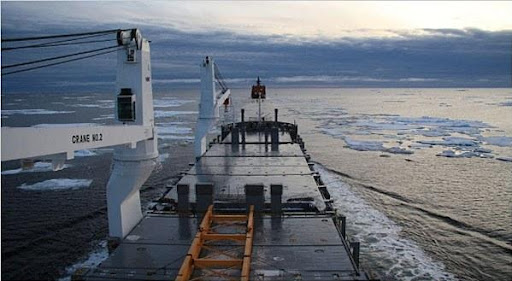 "We are all very proud and delighted to be the first Western shipping company which has successfully transited the legendary North East Passage and delivered the sensitive cargo safely through this extraordinarily demanding sea area", said Beluga CEO Niels Stolberg.

The passage became passable without ice breakers in 2005.

The company behind the enterprise says it is saving about $300,000 per vessel by using the northern route.

Scientists estimate that the last time that the North East Passage was as ice free as it is now was between 5,000 and 7,000 years ago.

This will be a very important development, if it can be used on a regular basis each year. The journey between the Far East and Europe will be shortened by anywhere from 20%-35%, with a corresponding saving in shipping costs. It'll also mean a whole new way for Russia to develop the mineral wealth of its northern seas and coastline, which until now have had to rely on (largely non-existent) land-based transport routes. Look for the Chinese to become actively involved in financing the exploitation of these resources, so close to their home market.

Also, if the Northeast Passage opens up, the same is likely to happen to the Northwest Passage, around the top of Canada, linking the Atlantic and Pacific Oceans.

This will make trade between the Far East and the East Coast of Canada and America much quicker, easier and cheaper. Mineral resources in Canada's Far North are also more likely to be exploited, with sea transport readily available.

Who says global warming is necessarily a bad thing?

'The first' commercial passage of the Northwest Passage? Uh, no: with a little Googling I'm sure I could turn it up, but a fully-laden oil tanker did it back in the '80s or so.

Actually, the amount of arctic ice is growing, not shrinking. This tinyURL

will take you to cryosphere today. It shows the northeast passage is actually passable in the middle of September in most years. Play with the dates and see what I mean.

This link leads to an arctic ice extent graph:

Note that the annual melt stopped VERY early this year, and the refreeze has started.

Here's a link to a northwest passage expedition -

And a search of the keywords will bring up links to several more this last summer.