Is the world really becoming a better place?


According to New Scientist magazine, yes, it is. They've published a very large graphic filled with data that, according to them, illustrate, by various measurements, that the world has been steadily improving. Here's a couple of excerpts: 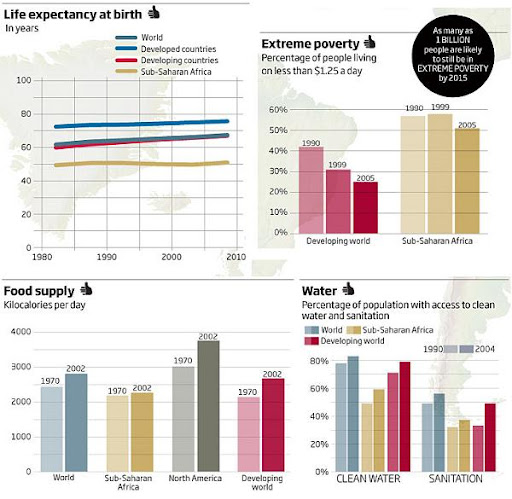 The full graphic may be seen here. You may need to click on it to enlarge it.

Of course, New Scientist leaves out other data that I'd consider important: the degree of State control versus individual freedom, the role of the 'Nanny State' versus the application of common sense, and so on. I think that all such measures show a decline in personal freedom and a growth in the thicket of rules, regulations and impositions surrounding us. Melody Byrne had a wonderful rant on that subject in The Anarchangel a few days ago. An extract:

Why does the government have to meddle in all of my affairs? Why do I have to jump through hoops just to accomplish the most simple things in life?

It's all about power and control. Always has been always will be.

I'm sure in the beginning the encroachment began with simple things. After all, isn't the government supposed to protect our rights? Isn't having a dedicated police force, justice system, military, etc. worth a little in taxes?

Then a little more encroachment. Who can disagree with a little tax to pay for state roads? That's entirely reasonable, right?

Then enforcement of standards. Who can disagree with licensing teachers? Making sure underage kids can't marry?

Then the panics set in. Contaminated meat? The government should "do something" so it won't happen again! E coli? Pasteurize EVERYTHING!

Of course, the NIMBY'S added their own input. Nuclear power plant? Not in my backyard! Enforce zoning so I won't have to worry about it! Require my neighbor to clean up their yard so my house values don't go down!

Then the lobbyists. Require farm inspections and multiple hoops so small farmers give up and "our big backers don't have competition". Give into the "green" lobby so they don't pull their campaign contributions.

Of course there's always the pure tax whores. "It's just a little reasonable fee. On everything. You want to pay your share, right?"

Of course all of this gets codified into law, and the ultimate persuasive tactic is put into play.

This is exactly how we went from a system in which the government's job of protecting our rights to a system where government determines WHO is ALLOWED to trample on our rights.

New Scientist doesn't take a position on that sort of thing, unfortunately . . .