I've written before about various models of robot under development for the US armed forces. However, this report on CNET is something new to me.

The Defense Advanced Research Projects Agency has demoed its Precision Urban Hopper robot, a wheeled ground unit that can leap over 25-foot-tall obstacles and keep on truckin'. 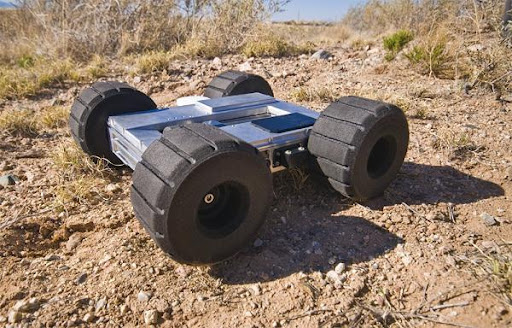 Seen in the video below, released last week by the Sandia National Laboratory, the shoebox-size Hopper easily takes on a chain-link fence, bounces a bit after landing, and then keeps rolling. It seems that a piston-fired leg makes it fly.

The Precision Urban Hopper is being developed by Sandia and Boston Dynamics, creator of the famously creepy BigDog robot, for surveillance operations in urban terrain. Guided by GPS, it is designed to "bolster the capabilities of troops and special forces engaged in urban combat," navigating autonomously, according to Jon Salton, a program manager at Sandia.

Sandia said hopping has "shown to be five times more fuel-efficient than hovering," when it comes to getting around obstacles less than 30 feet tall. It added that other potential applications of the Hopper include law enforcement, homeland security, search and rescue, and exploring other planets.

Here's a video clip of the Hopper doing its thing.

All I can say is, I hope they don't test that thing in this part of the world during duck season! The sight of a jumping metal box with wheels would have thousands reaching eagerly for their shotguns. "Hold supper, darlin' - I'm gonna get me some target practice!"

Apart from the patented Hopping Action (TM), it looks like one of the RC toys I had as a kid.