An invention too far?


I think I've heard everything now. An Irish company has produced a novel environmentally-friendly instrument for the Third World.

The eco-sex toy - dubbed the Earth Angel - uses a small wind-up handle to power up rechargeable batteries inside the casing. 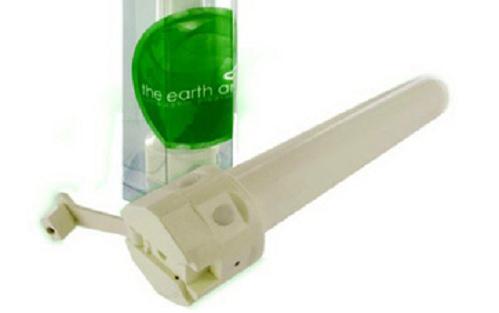 It had originally been planned as a sex aid for the Third World where batteries and electricity supplies are unreliable.

"We wanted to produce an environmentally friendly sex toy that appealed to all consumers regardless of gender, age or ethnicity.

"It has been in its development stage for the past two years and we are excited that our vision has become reality," said a spokesman.

I have news for thee, Camden Enterprises. There are a few snags that you, from your First World perspective, clearly haven't taken into account.

First, the average Third World woman doesn't have much in the way of time, energy or imagination for such devices. She's too busy fetching and carrying (firewood, water, food, whatever), trying to steer clear of the violence that's so often endemic in that environment, keep herself and her family as safe as possible from predators (four- and two-legged), avoid the diseases that flourish all around her, and not collapse from exhaustion!

Second, her husband (or boyfriend), in the typical patriarchal society that's commonplace in the Third World, is likely to beat her black and blue for insulting his manhood if he finds her even in possession of (much less using) such a device. That would imply he's not good enough for her (i.e. not fully satisfying her needs). She'd be insulting him by implication, and she'll pay for that - in blood and broken bones.

Third, the First World women who are snapping them up at your trade shows may get an ecological buzz (as well as a more physical variety) from using them: but they don't really give a damn for the Third World. Neither do you. If either did, you'd be out there using your inventive talents to develop and produce things that the impoverished masses really need. Sex toys are not high on their list of priorities!

I thought I'd seen everything.

You showed me tonight that I'm wrong.

This, rather than the Fench mayors, should have been your Doofus of the Day selection.

Thanks for the giggles.

wv = weddest. item under discussion not needed if you are weddest?

Maybe they could start with something like... fresh water?

Reflectoscope hit it on the head.

How about a portable water filtration system that is 100% field maintainable, and doesn't need fancy new (disposable) cartridges every 20 gallons?

Maybe a solar powered water distillation system? One slightly more sophisticated and fragile as a trash bag over a hole with a drip string and a can.

This is a classic marketing failure. The correct market segment for this is first world women who find that the batteries in the units they are presently using, don't last long enough.

"...you'd be out there using your inventive talents to develop and produce things that the impoverished masses really need."

Peter, they're not really interested in that. I suppose that their real market is as Billll wrote: granola crunchers in Europe and North America.