The Jedi Master's in trouble again . . .


Last year I wrote about the newly-formed chapter of the Jedi Church in Holyhead, North Wales.

It seems that self-styled 'Master Morda Hehol' (more prosaically known as Daniel Jones) has run into a little problem with his religion.

The founder of the Jedi religion inspired by the Star Wars films was thrown out of a Tesco supermarket for wearing his distinctive brown hood.

Daniel Jones, 23, who has 500,000 followers worldwide, was told the hood flouted store rules and was ordered to remove it or leave the supermarket.

As a result Jones, who also goes by the Jedi name Morda Hehol, claims he has been 'victimised over his beliefs' and left 'emotionally humiliated' by the supermarket in Bangor, North Wales.

But Tesco hit back in the spirit of the epic space saga and claimed that the three most well known Jedi Knights in the Star Wars movies - Yoda, Obi-Wan Kenobi and Luke Skywalker - all appeared in public without their hoods. 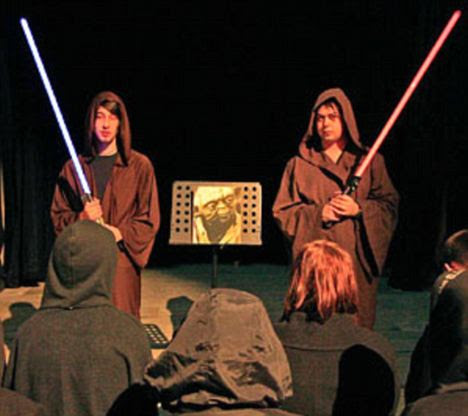 Mr Jones claimed the store manager and staff were 'unco-operative' and left him feeling 'emotionally humiliated' for making fun of his beliefs.

'It was discrimination. They were making a joke against me. I was really upset. Nobody should be treated like that.

'We have 500,000 members in our church. It is a religion founded in Wales with a scripture and ceremonies.'

Mr Jones has made an official complaint to Tesco, is considering a boycott of the store and is seeking legal advice.

A Tesco spokesperson said: 'He hasn't been banned. Jedis are very welcome to shop in our stores although we would ask them to remove their hoods.

'Obi-Wan Kenobi, Yoda and Luke Skywalker all appeared hoodless without ever going over to the Dark Side and we are only aware of the Emperor as one who never removed his hood.

'If Jedi walk around our stores with their hoods on, they'll miss lots of special offers.'

I suspect Master Morda has let his self-appointed status go to his head. The Jedi Church worldwide may have half a million followers, although I doubt it: but he didn't found it, and it wasn't founded in Wales. It's been around for years, and even has its own Web site. There are many affiliated ministries. At best, he's founded an offshoot or chapter of it. Who does he think he is, the Jedi Pope?

As for the hood requirements of his faith (or should that be 'the requirements of his faith in the hood'?), I don't blame Tesco for being a bit uptight about them. Given the prevalence of crime committed by so-called 'chavs' in Britain, and the 'hoodies' they typically wear, of course Tesco staff will be suspicious of some daft Welshman calling himself a Jedi Master and walking around in so outlandish an outfit!

(And isn't it funny how most of the Jedi wannabes are all self-proclaimed 'Masters', without ever having been within light-years of a real light saber? Most of those I've had the misfortune to encounter - over a dozen so far - would give Jar Jar Binks a run for his money in terms of their irritation factor!)

Are Muslims required to remove their head coverings? I would suspect not!

Some people REALLY need to get a life -- I mean, damn, this guy needs therapy.

Sometimes I despair the human race. In an earlier age of time, he would have been eaten by something before he could reproduce, thus sparing the gene pool. Today, no such luck.

Does the Jedi master hold a day job or is he on the dole?