Here's a piece - actually several pieces - of aviation history that appeared at first sight to be contradictory, but aren't in reality.  We begin in the Gulf of Aqaba in Saudi Arabia.  Artificial Owl reports:

It's a beautiful seaplane abandoned between the sea and the desert of Saudi Arabia and it's been left there for almost 50 years. The plane is a PBY-5A Catalina, a military American seaplane from the 1930's. 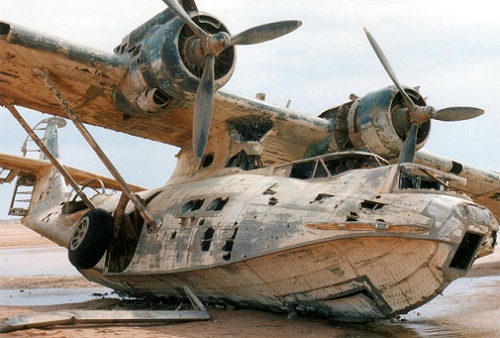 The aircraft ... was bought from the US Navy by Thomas W. Kendall, a retired businessman who converted it to a luxury flying yacht.

In the spring of 1960 Mr Kendall took a pleasure trip around the world with his wife and children together with his secretary and her son. A photographer joined the group to cover part of the trip for life magazine.

On the 22nd March 1960 they landed at the Strait of Tirana and anchored the aircraft a short distance from the shore to spend the night there. They heard someone shouting but did not pay any attention.

In the afternoon of the following day they were attacked with machine guns and automatic firearms from a headland nearby. The children were able to swim back to the aircraft. Mr Kendall and his secretary were wounded while trying to start the Catalina but moved it about 800 metres, unfortunately it ran aground on a coral reef.

On the beach they were captured by a group of Bedouins attached to the Saudi Arabian army, who had taken them to be Israeli commandos. They were eventually taken to Jeddah, interrogated and finally set free with the help of the American Ambassador.

There's more at the link, including many more (and larger) photographs and a link to Google Map co-ordinates.  An illustrated article about the incident was published in the May 30, 1960, issue of LIFE magazine, titled 'Nightmare Windup Of A Family's Dream Trip'.  It may be found here.

However, a commenter at Artificial Owl pointed out that Thomas Kendall's family had donated 'his' Catalina to the San Diego Air & Space Museum.  The Museum's Web site notes:  "After the war, the aircraft was used by the Coast Guard until its purchase by Thomas W. Kendall in 1956. It was donated to the Museum in January 1986 by the Thomas W. Kendall family." 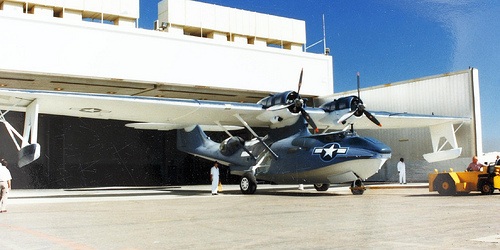 
So, I wondered, which is the real Kendall aircraft?  Did he, perhaps, buy two of them - the second to replace his first, damaged by gunfire?  Is one slowly rotting away on the shores of the Gulf of Aqaba, while the other resides in restored condition in a museum?

My search for more information led me to this article from the Paradise Leased blog.

In the 1950′s, Los Angeles industrialist Thomas W. Kendall and his wife came up with an interesting idea. Purchasing three World War II era PBY Flying Boats, the Kendalls’ hired noted interior designer George Erb A.I.D. of Barker Bros. to convert the surplus war planes into a set of flying and floating luxury suites. The PBY planes were particularly unique as they were designed to be amphibious with both wheels and pontoons.

Erb gave the planes their own unique color scheme and personality creating a ”Gold,” “Turquoise” and a “Red and Black” plane. Each of the giant planes had a capacity to sleep fourteen with foam rubber sofas that converted to beds, a full galley, lavatory and even a dining room with a table that seats eight. Erb masterfully took advantage of the planes’ twin “Blisters,” the glass domed spaces at the rear, which he converted into spacious and gracious lounge areas.

In 1959, the Kendalls, both licensed and experienced pilots, embarked on a year-long round-the world trip with the three planes, bringing along their four children, aged 8-20 as well several other lucky friends including prominent L.A. physician, Dr. Ellwood L. Schultz and his wife. Kendall and his 20 year-old son Bob piloted one plane, Mrs. Kendall another, and Dr. Schultz, also a licensed pilot, the third. The amphibious planes were so complete in their mobility and the luxurious accommodations aboard, the L.A. Times declared “About the only way you could improve on this arrangement would be to take an automobile or two along on the journey. Then all you need to do is drive away from the plane and do some sightseeing.”


Again, there's more at the link, including photographs of the interiors of the three aircraft.

So it seems there were actually three 'Kendall Catalinas' - and according to the article cited above, the family originally intended to buy no less than fourteen!  One's rotting in the Gulf of Aqaba, one's in a museum.  Where's the third?  Does anyone know what happened to it?  Did the family ever buy more than three?  If any reader can provide more information, please tell us in Comments.

Isn't it fascinating what an idle search for information can turn up?  This proved to be a real detective-story-type effort!

So where's the one in Aquaba? Can I have it?

@Murphy's Law: After 50 years rotting in the heat of the Gulf of Aqaba, and bathed in salt water, I suspect it won't be worth salvaging. More recent images show that the wing has now collapsed onto the fuselage.