This post will be of possible interest to fellow bloggers, but not to many others, so if you want to skip this one and go to the next, feel free.

Last July I wrote about problems I was encountering with Sitemeter and its measurement of visitors to this blog.  Recently I received a couple of e-mail follow-ups to that post from other bloggers, complaining that Sitemeter was showing their readership statistics dropping suddenly over the past week or so.  Mine are too, and Google Analytics and Blogger stats confirm that.  I suspect that Google and/or other search engines have 'tweaked' search algorithms again, so that those searching for information on topics we cover are being directed to more 'authoritative' sites.  My 'regular' readership is showing no decline whatsoever - only random arrivals, usually those through search engines.

The thing to watch is one's overall readership over time, and then compare the proportion of regular visitors to unique (i.e. one-off) arrivals.  It's also important to compare readership measurements across different tools, so that one notices when one tool doesn't agree with the others.  To illustrate such trends, here are my blog's readership statistics from three different tools for the period January-December 2012.

First, Google Analytics (above).  This shows a steady readership across the entire year, with a slight but steady drop over time.  (The moderate summer decline, followed by a recovery, then a major Christmas drop, are normal - many readers go on holiday then!  They happen most years.)  That drop correlates almost exactly with a slight but steady increase in readership through my blog's RSS feed (see the Google Feedburner graph below), suggesting that what I lose here, I'm gaining there.  I suspect that regular readers are migrating to my RSS feed.  Occasional spikes represent individual posts that are linked by major sites such as Reddit or large blogs such as Ace Of Spades HQ, when my normal daily readership can jump significantly. 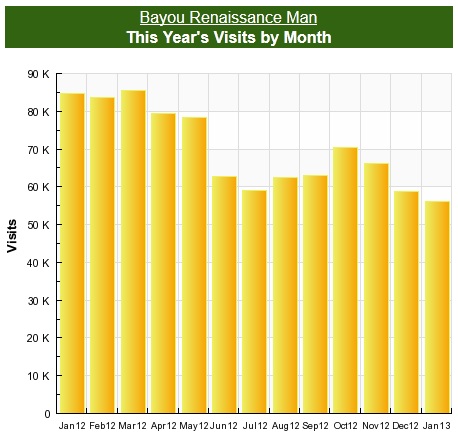 Next, Sitemeter. This shows a dramatic drop in visitors from about June, which finds some (but not exact) correlation in declining page views recorded by Blogger's own Stats tool.  However, it's not reflected to anything like the same extent by Google Analytics, and certainly isn't reflected in Google Feedburner (see below).  Why it's so marked in this measurement, but not in others, I don't know.

Finally, there's Google Feedburner, which measures only those readers arriving at this blog via its RSS feed.  (Sitemeter and Google Analytics don't measure these readers, except for a few they may catch in passing.)  I couldn't get this to show only the figures for 2012, so I've put up a graph showing overall progress since I began using this tool in August 2010.  As you can see, it shows a slow but steady increase over time, which has never fallen off at all.  I'm now at close to 1,000 visitors a day through this method of readership.

It's hard to pin down why there are discrepancies between these measurement tools.  Overall, I'd say the best method to determine your readership is to subscribe to at least two, and probably three, different tools, then average the results.  I use Sitemeter, Google Analytics and Blogger's built-in Stats tool, plus Google Feedburner to monitor readers using my RSS feed.  Overall, I've been holding steady at about 3,000 visitors per day (from all sources) for several months now.  Like some other bloggers, I've noticed a drop of about 15%-20% in non-regular visitors over the past few days, probably as a result of search engine 'tweaks'.  If this continues, it may affect my overall readership by about 10% - but there's no way of predicting that.  Readership might equally well increase, due to other factors.  Certainly, my regular readership (those who come here more than once or twice per week) continues to increase slowly but steadily.  The only decline is in one-off or occasional visitors.

(Of course, none of us are in some sort of readership race with one another.  I've never had as many readers as Tamara because - well, because Tam!  It doesn't matter whether we have more or less viewers than one another;  only that we blog because we enjoy it, and like sharing what takes our fancy with others.  If we entertain each other in the process, so much the better!)

Since I linked to a CNN article according to my blogger stats I have a bunch of those adsense optimizer sites linking to my blog and I've been getting a couple hundred hits from them a day. They don't show up in sitemeter though. In sitemeter I'm only getting 60-100 hits a day. Unless I get linked on one of my projects such as my KTD and UTD projects, then I get maybe 900 to 1100 hits for a day or so and it droops back off.

Honestly I would just like to know if people like what I write. Feedback even negative feedback improves a person's writing.

Your first figure needs to be defibrillated.

So, how are readers who use just the plain-vanilla Google Reader (http://reader.google.com) counted? I read your blog that way, but if I want to comment on a post, I click on the post title and directly visit the blog itself.