So much for banning standard-capacity magazines!


I'm sure readers are all too drearily familiar with the demands of gun-banners, including their wish for a ban on what they call 'high-capacity' magazines (which are really 'standard-capacity' magazines - those originally provided by the manufacturer for use with the weapon).  In the case of the ubiquitous AR-15 rifle, 'standard' magazines were originally 20-round capacity (as supplied with the first generation of the rifle in the 1960's).  One is shown on the left below.  The size was increased to 30-round capacity (shown on the right below) in the 1970's, after combat experience in Vietnam, and has remained at that capacity to the present day.  It's what our armed forces are currently using in their M4's and M16's. 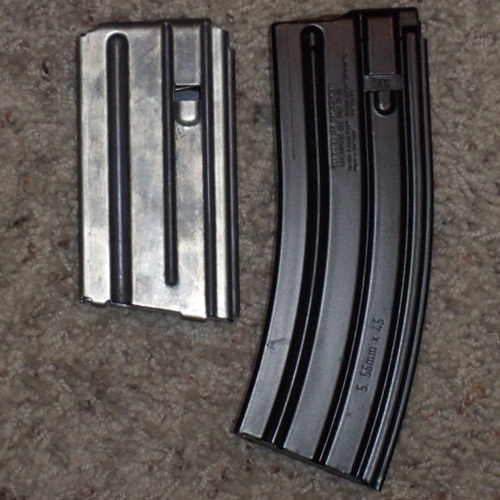 The gun-banners would dearly love to ban new sales of standard- and high-capacity magazines, and if possible confiscate all those already in circulation (a vain hope, given that there are millions and millions of them out there).  However, technology has now put paid to that hope.  Even if they succeeded in confiscating the lot, you can simply print more in your own home!

We've written about 3D printing on this blog on several occasions.  Now comes news that an enterprising team has produced fully functional plans to print your own 30-round AR-15 magazine, using a cheap 3D printer that anyone can operate from their home computer.  Here's one of the prototypes being tested. The developers have put up a description of how they did it, complete with photographs and video clips.  It's currently in two parts - click the links to view them.  More parts may follow.  The magazine has already proved fully functional, and the necessary files with instructions for the printer are already available for download.

It'll soon no longer matter if AR-15 factory magazines are taken off the market - enthusiasts will be able to print all they need for themselves (and their friends).  The same will undoubtedly be true in due course for many other models of rifle and handgun magazines.  They may not be of the same quality as factory magazines, but they'll work well enough and long enough to get the job done.  If one wears out - print another!

Too bad, gun-banners.  This genie's left the bottle, and you won't succeed in corking him up again!

Labels: Boys and their toys, Congratulations, Firearms, Security, Thank You, Useful
Email ThisBlogThis!Share to TwitterShare to FacebookShare to Pinterest

Soooo, will confiscation of PRINTERS be next???

Hmm, I remember when typewriters and mimeograph machines were restricted in some countries...

I find it interesting that the government of New York State thinks that the standard-size detachable magazines are *so evil* that they think you should have a year to sell them to people in neighboring states.