A blast from the past - naval history edition


The chase and sinking of the German battleship Bismarck was one of the highlights of naval combat in World War II.  Accompanying her for most of her maiden (and final) voyage was the heavy cruiser Prinz Eugen, one of five ships of the Admiral Hipper class.  In her prime, she was a powerful and good-looking ship, as seen below. 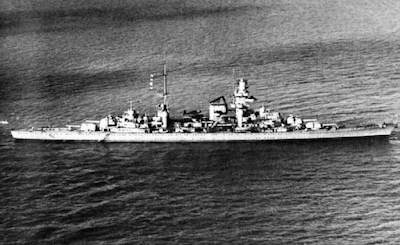 Prinz Eugen was captured by the Royal Navy at the end of the war, and handed over to the USA as part of war reparations.  She was used as a target in the 1946 nuclear tests at Bikini Atoll in the Pacific Ocean, and later sank in Kwajalein Atoll, where her wreck (shown below) is visible to this day. 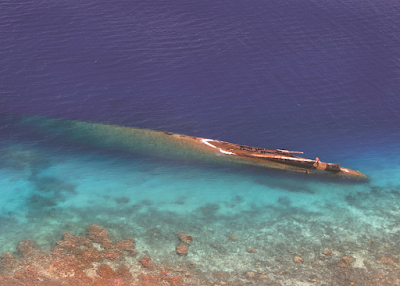 Here's a brief video overview of her life and death.

Despite what the narrator of that video claimed, she's no longer radioactive, and can be visited by divers.

Unfortunately, it seems a lot of oil was still in her fuel tanks when she sank;  and, as the wreck deteriorates, it's posing a pollution threat.  Therefore, Prinz Eugen finds herself in the headlines once again, more than seventy years after her demise.

The U.S. Navy, in partnership with the Army and the Republic of the Marshall Islands, have started the recovery of oil from the overturned World War II German heavy cruiser Prinz Eugen in the Kwajalein Atoll. 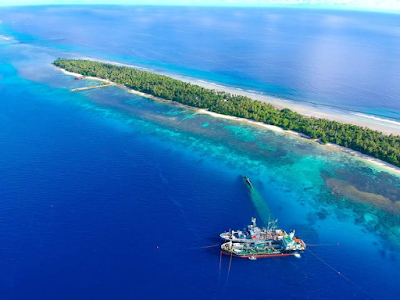 The wreck contained about 2,767 metric tons of oil when it sank, and an assessment of the wreckage has shown that there remains a high risk of a spill of more than 1,000 metric tons.

The oil removal operation is being performed by Naval Sea Systems Command, Office of the Supervisor of Salvage engineers and is expected to last until the end of October.

She served a very evil master in Adolf Hitler, but it's not like she had any choice in the matter.  It's still sad to see her - or any ship - in such a state.

The interesting part is that it is probably radioactive... Which is going to be a significant issue for recovery and disposal.

The amount of radioactivity is so small it's not even worth worrying about. She was radiated, and then towed to Kwajalein, where she broke loose in a heavy storm and sunk herself. The actions of some remediation done at Bikini, the storm, and the subsequent wave action over the years took all the sparky joy from her.

(My dad, the Air Force Liaison officer at Kwaj from June 70 to June 73, was responsible for the teams that monitored the radiation at Bikini and at Eugen. She was totally safe in 1970. So was the cement dome at Bikini, before it started cracking.)

One of the Eugen's screws was salvaged and is now a memorial in Germany.

The mitigation of fuel from WWII wrecks is something that is a problem both in the Pacific (notably the blood-fuel still leaking from USS Arizona) AND all along the east coast of... The United States. (For some reason, not going Blackout gave the Nazis a perfect shooting solution at night, thanks, FDR, ya jerk!)

Having touched the Eugen, and swum around her, I am glad that they are finally taking care of the leaking fuel. It was a slight issue in the 70's, and now it sounds like it has reached a critical stage.

The atoll lagoon, especially near the island of Kwajalein, is full of wrecks full of oil and explosives.

But it really is paradise on earth. I highly recommend it if you ever get the chance to TDY, get posted, or get to travel trough Kwajalein. Unfortunately, due to some of the things going on there at the catcher's mitt of the Western Test Range, you need some sort of clearance to visit. But do so, if you can!

Oh, and to add to the above, I always felt that She broke loose and sunk herself. It's the romantic in me. Dying a noble death rather than being sunk for testing or taken to the breakers like so many of her sisters and brothers the world over. At least she died a fighter, rather than having her soul ripped out of her slowly with her dying screams being sounded by chop saws and cutters, or by the blasts of technicians and scientists.

Feel the same way about all the planes we've killed ignobly over the years, too. I am sure OldNFO cringes and part of him dies every time one of his Orions is demolished.

From a technical standpoint, this is going to be challenging. The hull will have deteriorated, and the fuel mostly solidified, so the salvage team will have to make through-hull pressure fittings and either place heating coils or pump hot water into the tanks to collect the #6 oil.
Bunker-C becomes unpumpable somewhere around 70 degrees F, so in tropical seawater it will still be highly resistant to flow, but since it was cut with diesel for the Navy's particular usual blend, the diesel portion is going to be harder to contain.

I know that the technology to do this and the procedures are already in practice and established, but the age of the wreck and location creates some interesting technical challenges.

I like that it was the USS Prinz Eugen (IX-300) in its last few years.
Wonder what a Prinz Eugen labeled flat hat would go for today?