The Kavanaugh accusation: "In war, truth is the first casualty"


That saying comes from the Greek playwright Aeschylus.  It's particularly apt in the case of the allegations leveled against Brett Kavanaugh during the confirmation hearings for his nomination as a justice of the US Supreme Court.  They've proved to be nothing less than a war on him by the Democratic Party, acting as a spokesperson for every left-wing and progressive group in this country.

I think the allegations raised by Prof. Ford are absolute nonsense.  Quite apart from their vagueness and lack of detail, they're overwhelmingly at odds with everything else we've learned about Mr. Kavanaugh during months of investigations.  What's more, the way in which they've been handled is profoundly suspect.  Far from her claimed desire for anonymity, she appears to have contacted news media months ago, and also scrubbed her social media accounts at the same time of material that shows her to be a far-left-wing activist.

I think Karl Denninger puts the situation in its proper perspective.

There are several possibilities:

1. She was assaulted, and by Kavanaugh.  In other words, her account is accurate.

2. She was not assaulted; the "playing around" was sexual, was consensual at some point, she stopped consenting and so did the sexual escapades while her clothes were still on.  But now, being a hard-left "professor", an avowed activist who has attempted to conceal that fact by sanitizing her social media (gee, why, if it's not material?) she suddenly changes her mind about kissing a boy and playing "grinder" with him 35 years later.

3. She was assaulted but it was not Kavanaugh and 35 years later he's convenient to attack because she hates him and his political stance; 35 years prior he was perhaps somewhere within 10 or 20 miles at the time and he can't prove otherwise.

4. There was a party, she was (perhaps) drinking, others were (probably) drinking, everyone had fun and went home, but she was bent about words exchanged or being jilted and turned it into "assaulted" over the space of 35 years.  Think that doesn't happen?  Yes it does, and it sometimes doesn't take 35 years either; who remembers the Duke LaCrosse team accused by a stripper of gang-rape that, by all evidence, never happened at all?  Or shall we discuss Tawana Brawley?

Note that none of those means you fail a polygraph, by the way -- especially if you have months to study for it and practice -- and are trained in psychological responses.  Nor do we have the questions and the raw data.  So the value of said "event" (the polygraph) is zero.  The best polygraphs are not infallible -- and when taken by the interested party with a hand-picked examiner and questions are in fact worthless.

The other person accused of being there denies that anything of that sort ever happened at all.  In other words, not 1 or 2.  Either 3, 4, or it was made up entirely.

Now add into the mix this: The alleged "victim" has more animus and thus reason to lie as a consequence of her political orientation and advocacy than did the Duke LaCrosse stripper.  That may have simply been a matter of not getting a "respectful enough" tip for her dancing gig.

Finally, it appears she told nobody at the time -- not even her best (female) friend.  How many women tell nobody about an incomplete assault like this -- or any other incident when they have a bad time at a party?  None.  Ever.  Unless they have no friends.  But I'll assume she did, and like every other young woman of that time and the current time, told her bestie(s) everything.  Especially something like this.  If it happened, that is.

Sexual assault is serious whether incomplete and attempted or completed sexual assault.  But there's no evidence to back up this claim, there's no pattern of behavior, there are dozens of women who have known Kavanaugh since High School and have said nothing of that sort was ever perpetrated by him to their knowledge or with or against them and the accuser lacks any ability to provide any sort of evidence at all nor can she even tell anyone why she was at the alleged location, how it was organized, it's purpose or what she was doing before and during the event in question despite wearing a one-piece bathing suit under street clothes -- and she claims he allegedly tried to remove the suit first (what?)

Oh, and both the accuser and Feinswine are known to want to derail Kavanaugh by any means possible -- Feinswine has specifically so-stated, yet she sat on the very thing that could have done so for two months.  This implies that she knows the claim is false because otherwise she would have been best served in her interests, which she has publicly stated, by immediately both releasing it and forcing an investigation -- in July.

Oh - and about those 65 women who've come out in support of Mr. Kavanaugh?  Miguel at Gun Free Zone raises an important point.

The Trial is my favorite Kafka book.

It is the story of a man, Josef K., who is arrested and tried by a unidentified goverment agency for an undisclosed crime, and in a total perversion of justice, every argument for his defense is turned into evidence of his guilt.

The Trial is where we get the name for a type of logical fallacy, or argument in bad faith, called kafkatrapping.

Kaivan Shroff is a Democrat political activist.  He sent out a Tweet which was retweeted by Fred Guttenberg, which was then retweeted by David Hogg, which is how I found it. 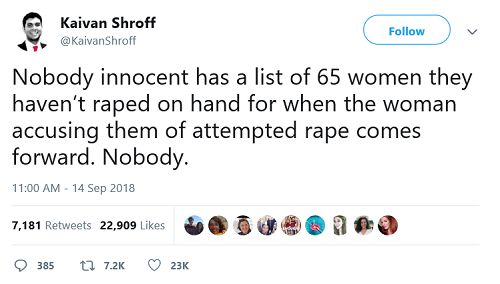 Do you understand it?

The Left: “Only a guilty person would think about having an alibi.  Guilty!”


We are approaching a the cartridge box fix at breakneck speed.  Once this perversion goes from court of public opinion to actual court, or in the case of Kavanaugh, a hearing, justice in America is doomed.

The courtroom will become a Chinese Finger Trap where the more you fight to prove your innocence, the more the prosecution says that proves you are guilty.

This is a purely evil as things can get.

I agree with both Mr. Denninger and with Miguel.  I believe Prof. Ford's allegations are without substance, and are impossible to prove;  therefore, the only reason they can have been raised is a last, desperate attempt by the left to prevent Mr. Kavanaugh from being confirmed as a US Supreme Court justice.

I hope that the Senate will judge them, and Mr. Kavanaugh, accordingly . . . but in today's supercharged partisan political atmosphere, who knows?

Those of us who care about truth and justice should be praying, I think - and contacting our Senators while we're at it.

Another item: this happened when he was 17. Had be been arrested, tried, and convicted as a juvenile (quite possible for someone who had no other criminal record), those criminal records would have been sealed going into adulthood. It wouldn't have followed him around. Combine that with a lack of anything pointing to a pattern of behavior, and I tend to think that the truth of the claims is just about beside the point. Maybe she's telling the truth, maybe she believes she's telling the truth, maybe she's a good liar. Doesn't matter- a single incident that happened in one's youth does not define one's existence, especially without any other evidence backing it up.

But yeah- the unhinged nature of the left is getting to the point where nothing more than mob rule without any consideration for due process is acceptable to them. That's scary.

It has also come out (via Instapundit) that Kavanaugh's mother was the judge in bankruptcy proceedings against the accuser's parents, so there's the potent for personal animosity there.

It also came out elsewhere that 2012, when the accuser "suddenly" remember the assault in couples' therapy (without actually naming Kavanaugh) coincided with Kavanaugh's name arising as a possible Supreme Court appointee by Mitt Romney. Liberals then thought a Kavanaugh appointment destroy their policies. Pretty amazing coincidence, there.

"would destroy their policies" -- sorry about that, and for the other typos.

Rules of politics for the pragmatic:
Don't believe any "October surprise". Even if it comes out in September.
Don't believe any allegation that comes out at the last minute in any sort of contentious hearing unless there's a solid verifiable history stretching back a long time.
Pay attention months before the election, stop listening to anything one month before the election. The signal to noise ratio goes negative. (Note for non-technical types: the amount of BS exceeds the amount of anything worth hearing)

Quick correction: That was posted by J.Kb. not me. You can tell because he writes pretty :)


Thanks for the linky love... Man that is an outdated term

So the Left suddenly cares about alleged assaults? They'd better put some ice on that.

And inspired, thank you Peter.

The left always attempts to repeat tactics that have worked in the past.
Here in Alabama we needed to fill the Senate seat vacated by Jeff Sessions. Several good choices going into the primary.
Massive crossover voting by Democrats in the Republican primary resulted in Roy Moore getting the nod.
Immediately after the primary allegations surfaced about Moore as a young single man having a penchant for dating teenage girls thirty years before. With the consent and approval of said girls' parents by the way.
Naturally the left painted Moore as a flaming pedophile which, along with the sad truth that he was a weak candidate to begin with, resulted in one of the reddest of states now having a Democrat as senator. Who of course once he arrived in DC joined his Democratic brethren to vote on strict party lines. The Sessions term he's filling in for is up in 2020 and he will get the boot at that time, but once again dirty tricks cost the Republicans a seat at a very critical time.

What SiGraybeard said...and why if it didn't work the first time they used it, are they still using the same tactic this time...shades of Einstein's definition of insanity. Just because they are morally corrupt doesn't mean everybody else is.

All I have to say is those republicans better stay solid behind Mr. Kavanaugh. I am tired of RINOs.

He's from Arizona, right? Hard to believe. If I lived there, I'd vote him out.

Linda, you wouldn't get the chance since he's not running this year. He's tossed in his towel.

Hope everyone knows where THEIR towel is. Gonna be a fun fall!!

I believr that those women who signed a letter saying Kavenaugh is the decent man we believe him to be are actually saying the accuser was well known in their social circle as a fabulist, so her accusations are false….they just can’t say that directly; the social contract won’t let them call her out explicitly, so they do the next best thing. And those within that circle who know how the game is played know exactly what was conveyed.

@LindaG, you could not vote Flake out, he realized he wasn't going to win the primary and isn't running for re-election.

I find this impossible to believe. She teaches clinical psychology. One would think that a person in her profession would seek professional help early on.

Also, perhaps I am wrong, but I was under the impression that certain mental health professionals are required to have annual (or some other periodic) psychiatric or psychological evaluation.

And anyone who thinks we aren't in a (civil) war has been asleep for 20 years. The problem is that only one side has been shooting back.