For those who missed the news:

Sen. Mazie Hirono (D-HI) told men to "shut up and step up" when it comes to Brett Kavanaugh's sexual assault accusation. Asked whether her being one of four women on the Senate Judiciary Committee impacts the Kavanaugh confirmation proceedings, Senator Hirono says, "I just want to say to the men of this country: Just shut up and step up. Do the right thing for a change."

"We have to create an environment where women can come forward and be heard and be listened to. I want to thank Dr. Ford. I commend her courage. I believe her," the Senator said.

So we (men, that is) are supposed to give a free pass to the accuser, in spite of the many and (very) well-founded doubts about her accusations?  Oh, hell, no!  As the Victory Girls blog points out:

You see Mazie, here’s the thing, if men had stayed silent, then we would never know that:

The Duke Lacrosse story was a complete hoax
Mattress Girl lied about everything
Rolling Stone helped Jackie Coakley throw the men at UVA under the bus
Malik St. Hilaire was one of two young men at Sacred Heart University falsely accused of rape by Nikki Yovino.

Hey Mazie, by telling men to SHUT UP, you are saying to Malik and all the others that they should’ve just dealt with their names being dragged through the mud. They should’ve just given up and had their honor and reputations forever soiled because of false accusations. Yeah…NO.


What people of Sen. Hirono's ilk are saying is that the accuser should be given credibility purely and simply because she is a woman.  The Senator is far from alone in that perspective.  For example (clickit to biggit): 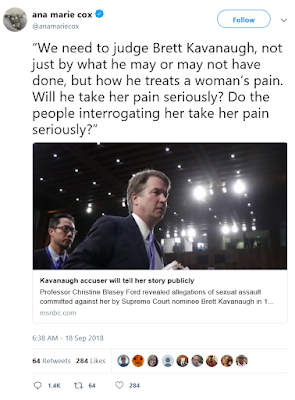 Ms. Cox, I'm not interested in "taking her pain seriously":  I'm interested in taking her accusations seriously.  So far, they're anything but convincing, having emerged from a far-left, progressive activist after well over 30 years, never having been raised in Mr. Kavanaugh's earlier confirmation hearings for the DC Circuit Court several years ago, and never having come to light at all in his long and distinguished career as a public servant.  What's more, his accuser's evident reluctance to state her case in public, without preconditions, in Mr. Kavanaugh's presence, and subject to cross-examination, is highly suspect from a legal perspective (despite allegations from her supporters that her hesitation is on personal rather than legal grounds).  How did then-Senator (later President) Truman put it?  "If you can't stand the heat, get out of the kitchen".  Oops.  (And yes, his name was Tru-man.  Get over it.)

EDITED TO ADD:  And while we're at it, let's be logically consistent.  If we're to believe Mr. Kavanaugh's accuser just because she's a woman, and "feel her pain" . . . how about doing exactly the same thing for those women who accused former President Clinton of sexual misconduct?  How about it, Senator?  How about it, Ms. Cox?  Do I hear "Amen"? . . . [crickets] . . .

Mr. Kavanaugh's nomination is (or should be) the subject of factual debate - not feelings.  I am not prepared to give any weight or credence to how anyone feels about him.  I want to know his track record, his views, his personal as well as his professional background . . . and I want to be able to verify every detail about them, so that he is assessed on the basis of fact, not feeling;  truth, not innuendo;  verifiable evidence, not unverified insinuations.  Those factors have nothing to do with anyone's sex, gender, age, qualifications, or whatever.  I will not give any added credence or weight to either side, or any individual, unless and until they are on the table to be assessed.

Right now, in the absence of any confirmatory evidence at all, I don't believe the allegations against Mr. Kavanaugh.  If that is to change, there'd better be a lot more to this than vague, unverifiable histrionics.  Unless and until then, as far as I'm concerned, they should not be taken into account at all.  Honesty and justice demand nothing less.

I warned folks that after Roy Moore this would become standard operating procedure for the left.

If you didn't complain about it those many years ago when it supposedly happened, shut up about it know.

Sen. Hirono, you do the right thing: Believe those women who accused Bill Clinton of sexual assault. Or you shut up.

This should never have gone this far. The hearings should have been stopped the day the democrats paid protesters to disrupt them. The vote on the nomination should have been held immediately the next morning.

She had 36 years to come forward, and according to reports, she doesn't remember much of anything, except she only drank one beer. Any prosecutor would never try to seek an indictment without any evidence, witnesses or key information on the event.

Have the vote, and see if the Republicans decided to grow a pair.

Yah, well, what do "honesty and justice" have to do with Government?

It's not about logic, it's about feelings. Lots of lefties are feeling bad because they think he will be the 5th vote to overturn Roe v. Wade. The logical implication is that lefties will do this to *any* nominee because they will feel the same way, so may as well confirm him.

I like the Sean Hannity approach: Make a false allegation, I will come after you with every thing I have, to take everything you have. No one is talking about Sean being a bad boy any more, are they?

Senator Hirono, how about Rep Ellison's ex-girlfriend's abuse allegations? She has times, dates and medical records! Ms. Ford has none of that, but we should believe her and not Ms. Monahan?

They need to get on with the confirmation vote already. I am beyond annoyed that they let this grandstanding interfere with the process.

The democrats win again by any delay. Annoying.
I am certain that if anything did happen, it was not by Judge Kavanaugh.

All these stupid women pulling this "Holier than thou" additude make me mad.

Case #1, accuser is telling the absolute truth. Drunken high school boy groped her, made her feel threatened, but no actual rape or physical damage occurred. Boy then went on to live an exemplary life for the next 36 years. So of course the left demands his crucifixion.
Case #2, accuser was attacked much as her story says by someone. But she has solid reasons for animus against the Kavenaugh family stemming from a foreclosure case mother K. sat on. And she has a long history of left wing involvement. And since wishing can often make it so in a troubled mind, it just so happens this is the perfect time to go public.
Case #3, complete put up job. Accuser is a solid left wing progressive Democrat who hates everything Kavenaugh stands for. She’s drunk the kool-aid about internment camps for gays, overturn of Roe, cheap assault weapons available to everyone from early teens on up. She can conflate an unpleasant experience from her youth into an accusation that is impossible to either confirm or refute. Huge win for her side.

It looks like this accusation was a "just in case" in case Mitt Romney won, and when he didn't, it was put on the back burner. Which as Nate has noted, has become standard procedure for the Democrats. Now that Kavanaugh is in the final hearings, and after the August vetting where she should have come forward, we have the "October Surprise" to try and throw the nomination. Although I agree with people who say this is intended to push the vote past the November election.

"Shut up," she explained.