The T-X competition has a winner, and it's a good one


It seems the Boeing/Saab T-X has won the competition to provide the USAF with its next-generation advanced training aircraft. 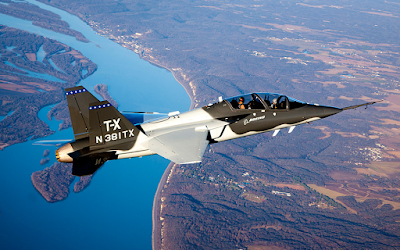 Here's a brief video showing one of the T-X prototypes taking off, and performing a roll.

I think it's a great choice, for three reasons.

I expect Lockheed Martin (and, perhaps, Leonardo) will protest the award, which promises to be worth billions of dollars to the winner;  but I think the right plane won this competition.  It's a generation ahead of all its competitors.  That counts for a lot, IMHO.

The F-20 was a fantastic bird, but it failed in one critical aspect: no congressmen were in Northrop's pocket, so the F-16 remained the export fighter of choice, and the F-20 disappeared without a trace.

The first thing I thought when I saw that pic of the T-X, is that it looks like the son of the T-38, just with a split tail.

Of course they will protest... sigh

What is it's radar profile..... With the capabilities of stealth fighters.....not just ours but the Russian and Chinese variants ALL new fighter/air superiority platforms MUST be hard to see on radar. And with sixth generation UNMANNED craft with capabilities no manned craft can hope to match just around the corner stealth becomes mandatory.

Stealth is a myth, and a vanishing one.

It worked for awhile, but workarounds have already been fielded.

supposedly, radar experts have recently stated that new forms of radar in the works eliminate the ability of shape (and to some un-detailed degree of coatings) to hide a reflection. So, the much heralded F-35 becomes a long distance missile delivery system, that is so much dog meat in a close fight. Huge waste of money and time on that POS. I'm thinking the Fighter Mafia may suffer a fatal hit over the flack from this screwup. They deserve it. Idiots.

A tactical version is a logical step, bringing back the A-4/A-37/A-7 sized plane and capabilities. Would be great for coastal interdiction or in a low intensity conflict where you need something between a Super-Tocano type bird and a full-sized fighter/A-10 plane.

Finally. A light plane with lots of internal room to grow. Let's hope they don't have the same onboard oxygen problem of the Navy's planes.

Weapons development is an endless cycle of improvement and counters since Oog first tied a rock to a stick to get better reach than Thag with just his rock. The trick is to be on the foreword edge of development not heavily invested in the last war's technology. Training aircraft don't need to be stealthy, they just need to get the trainees up to speed (no pun intended) with the performance and quirks of front line aircraft without killing too many of them in the process.

Stealth is NOT going away. It will change....but it will never be unimportant.

nothing at all to do with planes but I remember working at SPAWARSYSCOM and being told that we should follow the air force acquisition process and color code our reviews of the various proposals we got from contractors in response to RFP. You know, don't use actual numbers but use colors instead. I was never clear on how the colors ranked themselves to allow the contracting oficer to decide which was best. I suppose these days it would be brown.