I'm finding the signals concerning the forthcoming mid-term elections to be decidedly mixed at present.

On the one hand, you have the mainstream media conducting their polls, confidently predicting that the Democratic Party will dominate and take over Congress at least, and possibly even the Senate as well.  For example:

With their supporters energized in opposition to Donald Trump, Democrats hold their widest advantage in midterm election vote preferences since 2006, when they seized control of both houses of Congress.

Rebounding from a tighter contest in the spring, Democratic House candidates now lead their Republican opponents nationally by 52-38 percent among registered voters in a new ABC News/Washington Post poll – a lead that holds up across a range of likely voter models.

Surpassing that Democratic lead in vote choice, 60 percent of registered voters say they’d rather see the next Congress controlled by the Democrats, as a check on Trump, than by the GOP, to support Trump’s agenda. Preference for Democratic control is up 8 points from a year ago.

I can't help but recall that these same news organizations were among those that scoffed at the possibility of President Trump winning the 2016 election.  "Hillary can't lose!"  Yeah, right.  I also note the reference to "Trump's broad unpopularity".  That makes me question the entire poll, because among his base, it seems the President is anything but unpopular.  For example:

There is a very specific reason why U.S. print and broadcast media focused intensely on pushing their anti-Trump funeralpalozza narrative.  As we saw in the 2016 election cycle, the goal of the DC proletariat is to create a false sense of the electoral landscape.

What they don’t want people to see are reports like this. Last Thursday night’s President Trump rally drew the Ford Center’s largest crowd ever, according to manager VenuWorks. The turnout: 11,500 people, with another 2,000 unable to get in.

Just like there was no precedent for a single primary candidate -amid a group of 17-  to draw 15,000 people to any event in 2015, so too is there no precedent for 13,500 people showing up to a political rally during a non-presidential mid-term election season.

Look carefully.  Do not look away.  This is President Obama’s former campaign manager David Plouffe.  Think about the message here . . . “his kind”: 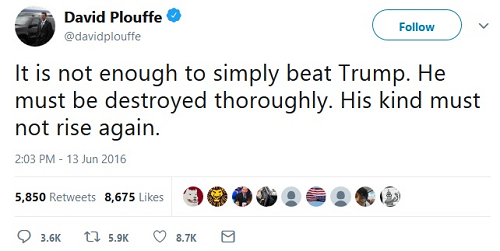 So, which is it?  An all-but-certain Democratic "blue wave" that will sweep them to control of Congress, allow them to impeach the President, and guarantee the obstruction of his agenda at every turn?  Or an energized Trumpian base that will push back, turn out to vote in numbers at least as large as they did in 2016, and provide enough votes to keep Congress Republican?  I just don't know.  The signals are very mixed.  Who to believe?  Who to trust?

I'll be interested to hear from you, dear readers.  In your part of the country, what are you seeing and hearing?  What are your neighbors, associates, co-workers, and so on saying about this election?  What's the local mood?  If enough of us leave a comment with that information, perhaps we can all get a better sense of what may happen.  I hope so, anyway.

The Blue Wave is inevitable. Inevitable, I say! The Democrats will sweep the elections, especially with the over 110 age bracket marching in lockstep to the voting booth along with the millions of True Blue Voters that can't speak English and wave Mexican flags. They will take the House and Senate, and impeach Trump. Then they will impeach Pence. Nancy Pelosi will become President, and select Hillary Clinton as her vice president. Nancy will then step down and go back to the Speaker position, making Hillary the President of the United States!!1!

Impeach Trump on what charges, you ask? Why, colluding with Russia, of course! Mueller will have manu... I mean found the evidence needed, and it will be clear to all that he is a heinous criminal of the worst type. Any other outcome is inconceivable. Inconceivable!

There are some things about his presidential deportment I surely would like President Trump to change, but I am more disgusted with the the onslaught of the media anti-Trump rhetoric. I am at a point that I do not care to discuss politics or watch any news at all. Blue Wave?? I would be surprised it that happens. As for me, I would never EVER vote for a liberal/progressive candidate. I am glad that I am nearing my 70th decade and will not likely see the horror that I fear is heading America’s way, but I am deeply saddened for my children and grandchildren and the world they will inhabit.

Since the media hasn't learned a thing, apparently, since Harry Truman's election. That being, if the sampling is skewed then the results will be skewed. If you only talk to like-minded people...

Add to this, the average Joe or Jane has learned not to say what they really think or feel if they want to keep their livelihoods. Does anybody really think a pollster is going to get an honest answer? I hang up when one calls?

All any of us can hope for is everybody still remembers the sting of the contempt the political class has for the working American and get ourselves to the polls and express our opinions about 'The Swamp' again and again.

I work in the "Peoples' Republic of Massachusetts" so I don't know how much I have to offer on co-workers (though the few closeted conservatives I know are determined to not let this election slide).

I'm thinking the McCain/Wellstone funeral is going to increase the turn out of right-thinking Americans.

As if I listen to what the party faithful spout? OF COURSE they're optimistic!!

but control of Congress is not a single national vote, it's 435 individual votes, and you can loose 200+ of them 99-1 and win the remainder 51-49 and still retain control.

I expect results more resembling this than the post Clinton/Obama case where the Democrats won everything up through the White House in one election, and were decisively thrown out the next election.

And on the Senate side, 25 out of 33 incumbents being Democrats leaves very little room for a Blue wave there.

I would say most people I talk too, support Trump and don't talk about it in polite company (since most democrats aren't polite). I would say that I see more people feign indifference to Trump openly, but really like what he is doing, when they talk with other like minded folks. It's just easier to go along, because no matter what, you can't win an argument with Trump is a meanie.

Senator Chuck Schumer is doing his level best to drive the last nail int the coffin that once was the Democratic party. Throwing a temper tantrum over the most qualified Supreme Court Justice nominee looks really bad.

They really believe trump and his supporters are an existential threat and are acting accordingly. I'm in a purple county in a blue state. My friends on the right are saying the candidates on the right aren't good enough or are chill thinking the left is all noise. My friends on the left are taking off work on election day to drive people without cars to the polls to vote dem. And they are asking if I want to too. They are recruiting (framing it as help people exercise their right to vote). So each of them will probably help add another 5-10 votes. The left is motivated and taking it dead seriously. The right seems complacent. From what I'm seeing here I am expecting congress to flip.

If you think of Leftists as MISSIONARIES determined to create a Socialist Utopia on earth, virtually everything they say and do makes sense.