The joys of car-shopping (NOT!)


Miss D. and I finally have a new-to-us set of wheels, after a couple of months of searching.

We both have partial physical disabilities;  my lower back and left leg, and her right knee.  That made it very important that whatever we bought had to be comfortable for both of us - and our comfort zones are not alike.  It's tricky to find a vehicle that "fits" both of us.  One that I like might not suit her, and vice versa.  Added to that is a certain amount of cultural conditioning.  For example, I find minivans very comfortable and practical, but she absolutely rejects the "soccer mom" stereotype that allegedly goes with them.  (I don't think it does, necessarily - a couple of the most "manly men" that I know are quite happy driving minivans - but that didn't convince her.)

We particularly wanted something that would be very comfortable on long journeys.  We prefer to drive, rather than fly, whenever possible, because we regard the TSA as nothing more than "security theater", as well as an unwarrantable intrusion into our privacy.  (How many terror attacks has the TSA prevented?  None, as far as anyone knows.)  That requirement ruled out many contenders.  We rented a number of different vehicles for trips to Tennessee (for LibertyCon), Colorado (for our annual Blogorado gathering) and other distant states over the past couple of years.  Some we liked, some we didn't.  That gave us a baseline of things to look for.

Neither of us wanted to spend too much money right now.  We'd rather pay down our house note, with the objective of paying it off within ten years.  Besides, the price of vehicles right now, new and used, is ridiculously high, and I don't regard them as value for money.  However, our existing vehicles are both well over a decade old, and not very comfortable for the long haul.  Also, the thought of continuing to rent vehicles for long-distance travel persuaded us that it would be better to invest that money in something that would, at least, be ours.  We ruled out a new vehicle, for cost reasons, and began to look for a lightly used one.

I researched prices and features very carefully for a couple of months, enlisting the help of Kelly Blue Book (KBB), the National Auto Dealers Association (NADA), and Edmunds to determine fair market values and prices.  To my frustration, almost every dealer was asking more than that for their stock.  When I challenged them, pointing out the discrepancy, they either said that they used a different price grading system (which they would never disclose), or tried to justify the price for this or that reason, or offered a discount that still didn't match true market value.  I grew very jaded.  However, we finally found what we wanted (and could afford) at a local dealer.  After a little negotiation, their price was right in the middle of the range that all three reference sources expected the vehicle to cost.  We "bit the bullet", and drove home in a few-years-old Nissan Pathfinder, similar (but not identical) to this one. 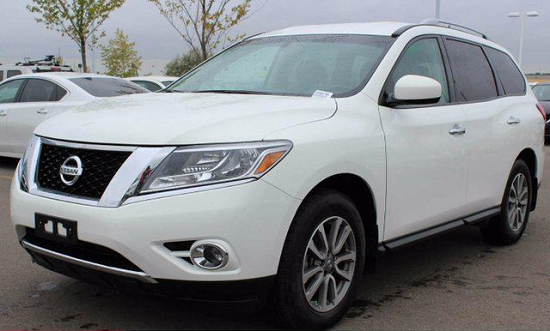 I think it'll suit us very well.  It's not the highest-rated crossover SUV, according to reviews, but both Miss D. and myself find the seats and the ride very comfortable, and it has all the bells and whistles we need (and quite a few we don't).  We hadn't planned on buying an upscale model, but it happened to be available at the right price, so that's a pleasant bonus.  An added advantage, from my point of view, is that Nissan's 3.5-liter engine and CVT gearbox have been used in all sorts of different models for several years.  After a couple of initial hiccups, they've established a pretty bulletproof reputation for reliability, according to local mechanics, which bodes well from a maintenance point of view.

Now, let's see if we can get it to last as long as our other vehicles.  If it does, it'll be money well spent.

Labels: Automotive, Boys and their toys, Business and Commerce, Idle chatter, Travel
Email ThisBlogThis!Share to TwitterShare to FacebookShare to Pinterest

I drive a venerable European market Nissan, with one of the first iterations of the CVT, and I am pretty happy with it.

She can avoid the "soccer mom" designation by removing the back seats and carpeting the whole back end... Just a thought. She might not go for that.

Mirror on the ceiling, etc. ;)

Good choice. When I was a used car manager we spent far less getting Nissans front line ready.

Good that you shipped around and got something used, Nissans are underrated kinda like Fords, and buying a used one has someone else pay the depreciation.

When shopping to replace the 20 year old GMC Safari, my requirements were simple. Less than 3 years old. Must have rear door high enough for a powered wheelchair. Must have passenger seat at roughly same height as wheelchair seat, for to transfer back and forth. Must not have any powered ramp/lift/hoist, but have room for manual ramp. Must have factory warranty with option to buy extended.

We settled on a mini-euro van. A Fiat product built in Turkey, with an American brand.

Fortunately my wife has always gone for function over form, though form is a requirement - no totally butt-ugly vehicle.

I find that a seat at chair height, not having to climb up to or fall down to, is a very nice thing.

Nissans have a great rating, never met anyone who didn't love them. Congrats to you and your lady.

A note to the discerning car buyer. When shopping pay special interest to the up-scale models. Luxury loses it's value quickly and those who buy the up-scale new don't buy used. Lesser quality used might be cheaper but used luxury cars are nearly always a better value to cost deal.

Good choice! I'm in the same camp on the minivan thing. I think this one should serve you well.

I'm in a similar predicament. And, as much as I like 5-speed manual trashmissions for the simplicity, arthritis says "awfulmagic instead."

My goal is a low mileage 4-5 year old Tacoma 2WD extra (crew) cab, with the 3.4L 6 - that engine's been around forever - the suburbanite's "not a pickup truck" with seating for 5 and an extra large, open trunk.

Speaking of which, watching Amazon's Jack Ryan, it appears the Hilux and Tacoma are now the same. Always wanted one of the older Hiluxs with the diesel, but they were never imported to the US and rare selsewhere.

I don't understand the aversion to minivans.....ok they don't corner as well as sedans but no worse than SUVs. And most have power a plenty. Sliding doors are ace. And speed limit plus 15 won't generally get pulled over, unlike truck, SUV, sedan or other because minivan. The ultimate sleeper.