I was very angry to read about a misappropriated photograph for a very controversial advertisement.

Last month, "Shout Your Abortion," a pro-abortion organization who seeks to normalize the killing of children, published a story to their website titled, “I am 23 and I have had 3 abortions. YES I HAVE!” 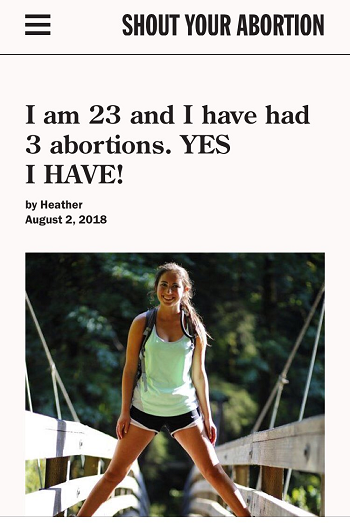 The story was purportedly submitted by a woman named Heather. Readers were made to believe the cover image was one of the writer, but it has since been discovered the photo was stolen.

"My name is Molly. I am 24 and want to make it clear that I have never had an abortion. I was horrified to wake up yesterday and learn that a photo of me was stolen and used without my permission or knowledge on a post for “Shout Your Abortion,” a website that encourages women to share the stories of their abortions,” Schaap states.


Molly goes on to reveal she is actually very pro-life and has even donated to pro-life causes.

I think the misappropriation of Molly's photograph was unconscionable, given the controversy surrounding the subject.  Her image was the target of many crude, vitriolic comments after it was published, and she may have to endure the fallout from such reactions for years to come.  She's being very Christian and forgiving in her comments (see the link above), but that won't stop her being persecuted for something she didn't do.

What's more, one can't help but suspect that her image was deliberately chosen for such misuse because of her views on abortion.  I wouldn't be surprised if it was intended to shame or embarrass her.  Although politics isn't as controversial as abortion, it's as if a dedicated Republican's photograph was used as a fake endorsement for a Democrat, or vice versa.  If such lies are not acceptable political tactics, why should they be over so highly charged a topic as abortion?

Finally, of course, if "Shout Your Abortion" is willing to use and/or allow and/or endorse such tactics, it speaks volumes about that organization's ethics and standards - none of it encouraging.  If people can't honestly put forward their position, but are willing to lie and misrepresent the facts in order to get it across, they certainly don't deserve our trust - much less our support.

Think of the logic, if it can be labeled as such, of the entire premise of Shout Your Abortion.
I cannot imagine the sort of mindset where a young woman is proud to admit that she both sleeps around, and is incompetent in the proper use of birth control.
I believe this to be a perfect case for the use of the classic Dan Ackroyd quote from Saturday Night Live: "Jane, you ignorant slut!"

As always, always with the progressives, any act is acceptable to present or support their views. They have no shame, no sense of decency.

Before the last election, I said to some Hillary supporters, " So you support Hillary. That means you are willing to lie, cheat, and steal just like her, Bill, and all of her associates. I'm glad I don't do business with you. " No, none of them speak to me anymore.

"Proper use of birth control"?

Q: What do you call people who rely on birth control?
A: Parents

But just imagine the 'outrage' if there was a Shoot Your Thief.

Roe v. Wade was a criminal case. There’s a lot of really bad information about it.

Think before you comment there. It’s a legal blog and the owner has a very low bar for what he considers stupid or off-topic comments.

Doing that with someone's photo is unconscionable! That was an act of evil in today's world.

As to the rest of the controversy...it's about control.
People who for their own reasons want to control what their neighbors can & cannot do & own.
Guns, your own body, alcohol, beliefs, drugs & in this modern world some what to control what people think.

Remember, Leftists are missionaries for a Socialist Utopia-on-Earth.

Because they believe they are angels working towards paradise, the end justifies any means.

I see a lawsuit in her future...

The picture and story appear to have been removed from Shout Your Abortion's web site.

Before people go too far condemning the organization, they appear to be asking people to tell their story and then they post it and potentially include it in a book. I've seen a similar scheme claiming to be doing a book about survivors of sexual abuse.

It's quite likely the photo was sent by whoever wrote the story and Shout Your Abortion simply posted it, in which case it's the story author "Heather", not the organization, who picked a random photo.

For conspiracy theorists, it's also possible that the story and photo were sent to Shout Your Abortion purely for the purpose of then "exposing" them and generating bad press for the group. Anything having to do with abortion tends to bring out people's less civil aspects.

And it's possible that Shout Your Abortion grabbed some photo, made up a story, and used it.

With the Internet it's easy for this to happen and very hard to track down the real story. Since "confirmation bias" will cause many in this group to automatically condemn Shout Your Abortion I'd suggest taking a minute to realize this is not necessarily a pro-abortion group appropriating photos off the Internet.

Then kudos for removing the story. Whether it was removed because of honesty or just receiving all sorts of flack - it WAS removed.

The levels of birth control
1. Do not engage in PIV sex.
2. Use doctor administered pill or IUD.
3. Use a condom.
4. Oops, got carried away, use the morning after pill.
5. None of the above worked so I'll just get an abortion.

She's Canadian? Well she should file a human right complaint. Let's see if her province's human right tribunal will award her exemplary damages as well as a permanent injunction against her picture being used.

Some lawfare is what that organization deserves.