The best response yet to Swetnick (and Ford, and Ramirez, et al)


The latest allegations against Judge Kavanaugh are so ridiculous, so over-the-top, that any person with two working brain cells to rub together can see them for the lies they are.  They're nauseating.  I think the best point-by-point rebuttal comes from Twitter user Benny Johnson.  Follow the string for yourself at that link, if you wish.  Here are the screen captures. 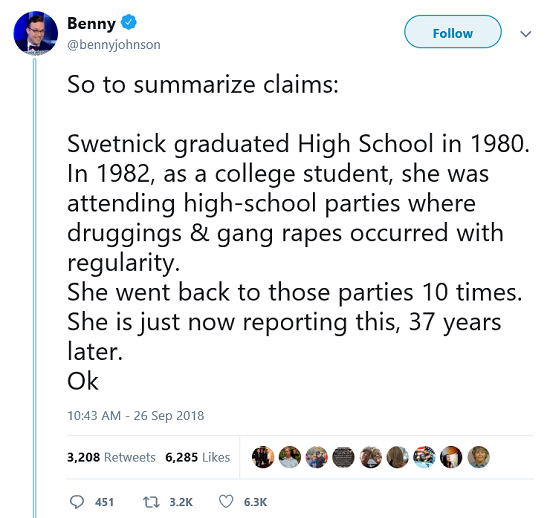 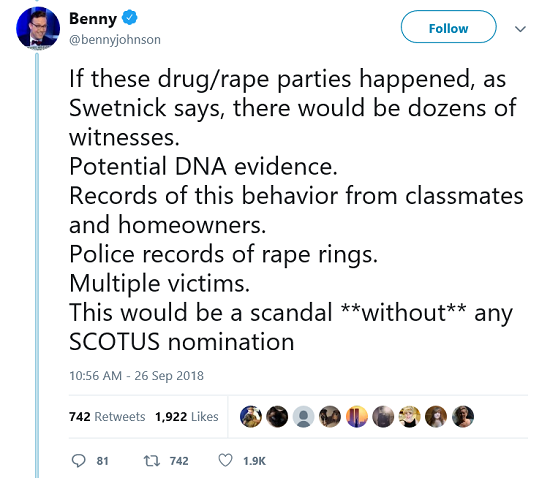 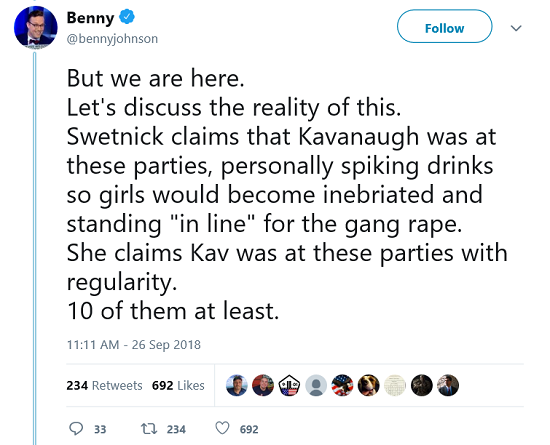 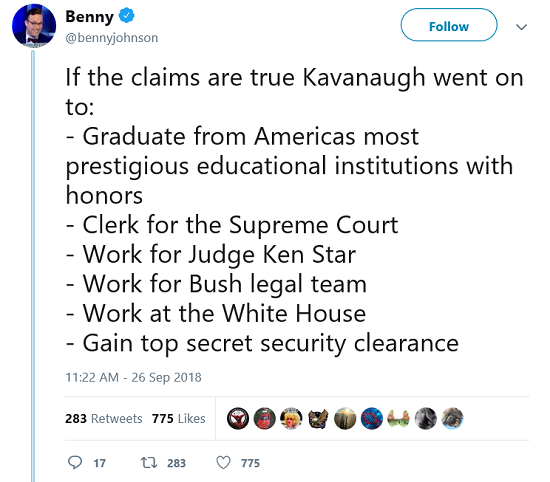 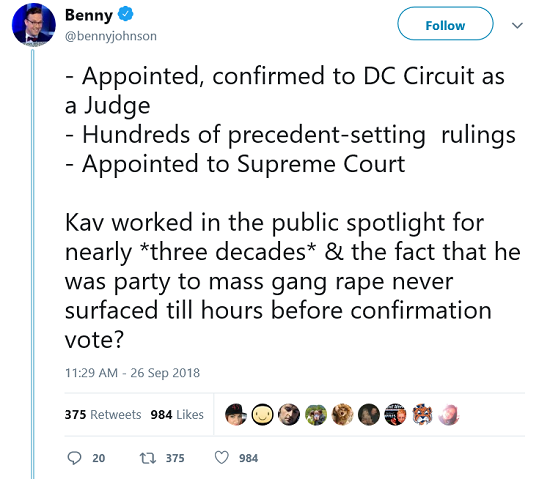 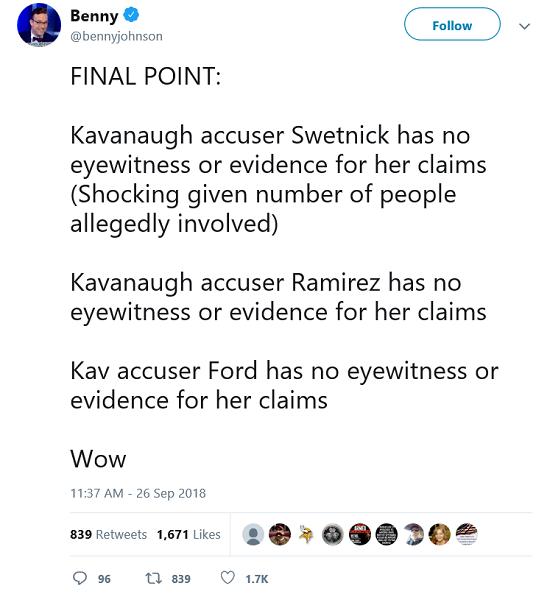 Swetnick's claims are, on the face of it, a tissue of lies.  It is impossible for any objective observer to take them seriously.  There is simply no way any human being in her right mind would have behaved as she did, going back to the scene of known gang rapes ten times - until she herself became one of the victims, according to her.  Really?  She actually expects us to believe that?  And all that time, she never went to the police over the obvious crimes being committed in front of her very eyes?

If it looks like bullshit, and walks like bullshit, and smells like bullshit, and sounds like bullshit, and tastes - well, never mind about the taste... - then, as far as I'm concerned, it is bullshit.  I have no hesitation in calling BS on Ms. Swetnick's allegations - and on the uncorroborated, unsupported, unverified (and unverifiable) allegations against Judge Kavanaugh by his other accusers.  They add up to a very clear smear campaign, a hit job.  If anyone dares to argue that they're credible, I'll immediately know that either that person is coldly, cynically lying, or that he or she needs mental health help, very badly indeed.

What's more, if any politician, of any party, dares to tell me that I have to take such drivel seriously, and believe (or accept as "credible") the person spouting it, that politician can kiss my fundamental jujube.  In public.  On Capitol Hill.

Sigh... This is Clarence Thomas all over again...

Steve,
To let you know so you aren't embarrassed if the question if ever comes
up ( pun intended ) on Jeopardy, women don't have a tally whacker.

They and their enablers are desperate, shameless liars.

I would not like to be Swetnick, ford, or the other one if any of them has an actual claim of sexual attack in the future. Also, there is not a man in the world who would now date any of them. I would not allow myself to be in the same room with one.

Who
What
When
Where
Why

Who? Everyone she's named has denied any involvement/knowledge.
What? Is it groping, or just being locked in the same room? Doesn't even consistently acknowledge how many people were there.
When? She doesn't know
Where? She doesn't know
Why? Likely character assassination. She didn't tell anyone for over 30 years? Not a family member, or even her best friend?

None of this sounds credible.

Who? Apparently dozens of people who've all kept their mouths shut for 35 years. Really? That sounds plausible?
What? Gang rapes and druggings at parties that she repeatedly attended.
When? for years?
Where? All over the place, apparently.
Why? likely character assassination. She needs to have any clearances she has pulled if they haven't been already. It appears she either lied during her background investigations (witnessing/participating in multiple felonies) or is lying now.

Swetnick has no credibility, given that she's put herself in a catch-22; she's either lying now, or she lied in her background investigations.

Why should anyone believe liars when they are known to lie? None of this sounds credible.

Twitter is definitely the wrong medium to publish so many things, but that's where the audience is!

A pedo defender is not going to be long term friend material.

These abusive lies and slander happen for two reasons.....first it works. It kept Robert Bork from being confirmed, it almost kept Clarence Thomas from being confirmed and it cost Judge Moore a Senate seat last fall( the DAY after that election his accuser DISAPPEARED and hasn't made a peep since then). So these tactics work....and to the dmonrats they essentially cost NOTHING. If the lies work they win. If they don't, oh well.....try again the next time but the lies COST THEM NOTHING. Till Kavanaugh et.al start suing for defamation of character and these liars start losing real $$$ in court for libel/slander they have no reason to not lie.

The activity described was never gang-rape. It was more likely she "did the football team" in order to be popular. That is why she kept going back, as well as any other females who routinely attended such parties. What was known, back then, as "she was the 'town pump' " sort of thing. Such a person would definitely have been a willing recipient of bodily fluids.