Today's award goes to an anonymous idiot in England.

A canal boat user accidentally drained [a] 200-year-old waterway - causing £3m [about US $3.9 million] worth of damage - after leaving locks open. Water ended up gushing down the Shropshire Union Canal, washing away the banks and leaving a huge gaping hole in the waterway. 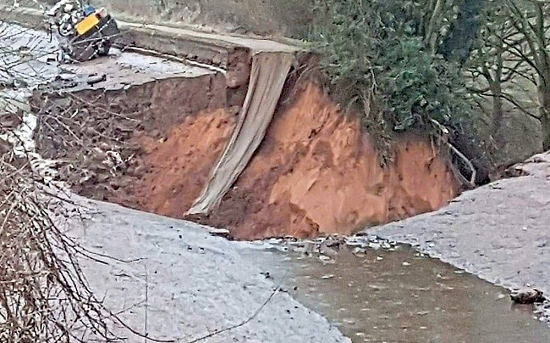 Trees along the canal were torn from their roots, hundreds of fish died and boats were lifted from their moorings.

The 'human error' by an unknown Shropshire Union Canal user - thought to be on a boat or barge - will cost £3 million to repair.

About 15 boats were stranded and more than 10,000 fish were rescued, but many more died when they were washed on to dry land.

I hate to see that.  English canals are very historic, dating back to before the Industrial Revolution (which could not have taken place without them).  Today, so-called "narrowboats" are a very popular form of recreation and leisure travel.  Here's another part of the Shropshire Union Canal, showing what it looks like when idiots don't mess up (image courtesy of Wikipedia). 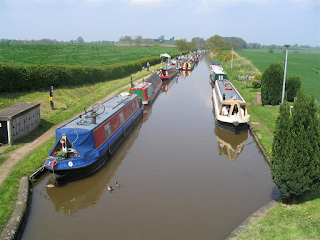 I'm sure this incident ruined their planned summer vacations for many people.  Hopefully, things will be back to normal by next cruising season.

Can't help but wonder if it was sabotage...

I guess it's because the canal is so old (and they assume users won't be idiots)...but I find it somewhat amazing that there's not any sort of safety lock, to prevent both ends of the lock from being opened at once.

The story was confusing to me because lock-gates would be extremely difficult to open unless the water is near to equal level.

What happened here is that someone left both gate-valves open, allowing water from a higher level of the canal to pass (at lowish volume) through the lock gradually overfilling the lower portion of the canal until the water overtopped the embankment. The overtopping, which would have started as a trickle, nevertheless eroded the bank such that more and more water flowed until it was a deluge that did all the damage described.

I was wondering.... thanks for the explanation.

For a cool piece of canal history, go to https://canalrivertrust.org.uk/anderton and look at the Anderson Boat Lift. Performs the same function as a set of locks but in much less space. The history of it is interesting, and it is still in use. Visited there a few years ago and was fascinated by the engineering. As you said, the Industrial Revolution would not have been possible without the locks and the water borne transport they enabled.

A little OT but related, those who are interested in the history of the Industrial Revolution and follow on achievements and who find themselves in Manchester, a center of said Revolution, should take time to visit the Science and Industry Museum there. Lots of historic steam engines that drove factory machinery, lots of historic locomotives, They also have what's left of "Baby", the world"s first programmable digital computer. https://www.scienceandindustrymuseum.org.uk/

Finally the Imperial War Museum North is not too far away - also worth the visit. It cover "modern" conflicts from WW I and later.