If you read between the lines, things become a lot clearer


The expression "to read between the lines" is an old one.  For the benefit of non-native English speakers who read this blog, there's a useful definition of the term here.  If one applies that approach to the latest letter from Prof. Ford's lawyer to the Senate Judicial Committee concerning her proposed testimony on Thursday (quoted in part here, and reproduced in part below - clickit to biggit), a lot of things become clearer. 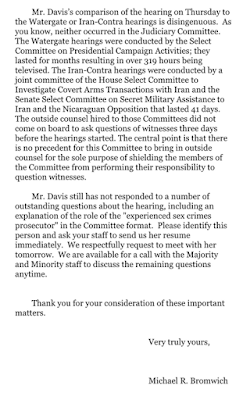 See if you agree with my perception of what is said, versus what is meant or implied by it.  Original text is in bold print;  my understanding of it is in italics below each excerpt.

"The outside counsel hired to those Committees did not come on board to ask questions of witnesses three days before the hearings started."

Translation:  "Those hearings offered weeks and months in which partisan political attacks on policies and individuals could be conducted - not to mention broadcast on live television, to sway public opinion.  This Judicial Committee hearing offers only a matter of hours, perhaps a day or two.  We want our partisan political attacks against Judge Kavanaugh to have the greatest possible effect during that time.  An outside counsel might prevent us from doing that."

"The central point is that there is no precedent for this Committee to bring in outside counsel for the sole purpose of shielding the members of this Committee from performing their responsibility to question witnesses."

Translation:  "We want to put Republican Senators in the spotlight, so that anything and everything they say can be twisted, misquoted and misrepresented for partisan political purposes.  We want to portray them as villains, who won't believe an accuser because she's a woman and they are men. The use of outside counsel to ask the questions will make it more difficult for us to do that."

"Mr. Davis still has not responded to a number of outstanding questions about the hearing..."

Translation:  "We're trying to set up this hearing in a way that offers the maximum advantage for Prof. Ford and her supporters.  Unless and until you allow us to stage this in a way that offers maximum benefit to our side, and minimal benefit - if not actual damage - to yours, we'll continue to quibble, equivocate, nit-pick and split hairs.  We're going to draw out proceedings, cause the maximum possible delay, and portray you as the obstacle rather than ourselves.  We may even call the whole thing off, and blame you for causing that by your intransigence, unless you agree to do this our way."


How about it, readers?  Do those seem like reasonable, feasible, likely interpretations to you?  They sure do to me.

In particular, note that while the letter refers to "outside counsel", the Committee described the questioner as "an experienced sex crimes prosecutor".  That's probably what triggered this protest.  A lawyer is just a lawyer.  A prosecutor who has experience in the field of sex crimes understands the specific issues, pitfalls and complications of that field, particularly emotions versus facts.  He or she knows what questions to ask to arrive at the truth, how to ask them, and how to assess the character, truthfulness and integrity of a witness.  He or she understands the rules of evidence, and what is and is not evidence (or hearsay, or speculation, or unfounded slander and libel).  He or she will have seen it all before, many times over - just the kind of person a partisan political attacker would not want to question his/her/their witness.  Hence the lawyer's assertion, elsewhere in the letter, that "This is not a criminal trial for which the involvement of an experienced sex crimes prosecutor would be appropriate."

If the prosecutor turns out to have a track record of effectiveness and success in his/her field, I expect counsel for Prof. Ford to object vehemently to his/her appointment, and demand that someone else be selected to do the job - preferably someone likely to be more amenable to the accuser's subjective perspective, rather than committed to justice as an impartial, objective standard.  (I hope that the prosecutor already selected by the Committee will display the latter attributes;  but, since politicians are involved, that can't be taken for granted.  I suppose we'll have to wait and see.)

Note, too, the lawyer's assertion that "The hearing plan that Mr. Davis described does not appear designed to provide Dr. Blasey Ford with fair and respectful treatment."  I'm sure you can read between those lines for yourself.  My translation:  "You won't let us define what is fair and respectful!  That's not fair!  You're refusing to allow us to conduct this hearing on our terms!  Who do you think you are, you racist, sexist, misogynist old men?  Waaaaahhh!  #MeToo!"

Finally, please note that I have no partisan political ax to grind in this matter.  I'm neither Democrat nor Republican, and - as I've noted many times in the past - I distrust both major political parties equally.  However, regardless of political persuasion, I can recognize a hit job when I see one.  I've read Alinsky.  I can see when, and recognize how, his tactics are being applied.

I think the real victims in all this are Judge Kavanaugh and his family, who are being dragged through the (im)moral mire and personally attacked for partisan political purposes.  They deserve better - much better - than that, whether or not the Judge is ultimately confirmed to SCOTUS.  I think we, the American people, owe them a sincere, heartfelt apology for the way they've been treated.  We also need to elect politicians who will extend to their fellow citizens greater respect and fairness than the Kavanaughs have received on Capitol Hill.

EDITED TO ADD:  Have you seen the latest Kavanaugh accuser? 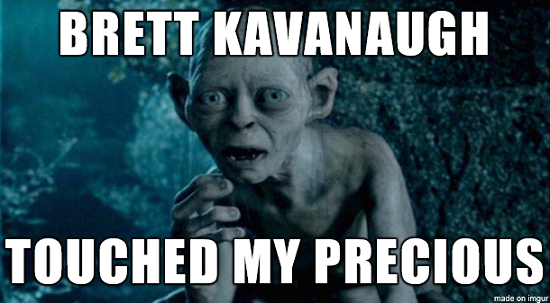 "Great stuff" is an UNDERstatement!

I have my moments.
As you know, when the muse strikes, you have to dance.