The current economic "boom" is deceptive. It's still all about debt.


I'm very grateful to the economic policies of the present Administration for improving the outlook for so many Americans.  There are millions more jobs available, some of the worst excesses of the previous Administration have been halted or reversed, and a lot of us have more hope for the future.

Unfortunately, the improvements so far haven't begun to touch the real problem, one that dates back to the 1950's and 1960's.  America began to live by debt in those years, and never stopped.  As more and more debt was needed to fund greater and greater government expenditure, so the ratio of income to expenditure, and income to debt, continued to get worse.

This is how the situation has progressed from the 1960's to today.

We would like to introduce you to Sam and his finances. Currently, Sam does well for himself, earning $100,000 a year. Sam loves the good life, and to maintain it he consistently spends more than he earns. To fund this continual budget shortfall, he borrows money. The graph below shows his rising income (green) and accumulating debts (red) since 1966.  [Click the image for a larger view.] 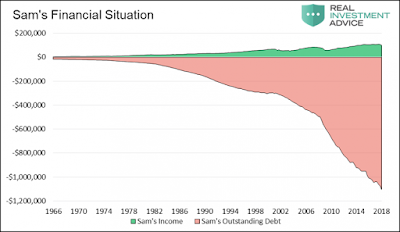 To further emphasize the growing divergence between tax revenue and debt outstanding, consider that debt grew by 6.26% and revenue shrank by 6.03% over the last year. While the recent decline in revenue is largely a function of the new tax legislation and may not last, the long-term trends are not encouraging. Over the last five and ten years, tax revenue increased annually by 2.22% and 2.09% respectively, while debt outstanding increased by 4.69% and 8.37% annually.

If the graph above were truly the financial situation of a guy named Sam, we would confidently tell you he went bankrupt 20 years ago.

The Congressional Budget Office (CBO) expects government debt outstanding to rise by over $1 trillion per year for each of the next four years. At the same time, neither we nor the CBO expect to see interest rates decline meaningfully. However, and of grave concern, the possibility of higher rates is real. Given the outlook for rising debt and flat to rising interest rates, interest expense will continue to make Uncle Sam’s financial problems even more daunting.

Judging by historically low-interest rates, investors, ourselves included, are not concerned that the U.S. government will default. Given the government has a printing press, we see little reason for such a concern.

That said, we are greatly worried that the growing imbalance between debt outstanding and the means to pay it off will encourage further reckless monetary policy.

It's bad enough looking at the federal government's debt situation, as shown above.  When you look at almost all of the 50 states that make up this country, their situation is proportionately just as bad, if not much worse in some cases.  To take just one recent example, Illinois' unfunded pension liabilities alone (which we've discussed before in these pages) amounted to over 600% of state income in 2017.  That's over and above all other liabilities, debts and financial commitments.

If we ran our household accounts the way our federal and state governments run theirs, we'd all have been bankrupt long ago.  Tragically, many of us have followed their example.  Consider this:

Household debt-to-income ratios ... compares monthly debt obligations to monthly gross income to determine capacity for taking on new debt. Mortgage or rent is usually the largest debt obligation people have, and this is central to the debt component of the ratio calculation. Also included in the debt amount are monthly car loan payments, monthly credit card minimum payments and any other regular loan payment obligations ... Typically, a debt-to-income ratio 36 percent or below is considered financially healthy ... ratios of 37 to 42 percent are not bad, 43 to 49 percent require some intentional repairs, and 50 percent or above likely require aggressive professional debt repair help.


And now consider this:

The average U.S. household ... owed $204,992 in mortgages, credit cards, and student loans in mid-2015 on a median household income of $55,192 ... Indebted U.S. households carry an average credit card balance of $15,706 ... Combine this with stagnant wages for most Americans and the point is that ... average Americans are living pretty close to the edge.


Those mid-2015 numbers have only gotten worse for most people since then.  They translate to a frightening debt-to-income ratio for many people.  I know several individuals and families who are borrowing from one credit card to pay another, every single month, and are more in debt at the end of every month than they were the month before.  They're sinking, and there's no financial lifeboat coming to rescue them.

The huge overhang of debt in our society has not been resolved by recent economic progress.  In fact, the most recent federal budget is adding a trillion dollars of debt to our national burden in a single year.  Nor do I blame the Republican party for that - it was just as bad, if not worse, under Democratic party government.  Both sides of the aisle are guilty of spending money we don't have, in order to bribe voters to support them.  We, as a nation, have become so addicted to debt that if we were no longer permitted to use it, our entire economy would collapse overnight.  A huge proportion of our everyday economic activities, as individuals, companies, cities, states and nations, is predicated on being able to borrow money we don't have to spend on what we need.  Take away the ability to borrow, and we'd lose the ability to spend - and every business and administration depending on us to give them money would collapse.

I've written many times about the problem, and the threat posed by, debt in our society.  Last year I warned that "Debt is killing us".  Those warnings remain true, because we're getting more and more in debt by the day.  Unless we, as individuals and as a nation, break that habit, the day must inevitably come when we're called upon to repay our debt . . . and it's already too big to repay.  It simply can't be done.  There isn't that much money in existence, much less hard assets that can be sold to pay it off.  The rest of the world is in the same boat.  The only way to pay off such levels of debt is to "print money", create it out of nothing and nowhere as binary ones and zeros in a computer system.  If we do that, the inflationary impact will be catastrophic.  (Want a recent example?  See Venezuela.)

Sooner or later, the economic pigeons have to come home to roost.  It behooves all of us to put our own financial houses in the best possible order, so that when they do, we can be positioned as well as possible to ride out the storm.  That doesn't mean we won't be buffeted and battered by the weather, but we may at least be able to get through it together.

See this site for revenue:
https://www.thebalance.com/current-u-s-federal-government-tax-revenue-3305762

Individual income tax, corporate income tax, plus payroll taxes are some 92% of this Fed taxes collected.

The article cited is a bit misleading:
"To further emphasize the growing divergence between tax revenue and debt outstanding, consider that debt grew by 6.26% and revenue shrank by 6.03% over the last year."

Revenue did not shrink. It doesn't help to convince people to repeat partial truths (maybe some limited definition of revenue did shrink).


Debt is a problem, tho nobody knows how or when it will become urgent. Certainly the Democrats, who want even more spending, do not act like it is a problem. For 30 years, every time the Reps try to "be responsible" and reduce spending, the Dems claim that "Reps are mean and are against all the goodies the good gov't can do with more spending". So then Reps lose the next election and the Dems increase spending AND increase taxes, and waste, and inefficiency, and corruption, and increase the deficit and total debt.

How about trying to have bigger deficits with lower taxes, allowing more economic growth, and keeping publicity about the Dem promise to increase taxes and reduce growth?


How bad can it get? Japan has a national debt of about 200% of its annual GDP -- mostly owed to itself. The USA can probably get to that huge, excessive level, without worse problems than the Japanese. Tho the '90s are called "Japan's lost decade", which continued into the 00s, and are still continuing in the new teens. Very low growth. Super huge gov't debt, owed mostly to Japanese investors.

But not a Venezuela price-controlled socialist nightmare.

It's good to talk about this excess gov't spending problem. It won't be solved until Dems are against new spending (not merely against new Defense spending).

I was very pessimistic before the election, I just saw doom no matter whom was elected. I thought Trump was the least worst, but WOW on what has happened. I’m now optimistic.

Growth and cutting spending are the only ways out. Unfortunately there is not enough political pressure yet for cost cutting to happen. But, the forces that killed the tea party - the uniparty, msm, big tech, deep state are all in fights with Trump...

And with rising interest rates, some bubbles may pop.

I saw the word "Uniparty" the other day & thought that was a great name for what we have!
The republicans come to power & lower the taxes for the wealthy & corporations then increase spending. When the democrats come to power they leave the tax cuts & spending alone and spread out what they give to the poor a little bit & raise a taxes a touch. Then the republicans get back in power & the cycle repeats.

This all adds up to bigger debt but the debt puts lot's of dollars in lots of pockets.

It's the modern America...

When the United States is broke, unable to pay its debts, and no one wants dollars, isn't the whole world broke? The world doesn't do business in British pounds or Italian lira, does it? And certainly not in Venezuelan bolivars.

Greece is broke, but it has an underground economy. The same thing happens here now, and will be the operating economy when the US dollar has no value.

As for debt, no organization will care. Look at the last mortgage fiasco. Banks were left with stockpiles of unsaleable houses. In a total collapse, financial institutions won't bother collecting debt. They won't be able to resell.

None of that means society will be warm and friendly.

Thankfully I have a wife who doesnt believe in debt. We pay off our credit cards every month, have no mortgage or car payment, we do owe several thousand on a travel trailer we bought this year. I know I woulnt be good without my wifes example.

What does a debt-free economy look like? Is there a country in the world that doesn't run on debt?

Here's a list of countries with low debt:
https://www.therichest.com/rich-list/rich-countries/top-10-countries-with-the-lowest-levels-of-public-debt/

Estonia seems to be the one which can be most followed, growth with little gov't debt, and few natural resources to be sold.

Estonia is also among the leaders in e-gov't, and I expect in the near future will have even more automation of gov't.

The USA should try to copy Estonia, and especially what we think are the good points.