Looks like I can tell you about this book now


I have been, and am, involved in a number of writing projects that can't be discussed until they're formally announced.  The first of these was Mike Williamson's short story collection "Forged in Blood", which has turned out to be enormously successful and very popular.  I'm proud and honored to have been one of the authors Mike invited to contribute to it.

Another project has been a short story collection by Tom Kratman, titled "Terra Nova".  It's set in his "Carreraverse" on the fictional planet of Terra Nova (there are currently six books in the series, with a seventh novel to be published shortly). I was very pleased to be invited to contribute to this project, too.  At the Baen Roadshow presentation at DragonCon in Atlanta this weekend (which discusses current and forthcoming releases), the cover for his short story anthology was shown.  Since it was a public mention of the book and its contributors, I guess I can share it with you now.

This image, sent online, was obviously taken with a cellphone camera at the presentation.  It isn't very clear, but it's still readable. 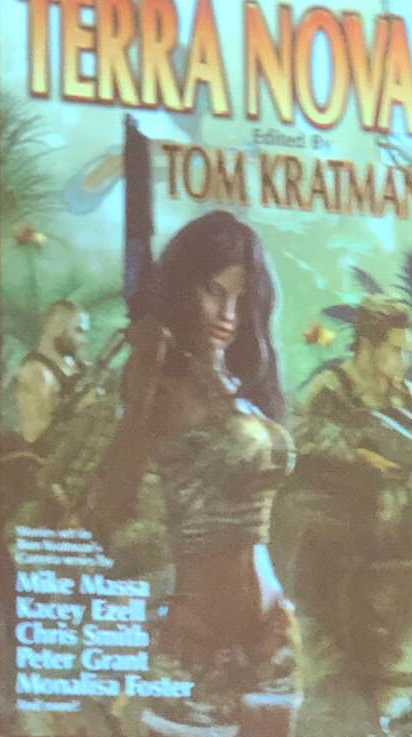 My thanks to Tom Kratman for inviting me to be part of this project.  It was a lot of fun.  I hope it'll be as popular and successful as Mike Williamson's anthology.

I don't know when this book will be released - probably next year, at a guess.  Anyway, the secret is out now, so you can look forward to it.

Labels: Books, Cool, Me me me, Warm Fuzzy Happy Stuff, Writing
Email ThisBlogThis!Share to TwitterShare to FacebookShare to Pinterest

The collection got a nice reception at the Baen Roadshow panel yesterday I was in the audience for the item).

And, from my understanding, it should be out summer of 2019.

Good choice by Kratman to pick you!! Congrats,