I'm sure most of my readers have read (or at least know of) Ayn Rand's classic Objectivist novel "Atlas Shrugged". 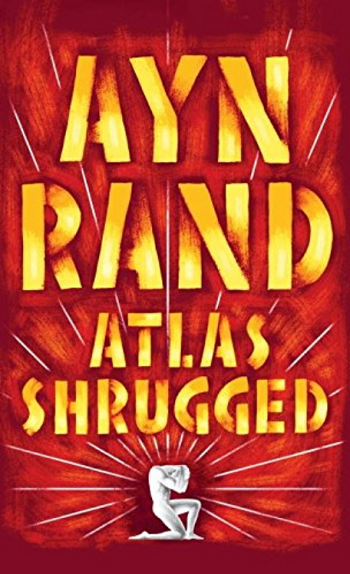 Wikipedia sums up part of the book's world view as follows:

In the world of Atlas Shrugged, society stagnates when independent productive agencies are socially demonized for their accomplishments. This is in agreement with an excerpt from a 1964 interview with Playboy magazine, in which Rand states: "What we have today is not a capitalist society, but a mixed economy—that is, a mixture of freedom and controls, which, by the presently dominant trend, is moving toward dictatorship. The action in Atlas Shrugged takes place at a time when society has reached the stage of dictatorship. When and if this happens, that will be the time to go on strike, but not until then".

Rand also depicts public choice theory, such that the language of altruism is used to pass legislation nominally in the public interest (e.g., the "Anti-Dog-Eat-Dog Rule", and "The Equalization of Opportunity Bill"), but more to the short-term benefit of special interests and government agencies.

Rand's heroes continually oppose "parasites", "looters", and "moochers" who demand the benefits of the heroes' labor. Edward Younkins describes Atlas Shrugged as "an apocalyptic vision of the last stages of conflict between two classes of humanity—the looters and the non-looters. The looters are proponents of high taxation, big labor, government ownership, government spending, government planning, regulation, and redistribution".

"Looters" are Rand's depiction of bureaucrats and government officials, who confiscate others' earnings by the implicit threat of force ("at the point of a gun"). Some officials execute government policy, such as those who confiscate one state's seed grain to feed the starving citizens of another; others exploit those policies, such as the railroad regulator who illegally sells the railroad's supplies for his own profit. Both use force to take property from the people who produced or earned it.

"Moochers" are Rand's depiction of those unable to produce value themselves, who demand others' earnings on behalf of the needy, but resent the talented upon whom they depend, and appeal to "moral right" while enabling the "lawful" seizure by governments.

Senator Elizabeth Warren of Massachusetts has one-upped socialists Bernie Sanders and Alexandria Ocasio-Cortez: She proposes to nationalize every major business in the United States of America. If successful, it would constitute the largest seizure of private property in human history.

Warren’s proposal is dishonestly called the “Accountable Capitalism Act.” Accountable to whom? you might ask. That’s a reasonable question. The answer is — as it always is — accountable to politicians, who desire to put the assets and productivity of private businesses under political discipline for their own selfish ends. It is remarkable that people who are most keenly attuned to the self-interest of CEOs and shareholders and the ways in which that self-interest influences their decisions apparently believe that members of the House, senators, presidents, regulators, Cabinet secretaries, and agency chiefs somehow are liberated from self-interest when they take office through some kind of miracle of transcendence.

Under Senator Warren’s proposal, no business with more than $1 billion in revenue would be permitted to legally operate without permission from the federal government. The federal government would then dictate to these businesses the composition of their boards, the details of internal corporate governance, compensation practices, personnel policies, and much more. Naturally, their political activities would be restricted, too. Senator Warren’s proposal entails the wholesale expropriation of private enterprise in the United States, and nothing less.

If the latter proposal reminds you of Ayn Rand's novel, don't be surprised.  I can't help but wonder whether Senator Warren considers "Atlas Shrugged" to be a blueprint for the sort of American society that gives her warm fuzzy dreams at night.  Leave it all to the State!  The State knows what's best for you (provided the right people are running it, of course)!  Resist the State at your peril!

It's no wonder that statists are so consumed with anger, hatred and bitterness over the election of President Trump.  Irrespective of his admitted personal flaws, he remains the antithesis of their political wet dreams.  For that, all who believe in the paramountcy of the individual over the Nanny State should be truly grateful.  They should also note what the statists have in mind if they can defeat President Trump and/or his congressional supporters in any or all future elections . . . and plan accordingly.

Some small business should offer to let Senator Warren run the place for a year. The ones that will be affected by Warren's law should guarantee that company's existence after Warren.

Every aspect of Warren's performance should be made public; public service ads should run constantly.

From then on, every time Warren speaks on any subject, her performance in that business should be advertised again.

My hope would be she would get tired of being laughed at and disappear from public life. Alas, I know people like her cannot be embarrassed or shamed.

Bear in mind that Warren is senator from Massachusetts, which politically is about where Venezuela was in Chavez' early days. This is where The World's Best Driver (Ted Kennedy) and Lurch (John Kerry) are viewed as statesmen and moderates.

I went to the less fashionable university down the street, but bounced at a Harvard-Square bar for a while when lobstering season was slow in winter. Warren and her ilk are NOT exceptional in the Massachusetts political system. Nepotism and cronyism are and always have been how government works there. As a result, Warren was always going to be a senator once she got a part-time gig at Harvard that pays her a half-mil a year to not teach any classes. This is a place where the head of the Irish mob (who had a fetish for killing hookers and italians) had a brother who was the president of the MA senate (and also was director of the state's university system) who kept the FBI off his back, but never got in any sort of trouble for it.

No, Massachusetts is Venezuela but with awful weather and hairy-legged feminists instead of howler monkeys.

Just about any corporation worth a billion or more has international components.
Faced with losing control of the company what CEO would not instead move the corporate headquarters outside the US?
And they could write off their US holdings as a loss and leave owing no taxes for that year.
Won't get nearly that far. With that sort of money at stake Ms Warren would almost certainly suffer an unfortunate accident, perhaps while crossing a narrow two lane bridge in Massachusetts.

If she were to pass such an act, I would consider it a moral imperative to kill her and anyone else who voted for it, without warning or exception, unto my last breath, and with my bare hands if necessary.

Then their families, their animals and livestock, followed by burning their homes, salting their fields, and dumping their corpses in their wells.

I'm just spitballing, but I'm pretty sure there would be a line, and a prodigious wait to sign-up for that, measured in city blocks.

"...no business with more than $1 billion in revenue would be permitted to legally operate without permission from the federal government. The federal government would then dictate to these businesses the composition of their boards, the details of internal corporate governance, compensation practices, personnel policies, and much more."

The Europeans had a word for this sort of economic organization. This is a textbook definition of Fascism. Maybe she thinks that Fascism, like Communism, only failed because the wrong people were in charge. Every time it has been tried. Every where. Without fail.

Sometimes I wish these Totalitarian wannabes would come up with a new bad idea instead of just re-branding the bad ideas of earlier police states.

I think everyone but especially politicians need to read Skin in the game followed by Anti fragile both books by Nissam Nicholas Taleb.

My view is that politicians should be disallowed to legislate unless they too suffer the consequences of their policies. The pain will moderate their insufferable meddling.

I have to hope for Lizzy that this is a spoof. Because if it is true, then she just lost her bid for President. At least I hope that the people of this country are still smart enough that they are not going to go for something like this.
But the more I think of it, the more I realize that nothing is beyond the lunacy of America. I mean, they almost elected Hillary, and she was even worse than Lizzy.

you merely have to look at the political "thinking" emanating from CA/Sacramento politicians to realize just how stupid and out of touch with reality the Left actually is in this country at this point. Certifiable idiots. Lizzy would disappear in the crowd in Sacramento.

" . . . and hairy-legged feminists instead of howler monkeys. "

Paul, how can you tell the difference?

"The View" supports the difficulty with seeing a difference.

Uchuck, you are absolutely right. IIRC, in the Soviet form of communism, the government both owned and operated industry, while in the German form of fascism, industry was privately owned, by was made to submit to government's every demand. I believe that makes her a Nazi. This quote from Adolf Hitler further supports her as being a Nazi:

"We are socialists, we are enemies of today's capitalistic economic system for the exploitation of the economically weak, with its unfair salaries, with its unseemly evaluation of a human being according to wealth and property instead of responsibility and performance, and we are determined to destroy this system under all conditions."
Adolf Hitler, May 1, 1927