Bicycles as you've never seen them before


It seems Chinese cities are clogged with hundreds of thousands of bikes-for-rent that no-one wants to rent, and which have therefore been abandoned.  Yahoo has a photo essay about them that's fascinating.  Up close, they're just junked bicycles . . . 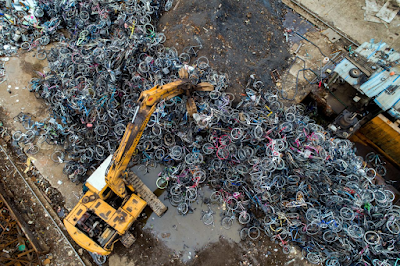 . . . but when photographed from afar, after being sorted into like colors, etc., they look just like fields of weird flowers. 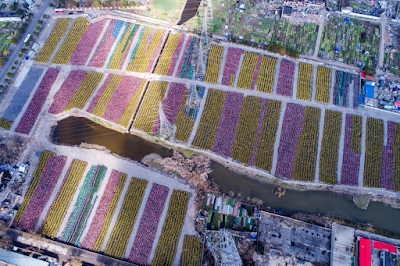 Click either image for a larger version.  There are many more photographs at the original article.  Open each in a new tab or window for a bigger view.

French-born photographer Mathias Guillin, 49, lives and works in Shanghai — where he took these stunning pictures with his drone.

His hypnotic photographs show thousands of bikes that have been abandoned in such a way as to make them look like massive tulip fields.

Shared bikes have flooded the Chinese streets, with over 1.5 million bikes in Shanghai alone.

Dubbed the Uber for bikes, Bluegogo has had to backpedal after going bankrupt late last year, leaving up to 700,000 bikes locked and unusable.


There's more at the link.  Recommended reading and viewing.

(In the light of those photographs, one wonders how many of the rental bikes currently flooding US cities will end up the same way . . .  One also wonders how much money was invested in the bikes that are now being junked.  If I were an investor, I wouldn't be terribly happy about that!)

The same thing is already occurring here, SFO for one...

Washington DC is evaluating them. The newest craze is powered scooters. I've already witnessed one clueless twit ride out in front of cars because they couldn't find the brake.

The electric scooters are a plague in Santa Monica to the point the City Council has ejected two players. The riders ignore the rules of the road (on sidewalks at 10+ mph) and rarely have a helmet..

Plus, the cast-offs are dumped willy-nilly without regard to pedestrian needs..

Just had DFW's first fatality on a rental scooter. Newscast had no clue on what happened, he called his friend to say he was in a crash, died at the hospital.

Why do I suspect that there'll be a wasted municipal subsidy for these soon to be junked bikes meaning that we all won't be terribly happy about it?

All the rare earths being wasted.

This reminds me of Japan, too. I never saw any of the dumps there, but abandoned bicycles were all over the place.

We have one of these ChiCom-owned bike rental companies on the university campus (largest in TX) where I work. They're yellow, the company is called Ofo. They have, I think, 3,000 (maybe as many as 5,000) bikes on campus.

During the first month of the school year, they're unlocked, anyone can use them for free. Students are riding them all over the place. Based on what happened when they were introduced, on a much smaller scale (only several hundred) last year, once they start requiring people to pay to use them, ridership will drop substantially, and the bikes will be simply left all over the place.