I'm always amazed - and delighted - whenever I find fresh evidence that the age of adventure has not yet ceased. 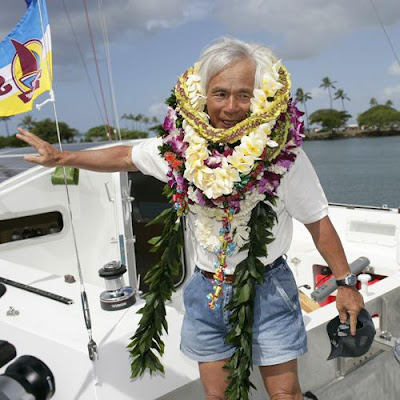 This remarkable man has already amassed quite a track record. He's circumnavigated the world twice, crossed the Pacific several times, and used some unique vessels in the process - a solar-powered boat of conventional construction, another made from recycled beer cans, a catamaran named Malt's Mermaid II constructed from 528 aluminum beer kegs ("500 of them were empty," he joked), and another made of whiskey barrels and aluminum cans with sails made from plastic soda bottles. (You might infer that he's a believer in recycling!) 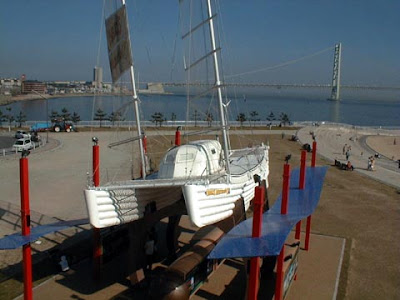 At 68 years old you might think he'd be planning his retirement. Far from it! He set off last Sunday on his latest adventure. He plans to sail from Hawaii to Japan in a boat named Suntory Mermaid II that's powered only by the motion of the water. A flat "wing" at the bow will be moved up and down by the flow of the waves, driving two "flippers" whose kicking action will pull the craft forward. The New York Times has a detailed report with a graphic illustrating how this will work (click to enlarge): 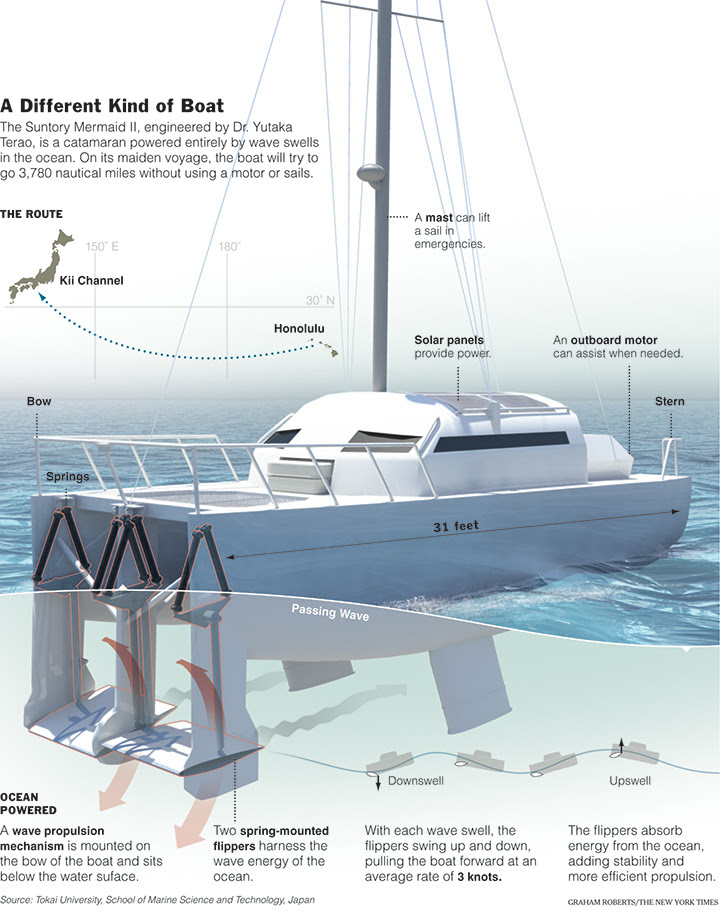 This video of a small test craft in a water tank gives you some idea of how it works.

At an expected average cruising speed of about 3 mph (about the same as a brisk walk) he expects to reach Japan in late May after covering approximately 4,000 miles. There are sails and a small outboard motor in case of problems with the wave-drive system, and solar panels will recharge batteries and allow him to use a microwave oven for cooking. He's taken plenty of books along, and expects to have a fairly relaxed trip. 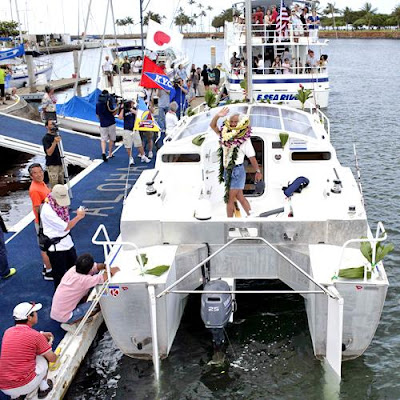 If you'd like to follow his adventures, he'll be updating an expedition Web page as often as possible, including a diary, map of his progress and other information. 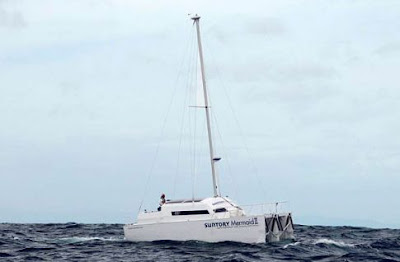 Godspeed and fair sailing to you, Sir! Thanks for showing us that adventure is still there for the asking, if you think "outside the box" and you've got the guts to try.

I hope he has smooth sailing and fair weather for his trip. What a fascinating character.

Slightly off topic, but I must say I rather enjoy reading your blog, never a dull post. It has become a daily read for me. Keep up the good work.

Way to go old-dude! I keep thinking that the wave propulsion mechanism might be also useful as a pumping mechanism to de-salinate and provide fresh water during the voyage.