Sled dogs around the world


As I'm sure you know, the annual Iditarod sled dog race is currently under way in Alaska. I've been following developments at its Web site and from video clips on YouTube, and it looks like a tough, gruelling year (not that they aren't all like that!).

At the same time, on the other side of the world, Sweden is hosting the World Sled Dog Championship in the tiny town of Asarna. It's rather confusing: a whole bunch of countries, cities and localities host what each claims to be the "World" sled dog championship, and there doesn't seem to be any official ruling on which is the "top dog", so to speak. I'd have to say that the Iditarod is probably the race to produce the champions. Nothing else comes close in terms of the sheer grit, stamina, courage and endurance demanded of both team and driver.

There's an interesting twist to the Swedish championships this year: a South African team has entered. When I read this, I did a double-take. I spent the first thirty-seven years of my life in South Africa. There's some winter snow on top of the taller mountains, sure: but they're precipitous, inaccessible and essentially unnavigable. Snow elsewhere, there ain't - so how on earth did South Africans get into sled dog racing?

I found the answer at Sled Dog Central. Apparently South Africans have been racing sled dogs for some years now, using wheeled "sleds" (perhaps better described as "contraptions") instead of the real thing. 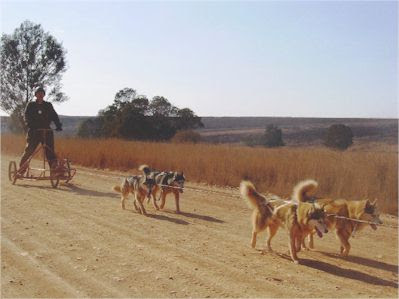 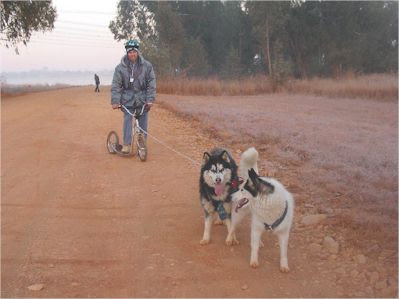 It's claimed that the sled dogs can handle the heat of Africa just fine - their double coats insulate them against both heat and cold. Having experienced African heat the hard way, this is difficult for me to believe, but I'll take their word for it.

Apparently the South African competitors in Sweden couldn't bring their own sled dogs due to a six-month quarantine restriction: so they borrowed dogs from local racers and came over a month early to get used to their new doggy friends.

"There's been a lot of falling. We've spent a lot more time in the snow than on the sled, but I think we've got the hang of it now," says Cindy Foggitt, 30, who has been South Africa's sled dog racing champion for the past three years.

"The good thing is that falling on snow is like falling on the clouds compared to falling on dry land. That hurts a lot more."

I bet it does! Full marks for effort and initiative to the South African team.

I guess the South African sled dog team is not quite so surprising in light of the Jamaicans fielding an Olympic bobsled team, even since 1988.