According to the Daily Mail, Selfridges in London has come up with a monster Easter egg for chocolate lovers.

The monster egg weighs 70 pounds and contains 168,540 calories - the recommended dietary intake (for all foods, not just chocolate) for 84 days. The egg takes four days to make and costs the equivalent of $1,000 - and they've already taken orders for four!

However, this isn't the largest edible Easter egg ever made. That honor is claimed by the Belgian town of St. Niklaas, where chocolate producer Guylian produced this monster in 2005. 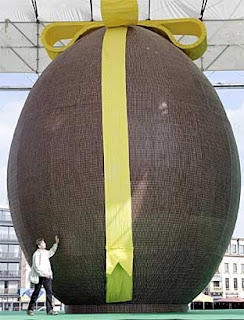 It took 525 hours of work and the equivalent of 50,000 bars of chocolate to produce it. The beast weighed in at almost 4,300 pounds and stood 27 feet high - but sadly, it wasn't destined to be eaten, only for outdoor display. As a local alderman commented, "After a week outside in all weather conditions, I don't think it would be very tasteful."

The largest Easter egg ever made (albeit inedible) is claimed to be the Pysanka, or Ukrainian easter egg, in Vegreville, Alberta, Canada.

This monster took 12,000 man-hours to construct. It was erected in 1974 to commemorate the 100th anniversary of the founding of the Royal Canadian Mounted Police. It's built to withstand the 100mph winds that blow across Canada's prairies from time to time. So far, so good.

So much for Easter eggs - but what about the Easter egg hunt? It's claimed that the largest Easter egg hunt ever held took place at Stone Mountain, Georgia, USA in 2006. A total of 301,000 eggs were hidden for children to find. The number of participants is unknown, but as the photograph below shows, there were plenty of them! 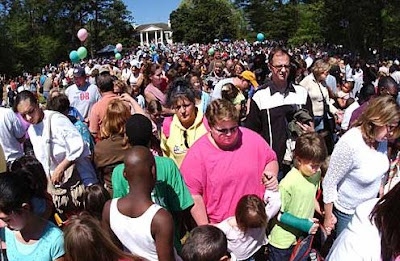 And it looks like a good time was had by all. 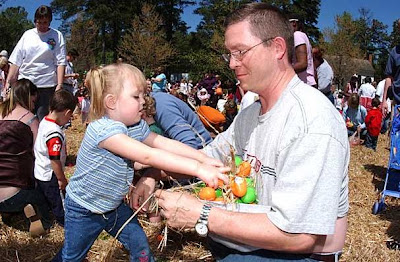 Sadly, I'm unlikely to end up with one of those Selfridges eggs this easter . . .

I had a great-uncle that owned a candy store, where most of the candy was made in the store. He would often get a 25-50 pound chocolate bunny for easter to display in his window. It only cost him a few dollars more than his usual chocolate, and if it didn't sell, he'd just melt it into normal candy.