Proof that caring is a universal factor


I was enthralled to read about the rescue of two stranded whales in New Zealand by a well-known dolphin, whom locals have named Moko. 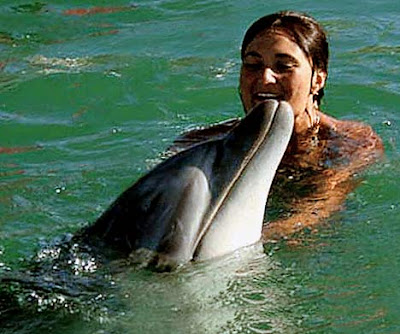 Time was running out for the mother whale and her calf as they lay beached on a sandbank.

Wildlife volunteers had tried four times to drag them into deeper water but four times they came back.

In such circumstances stricken whales are often humanely killed to end further suffering.

But then up bobbed Moko the dolphin - a playful creature familiar to bathers off the east coast of New Zealand's North Island.

In an astonishing display of communication between species, she and the whales were heard to call to one another before she led the 12ft pygmy sperm whale and her 4ft male calf out to open sea.

Mark Simmonds, director of science at the Whale and Dolphin Conservation Society, said that bottle-nosed dolphins are renowned for their ability to empathise with humans and other animals. “The whole notion that a bottle-nose dolphin would have shown the whales the way out is completely possible,” he said.

“Dolphins have got the ability to plan, to think ahead, to persuade others to take part. They almost certainly do not have a common language with pygmy sperm whales, but they would understand that the whales would have been at risk of stranding. The first thing a dolphin does when it has a calf is to push it to the surface so it can breathe.”

Moko has become famous for her antics at Mahia, which include playing in the surf with swimmers, approaching boats to be patted and pushing kayaks through the water with her snout. Once she had assisted the whales she immediately returned to the beach to play with local residents.

Such close interaction with humans is rare among dolphins but not unknown. Mr Smith said: “She’s become isolated from her pod obviously for one reason or another, but made Mahia home just at the moment.”

I was intrigued by these reports, and did an Internet search for more information. To my delight there's a clip on YouTube of Moko swimming with humans off Mahia beach. I apologize for the irritating music in the second half of the clip (why people have to add music when it's completely unnecessary I just don't know), but it's well worth watching.