Geek alert #2: Not an insect from a neighboring galaxy


The Lockheed F-35 Joint Strike Fighter program has produced many advanced technologies . . . but I think none are stranger-looking than this. 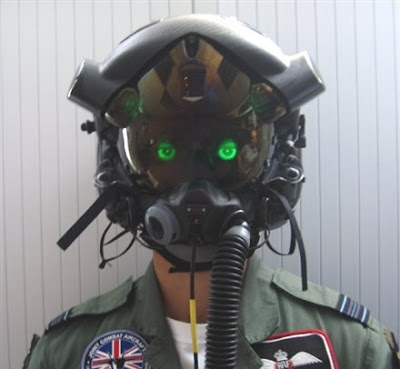 It's the so-called Helmet Mounted Display System (HMDS) being developed for F-35 pilots. The developers claim (with a straight face):

The HMDS provides a range of information symbology, including off axis targeting and cueing, day/night infra-red imagery, and flight information, directly onto the inside of the helmet visor. In addition, the HMDS incorporates a virtual head up display (HUD), which enables information currently restricted to forward line of sight in a cockpit panel mounted system, to be viewed wherever the pilot is looking; the F35 will in fact be the first tactical fighter jet to fly without a conventional HUD in the cockpit.

Advanced helmet mounted sighting systems may offer a great deal, including possibly saving your life in a dogfight, but they can make the wearer look like an extra from Plan Nine From Outer Space. Either that or it’s the love-child of a relationship between a Dalek and a Cyberman, for anybody who’s ever seen the British cult science-fiction show Dr. Who.

Or, alternatively, it may remind you of the need for caution when operating teleportation machines in an environment containing common household pests.

The helmet in question looks like a beta-test prototype. A bit of cosmetic fiberglass over the outside, and the pilot would look as menacing as any Imperial stormtrooper. Bring in the guys that came up with the front end of the Mazda sports car prototype, or someone in the Transformers design department and voila!