I love baby animals. I mean, I've got a soft spot for them. I've helped hand-rear baby elephants in the Kruger National Park, bottle-fed a baby cheetah in a wildlife reserve, and seen puppies and kittens born and grow up in my home, both as a child and later in my own apartment.

You can imagine, therefore, my reaction to this article in the Daily Mail.

In a crawling race across the grass they're evenly matched. But Emily Bland will need a little practice before taking on her new friend at tree-climbing. 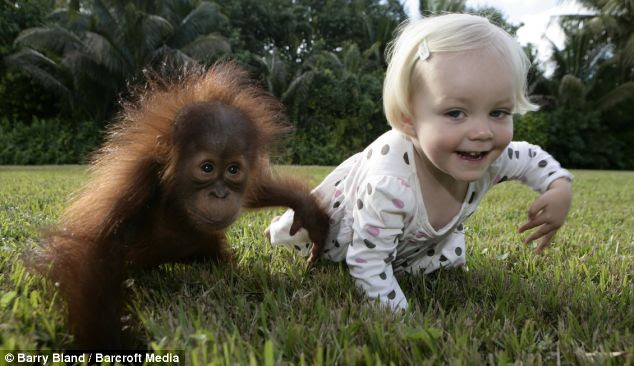 The little girl, two, met one-year-old orangutan Rishi at an animal centre while visiting with her father.

They took to each other straight away and spent hours tumbling about and having a tea party. Emily poured while Rishi waited patiently, gripping his spoon in a hairy fist.

The pair then settled down for a quiet cuddle before it was time for Emily to leave.

It was reminiscent of the scene from the 1967 Disney classic The Jungle Book, when the monkey 'King Louie' tells Mowgli: 'I wanna be like you.'

Emily's father Barry Bland, 38, a photographer, said: 'I had come along to the institute to photograph Rishi and I thought it would be good to bring Emily.

'Almost as soon as we arrived, Rishi had an instant chemistry with Emily. They looked completely content with each other.'

The friendship came as no surprise to those in charge of Rishi's home, The Institute of Greatly Endangered and Rare Species (T.I.G.E.R.S) in Miami.

Dr Bhagavan Antle: 'Orangutans are intelligent and certainly the most friendly apes on the planet.

'The youngsters enjoy their playtime and are always looking for an opportunity experience new things and make new friends and monkey around.

'Rishi, who is the youngest of the family, is always looking for someone to play with.

'That's where Emily stepped in to provide a playmate to swing in the trees, have tea with, and go for a ride. 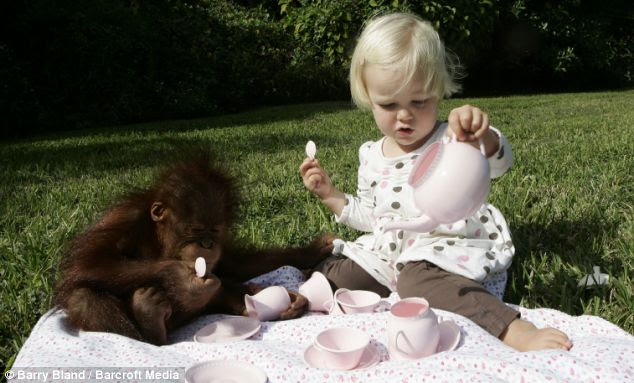 'All infants have the capacity to get along and as youngsters the barriers between species appear to disappear.'

Orangutans are one of the most endangered species on earth.

Recent expansion of palm oil plantations and over logging of their forests in Borneo and Sumatra have created a rapidly declining habitat for these great apes.

'With other species their numbers maybe less but they are stable, with orangutans their populations are plummeting,' says Dr Bhagavan Antle.

Under the supervision of their handlers, animals wander freely through the T.I.G.E.R.S institute, allowing spectators to enjoy an up close and personal experience. 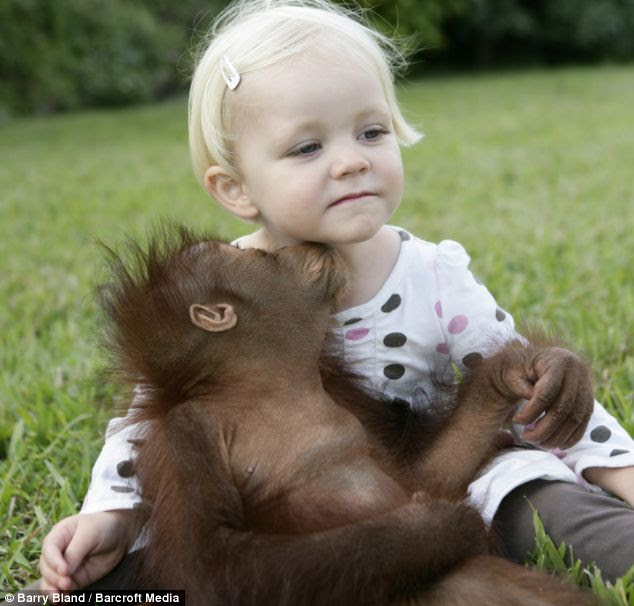 'Rishi was brought over to T.I.G.E.R.S from Jungle Island because he was a young boy,' says Dr Antle.

'He couldn't stay with his father or the other male orangutans in the habitat because they throw the boys out.

'But he is now been fully accepted into his new group. He sleeps with them and he stays side by side with them he is when them all the time.'

Rishi will now stay at the institute where he will become part of the animal ambassadors program, participating in education and conservation presentations at Myrtle Beach and Jungle Island institutions.

Judging from these photos it looks as though Rishi has found a friend for life.

All together, now: "Awwww!"

Seriously, though, I've always been amazed how the young of any species recognize the young of any other. I've watched a baby elephant and a human infant bond instantly, both recognizing that the other is a youngster, and responding to one another carefully, playing, laughing, having a wonderful time, but never getting too rough for the other. I've watched kittens play with cheetah cubs. In a few more months, the cheetahs would regard the kittens as food: but while they're both only weeks old, they recognize the infancy of each other, and play together. It's amazing, and very moving to see.

It is to bad we can not keep the attitude that children have.

The world would be a much more peaceful place.

I remember we were having a party when Zdog was a pup. Hans who was about five at the time and her would play until they both fell over with exhaustion. This would last for about fifteen minutes and then they would both go at it again. this went on all afternoon. Thanks for triggering this memory.

I had a pet orangutan as a child. His name was Roger Copied. :) Somewhere around here there's a picture of me as a 2 or 3 year old pulling him around in my wagon, and another of him riding my tricycle. My favorite photo of us together shows us both climbing on the monkey bars my dad built for me.

Thanks for the happy memories!

You put your hand WHERE on a baby elephant?