I'm staggered to read of the sums paid for movie memorabilia in a recent Hollywood auction.


Perhaps there's something wrong with me, but I can't for the life of me imagine paying good money for such things. I can understand purchasing a rare and exquisite antique (not the modern reproductions so often labeled 'antiques', but the real thing), or perhaps a rare manuscript or first edition of a particularly important book: but movie props and paraphernalia? They're ephemeral by comparison, in my opinion at least. Still, I guess if the buyers are happy . . .

I guess I'm put off by the whole 'conspicuous consumption' thing. I was rather nauseated to read a report earlier this week about a Dutch firm, Sevenstar, which operates no less than 80 (yes, that's right, eighty!) ships to ferry yachts and powerboats from one playground of the rich and famous to another. The owners couldn't be bothered to actually sail them there, you understand, or even pay their crews to do so. It's far more convenient to hire another ship to load them on board and deliver them - at an outlandish cost, of course.

To most yachtsmen, one of the great challenges is to sail the Atlantic.

But the owners of these superyachts have neither the time nor the inclination to battle ocean swells, high winds and weeks at sea.

If you're wealthy and you want to spend December island-hopping in the Caribbean - but your boat is inconveniently moored in Monaco - you turn to the services of companies such as Dutch firm Sevenstar.

Every November, the firm's giant freighter MV Spiegelgracht - seen here arriving at Road Town, Tortola, capital of the British Virgin Islands - collects a cargo of yachts in Palma, Majorca and Southampton and takes them to the Caribbean - without adding a single nautical mile to their ocean-going careers. (Click to enlarge picture.) 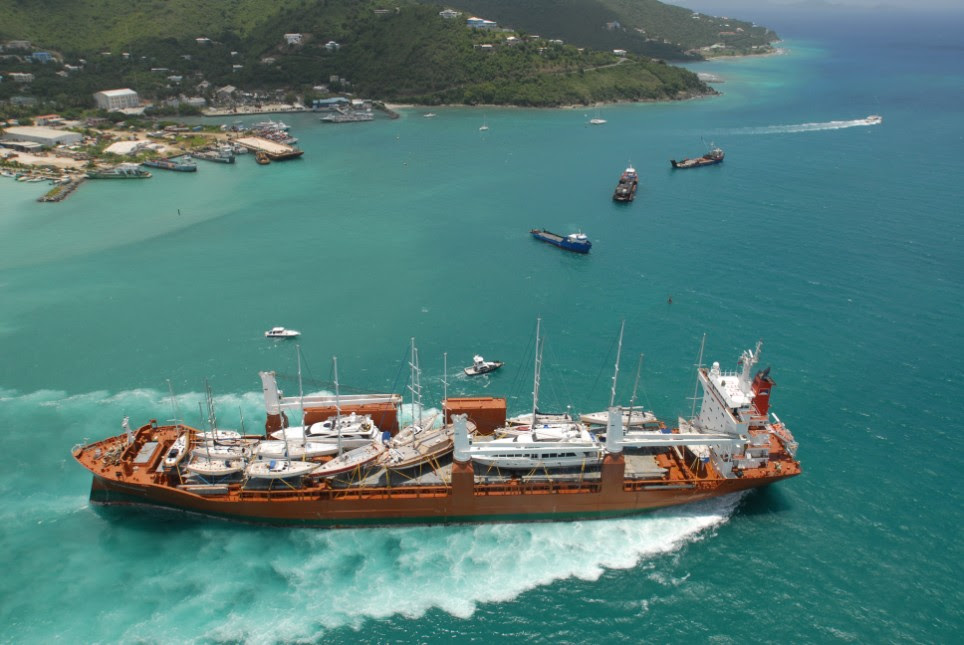 And next May, it will hoist them aboard again and ferry them back to the Mediterranean for the summer cruising season.

There are 17 vessels secured in specially designed cradles on the Speigelgracht's deck.

The multi-million-pound cargo is made up of an assortment of rich men's toys, from relatively modest sailing yachts to vast gin palaces and 90ft Sunseekers.

Each vessel has its own personal captain who oversees the transfer to the Spiegelgracht.

The sailing boats are lifted and transported on deck with the mast and the complete rig kept upright.

Before setting off, all stainless steel and chrome fittings are coated with Vaseline to protect them from the elements.

I suppose I shouldn't feel frustrated by reading stuff like that . . . but I do. You see, I know what it's like to try to raise funds for really good, worthy causes - and be turned down flat by the sort of people who own those boats, or who can afford to spend money in such sums on movie memorabilia. Right now, I'm involved in two fund-raising projects: one to build a health clinic in Africa, the other to establish a halfway-house prison ministry here in the USA. Both need capital of about half a million dollars to get moving - a drop in the bucket compared to the cost of one of those boats, for example. However, if you think that most people with that kind of money are willing to part with it for such purposes, think again!

It's very draining and depressing sometimes . . . particularly when those who've got it, flaunt it like that! Still, it's their money, and I wish them well with it. Perhaps I'll run into one or two (hopefully soon) who are less inclined to spend it on frippery, and more willing to invest in human beings.

I think SevenStar has a good gig! soak those liberal idiots for all the traffic can bear. It's good capitalism. For every need/want/desire, there is a solution.

Hey, I like Tam. Read her blog alla time. I'm not gonna untam for anybody.

I understand how you feel; I guess when you are that rich, your heart turns to stone. I will keep your efforts for finding in prayers.