Jerrycans, just in time for Christmas!


The Big Brown Truck of Happiness left four boxes in my carport this afternoon. Three of them contained Wedco 20-liter red gasoline jerrycans - the old, reliable, World War II design, not the abomination of desolation that is the new CARB-compliant version, the only kind legal to make in or bring into the USA after the New Year. A fourth box contained a couple of spouts for them, plus two siphon kits. Some of the cans are for me, some for friends. 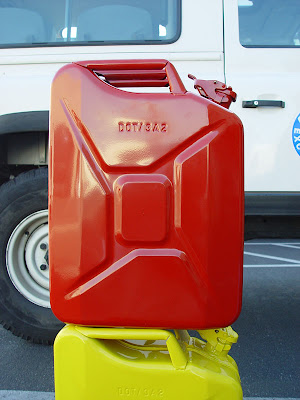 For those who don't know its history, the jerrycan was developed by Germany prior to World War II as an essential accessory to its Blitzkrieg tactics. You can read all about it at the Expedition Exchange Web site. Scroll down past the product listings and you'll find more historical information than you'll ever need, complete with pictures. Wikipedia also has some interesting details about them.

Suffice it to say that I used jerrycans in Southern Africa for a good part of the 1970's and 1980's, in territory ranging from desert, through bush and scrub, to sub-tropical swamp. Other containers (particularly the 'new and improved' plastic variety in all its horrible forms) would leak, or allow fumes to escape, or give other problems. The jerrycans gave no such trouble. Some of them were World War II cans, captured from German forces in the Western Desert in 1941-43 and brought back to South Africa: yet, despite their age, they were still going strong and giving trouble-free service.

As I said, plastic cans and cheaper metal imitation jerrycans proved to be an abomination. You want to develop a rapid and almost terminal case of Zulu Revenge? Try eating food that's traveled in the back of a Land-Rover with a leaking gasoline container. Even if the gasoline itself doesn't get out, the fumes will contaminate everything nearby, with a resultant effect on your gastrointestinal tract that makes euthanasia seem like a desirable alternative!

(And yes, 'Zulu Revenge' is comparable to other well-known maladies such as 'Montezuma's Malady', 'the Cairo Curse', 'Delhi belly', 'the Roman Runs', 'the Taliban Two-Step' and 'Iraq-around-the-clock', to judge by comments from my veteran relatives and friends, who've served in those regions during various and sundry wars. Of course, the names they used were frequently somewhat less, er, sanitized - you should pardon the expression - than those I've given!)

Regrettably, the new CARB-compliant 20-liter jerrycan is far less satisfactory. That's not the manufacturers' fault. The bureaucrats at the California Air Resources Board came up with the requirement for the redesign, allegedly because of the vast damage to the environment caused by escaping gas fumes. (The fact that a single typical California forest fire produces more undesirable gases than about fifty years' worth of escaping fumes, from all the portable gasoline and diesel containers in the USA, apparently didn't cross their minds . . . ) The Environmental Protection Agency has adopted the CARB recommendations, and is implementing them nationally as of next year.

EPA is establishing standards that will limit hydrocarbon emissions that evaporate from or permeate through portable fuel containers such as gas cans. Gas cans are consumer products used to refuel a wide variety of gasoline-powered equipment, including lawn and garden equipment, recreational equipment, and passenger vehicles that have run out of gas. The new requirements also apply to diesel and kerosene containers. Starting with containers manufactured in 2009, the standard limits evaporation and permeation emissions from these containers to 0.3 grams of hydrocarbons per gallon per day. We are also adopting test procedures and a certification and compliance program in order to ensure that containers meet the emission standard over a range of in-use conditions.

EPA has worked closely with major container manufacturers and it is expected that the new cans will be built with a simple and inexpensive permeation barrier and new spouts that close automatically.

Thanks to the bureaucrats, the new design lacks the ease of pouring of the old one (spillage is almost guaranteed, according to friends who've tried them). They're equipped with an integral spout, without which one can't pour from them into a vehicle's gas tank. Even with the spout, I think one needs to be a three-handed gorilla to succeed! It's a thoroughly unsatisfactory development, but as of January 1st, 2009, that's the only fuel jerrycan that can be legally manufactured in or imported into the USA. Once existing stocks of the old variety are sold, that's it. You'll never be able to get the 'old reliable' jerrycan again.

So, friends, if you rely on portable gasoline containers for any purpose at all - refueling gardening machinery, off-roading, boating, emergency supplies of gasoline or diesel for a bug-out situation, whatever - I can't recommend too strongly that you get hold of some original-design jerrycans while the going's good. They're not cheap, but the best never is. In particular, if you envisage a situation where you might have to have (a) fuel container(s) in the passenger compartment of your vehicle (e.g. in the back of an SUV or minivan in a bug-out situation, like getting out of the way of a hurricane), the jerrycan is the only way to go. It won't release fumes to poison the atmosphere - or your food supplies! - provided you keep the exterior wiped clean and dry.

The supplier I used, Expedition Exchange, has already sold out of diesel (yellow) jerrycans, and only has the gasoline variety (red) left in stock. Nevertheless, if you need diesel jerrycans, I'd strongly advise buying some of the red ones, then picking up a couple of spray cans of yellow paint from your local store and re-painting them yourself. They're good enough that it's worth the extra trouble. Also, some states already prohibit the sale or shipment of non-CARB-compliant jerrycans. If your state's one of them, and you have friends in adjoining or nearby states who can still legally receive them, I'd advise that you have them shipped there.

There aren't many places with stocks of original-design jerrycans left. I know and recommend the Wedco brand, but I can't speak for others. Be careful to insist on a brand that's welded all round at the seams, not solder-sealed - the latter invariably develop leaks, sooner or later. You've got seven days left to order a few for yourself, or lose the chance forever: so, if I may suggest it, buy yourself a New Year's present! Expedition Exchange has a special offer, four jerrycans in a 'mix-and-match' size configuration for up to $20 off, which is what I bought. You can get any combination of 20-liter (5.3 US gallon), 10-liter (2.65 gallon) or 5-liter (1.32 gallon) cans. I think it's a worthwhile investment. (And no, I'm not on their payroll and don't get any freebies for mentioning their name - they just gave me very good service, for which I'm grateful. I'm returning the favor by giving them some free publicity.)

I hope this is helpful to those who use or need portable gasoline or diesel containers.

It's an "ouch" time to spend that much money, but it's money well spent. Thanks for bringing this to my attention. Arizona had a pipeline break a few years back, and for about a week gas couldn't be had. It was a reminder that it doesn't take SHTF to cause a critical shortage. Since then I've been looking for good gas cans, not those awful plastic pieces of junk the stores sell now, so that I can always have at least an extra tankful on hand. Yeah, I'll have to rotate it before it goes bad. Such are the chores associated with being a squirrel.

I'm not sure which article of the constitution covers regulating the design of Jerry cans. I'm sure the lawyers would say it does, but to them "growing silage" means "commerce" and "intrastate" means "interstate."

This reminds me of the new fuel spouts at the gas station, designed to recover fumes. The ones with a spring loaded, accordion cover on them. The ones that pop off the fuel orifice and spill gas all over the ground. I wonder how many fumes have to escape into the atmosphere to equal ONE spillage. The law of unintended consequences is something the Do-Gooders do not comprehend-