Sailing on a spider?


I'm intrigued by a report in the Daily Mail about a new design of seagoing vessel, which looks rather like a spider dancing over the waves.

The WAM-V, or Wave Adaptive Modular Vessel, blasts along on two giant inflatable tubes which, according to its designers, let it 'dance' with the waves. 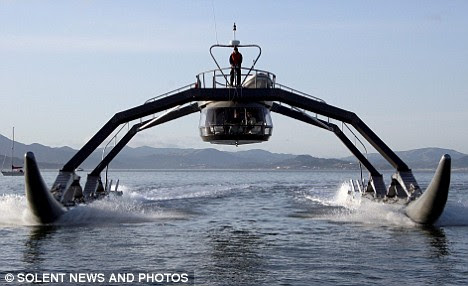 Powered by twin diesel engines, the spider-like craft can be crewed by just two people as it tackles voyages of up to 5,000 miles.

And best of all, designers claim the boat, nicknamed Proteus, is so light that its fuel consumption is 'significantly lower' than other boats of a similar size.

The catamaran has been built by US-based Marine Advanced Research Inc to carry out studies of the world's oceans.

But designers say the vessel could, in the future, be used as a luxury cruiser, a scuba diving boat or a passenger ship for up to 12 people.

They say they have already designed, manufactured and tested 8ft radio-controlled models and a 50ft personal craft as well as the 100ft Proteus.

A spokesman for the group said: 'The WAM-V is a new class of watercraft based on a patented technology that delivers a radically new seagoing experience.

'These ultralight flexible catamarans are designed to allow for a variety of applications and to fit the requirements of specific users, missions or projects.

'Unlike conventional boats, the hulls of a WAM-V conform to the surface of the water.

'A WAM-V does not push, slap or pierce the waves - she utilizes flexibility to adapt her structure and shape to the water surface.

'Instead of forcing the water to conform to the hull, she gives and adjusts. She dances with the waves.' 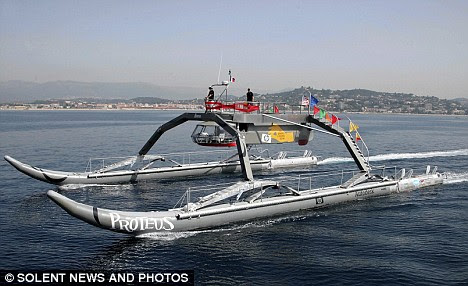 The spokesman said the WAM-V could even be used for watersports, adding: 'Your WAM-V could be the means to a new extreme sport experience.'

The main structure of the boat is constructed of titanium and aluminium and is connected to the twin hulls by ball joints fitted with springs and shock absorbers.

Two engine pods, containing the propellors and ancillary systems, are fastened to the hulls with special hinges that keep the propellers in the water at all times.

Despite displacing 12 tons when carrying its full load of 2,000 gallons of fuel, designers claim it handles like 'a small powerboat'.

I found this video clip of the WAM-V being demonstrated in San Francisco Bay.

Interesting! I wonder if this'll be further developed into a commercial product? It looks to me as if it could work in swampy environments such as the Lousiana wetlands or the Florida Everglades, currently the province of airboats. Might be interesting to see how this copes with such environments.

I'd be more interested in seeing some pics of this craft in 15 and 20 foot seas. Somehow I think its performance would be drastically different.

Looks kinda top-heavy to me and has a center of gravy above water-level. I'd bet they would have trouble in 3-4 foot waves.

Gaah. That's gotta be the worst video editing job *EVER*! All those jump cuts - makes the most frenetic music video seem sedate. Can't watch the damned boat do anything for more than a second or two at a time before that epilepsy-inducing flashing starts up and you get thrown to another different view of the boat.

Um.. what happened to the video? I wanna see this thing right itself after flipping over.

Put down that champagne and heave everyone!