Danger and rescue in the deep oceans


I don't know how many readers have been following the progress of the Vendee Globe around-the-world yacht race, which began in France on November 9th. I blogged about it at the time.

It seems that the dangers inherent in so long and demanding a race have struck once more. Yachtsman Yann Elies, skipper of Generali, fell and broke his femur a few days ago.

This is an extremely dangerous injury, because of the huge blood vessels running through the thigh. If a sharp edge of fractured bone were to cut into one, death would follow in a matter of minutes. Elies was so badly hurt that he could only crawl into his cabin, very slowly, over a matter of some hours, fighting the pain, and lie down inside. He couldn't even reach his medical kit to self-administer morphine. 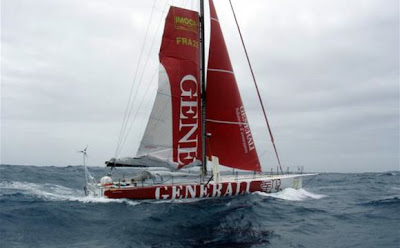 He was able to broadcast a distress message, and several competitors in the race immediately abandoned their headlong rush for Cape Horn and turned towards him. This is one of the most impressive aspects of international ocean racing - human life always comes first. I've seen it in a number of similar races. Even the leaders have been known to turn back if necessary.

First to reach him was Marc Guillemot, skipper of Safran, who arrived there two days ago and waited nearby.

Being alone on his yacht, of course, he couldn't leave his ship to board Generali and care for Elies: but he called him by radio, sailed as close as he dared to toss supplies directly into the cabin door, where Elies could reach them, and broadcast reports to others. If any serious problem had arisen, such as the approach of really bad weather, he'd have stood by to do what he could. I can only imagine that under such circumstances, he'd abandon his own yacht, go aboard Generali, and try to steer her safely through the storm while allowing Elies to remain strapped down.

Meanwhile, the Australian Navy sent its frigate, HMAS Arunta, on a high-speed dash from Fremantle to rescue Elies, who was just over 900 miles South-West of Perth at the time. 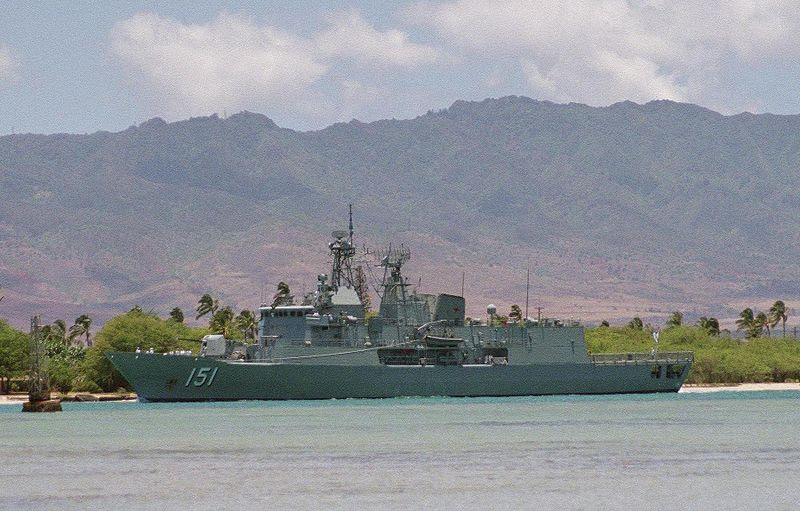 She reached the scene today, and in a neat bit of boat-handling stood 200 yards off Generali, forming a lee with her hull, while personnel boarded the yacht in an inflatable boat. They were able to stabilize Elies and transfer him to the frigate, and he's now on his way back to Australia for treatment. 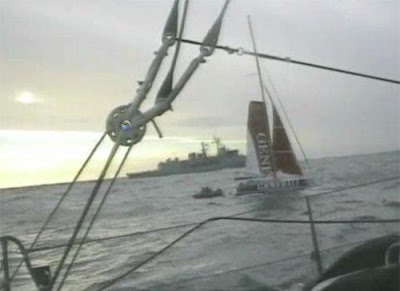 His yacht has been left unmanned, its computerized autopilot steering it slowly North, out of the way of likely weather problems. A crew is flying to Australia from France, and they'll charter a ship to take them to her position, board her, and sail her back to Australia.

The picture above and video below were taken by Marc Guillemot, still standing by Generali. He's now resumed his charge for Cape Horn, and I'm sure he and the others who made for Elies' position will have their race time adjusted by the organizers to compensate for their efforts, as usually happens in such cases.

(Note: the video volume is extremely soft for the first 1m. 44s., then picks up to normal levels.)

Well done to all concerned!