Two news reports made me laugh today. While the perpetrators and originators of the ideas concerned doubtless meant well, as the great Robert Burns observed in his 'Ode To A Mouse':

The first report is from Dhaka, Bangladesh.

No one was hurt in the incident which took place in the city's Gulshan diplomatic area.

Guards captured the bull in a net and handed it back to its owners, police and witnesses said.

Parts of the Bangladesh capital, a city of 11 million people, have turned into cattle markets ahead of Eid on Tuesday, when officials say up to 2.5 million bulls and goats would be slaughtered across the city.

Slaughtering animals and sharing meat with relatives and the poor are mandatory for every Muslim who can afford it.

That must have been fun! I mean, we joke about 'a bull in a china shop'. How much better must it be if the bull has an entire shopping mall for his entertainment? Also, if I were a bull about to be fed to relatives and the poor, I'd want to take full advantage of my last and greatest opportunity to express myself!

The second report is closer to hand, from Indianapolis.

Searching for a truly original holiday gift, one that could bestow a bit of immortality on a loved one or a friend?

If so, Purdue University has the goods: The school is auctioning the naming rights to seven newly discovered bats and two turtles. Winning bidders will be able to link a relative, friend or themselves to an animal's scientific name for the ages.

The first of the nine auctions began Monday, when the school put up for grabs the naming rights to a tiny gold and black insect-munching bat found in Central America. 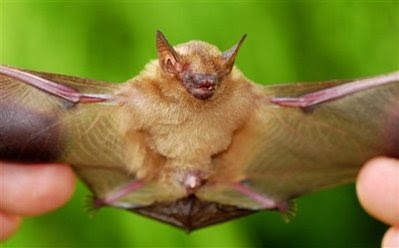 The winning bidder will be announced just before Christmas, said John Bickham, a Purdue professor of forestry and natural resources who discovered or co-discovered the nine species.

He expects the auctions to attract wide interest, with the chance to include a person's Latinized name in a new species' scientific name — a tradition that dates to the mid-18th century.

"Unlike naming a building or something like that, this is much more permanent. This will last as long as we have our society," he said Monday.

Bickham said he doesn't think that the fact that they could name someone after a bat would dissuade would-be bidders from bidding on the seven bats.

"Bats may be an acquired taste," he said, "but there are a lot of people very interested in them and very concerned about their welfare."

Er . . . well, yes, if you say so . . . but don't we describe irascible elderly ladies as 'old bats'? Wouldn't naming a bat after someone you love convey the wrong impression?

"Merry Christmas, darling! Instead of putting something ordinary under the Christmas tree, I've named a bat after you!"

This could get interesting!

Ya know, Mythbusters did a bit about the bull in a china shop thing once. They set up a bunch of fairly closely-spaced shelves, loaded down with (super-cheap) "china", and let loose a couple of bulls.

Not a single item was damaged...until Tory launched himself at the shelves, just to create the destruction they had hoped would come from the bulls.

I heard on the radio that the University was selling the naming rights for a couple of species of bats plus that for two turtles found recently.

One of the bat species was supposed to be almost as large as the Fox bat.

Hell, I'd take that gift and gladly. Then again, I like bats quite a lot.

Gary Larson and Terry Pratchett have both been honored by the biological community in this fashion... but their species aren't particularly glamorous either. :)