Doofus #117 is from Mountain Home, Arkansas - a place I've visited.

Bare footprints on a toilet seat led sheriff's deputies to find a man hidden away inside a Baxter County gas station ceiling, apparently "on a mission" to steal, officials said Tuesday.

An hour passed and an employee decided to check on Fleming. The bathroom was empty, but the employee found footprints on the toilet seat and a ceiling tile torn down, Bushbacher said. The employee called police after hearing rustling into the gas station's ceiling.

A sheriff's deputy arrived and called out to Fleming, asking him to come down from the ceiling. Fleming initially refused, but crawled out of the ceiling in the men's room 30 minutes later, Bushbacher said.

When asked what he was doing, Fleming told the deputy he was "on a mission" to steal, Bushbacher said. Though he acted irrational, Fleming did not have an odor of alcohol about him at the time of his arrest, the sergeant said.

"The officer this morning said that the guy was somewhat irrational," Bushbacher said. "Well, yeah. The guy comes into a business at 1:30 in the morning with no shoes on and is going from bathroom to bathroom crawling around in the ceiling. I can see how you could classify that as irrational or somewhat unusual behavior."

Uh-huh. I'd say one of his more irrational acts was to walk barefooted through gas station bathrooms! Those I've had to use during my travels have rarely been what I'd describe as hygienic.

Doofus #118 is from Columbus, Ohio. There's a video clip at the link.

A man suspected of robbing a north side gas station early Monday was arrested outside the Ohio State Highway Patrol training center.

They fled the scene in a pickup. Police put out a description of the vehicle and an officer spotted it on Interstate 71 near Weber Road.

The officer followed the pickup and pulled it over on 17th Avenue, Ramos reported. The driver of the vehicle surrendered to police, but the passenger ran.

Police caught up with the man at the Ohio State Highway Patrol training academy, Ramos reported. 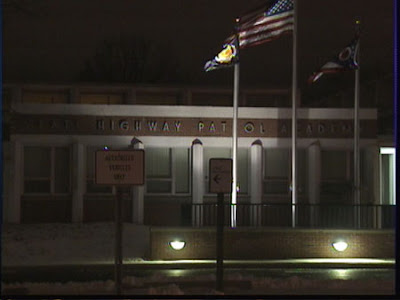 "That is a little comical," said Columbus police Sgt. Greg Bodker. "One of the officers was directly behind the suspect who fled on foot so I don't believe he would have gotten in there, but he did get to the porch and attempt to open the doors."

You know, it's a sure sign of desperation when a crook tries to take refuge from an arresting officer in a police academy!