Of eggbeaters and crime


"Eggbeaters and crime?" I imagine readers asking, in some puzzlement. 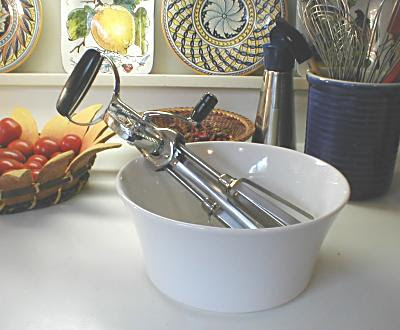 My attention was piqued by a news report about a strange armed robbery in Florida.

All they wanted was the eggbeater.

According to the Hillsborough County Sheriff's Office, Robert Thompson and Taurus Morris threatened a Plant City man Sunday for the eggbeater. Morris was holding a gun while Thompson held a knife to the resident's throat.

The suspects face charges of armed burglary of a dwelling and are being held in Orient Road Jail. Thompson also faces a charge of aggravated assault.

The eggbeater was found in his pocket when he was arrested.

That's the entire report. No word as to why Thompson wanted the eggbeater in the first place, or why a kitchen tool that retails for a few bucks at Wal-Mart would necessitate an armed robbery to obtain one. I mean . . . risking umpteen years behind bars, for an eggbeater???

Intrigued as to the criminal possibilities of this implement, I did an Internet search on the word to see if I could turn up anything. What I found was actually quite interesting, in a stream-of-consciousness sort of way.

Did you know that the eggbeater was invented in 1870 by Turner Williams of Providence, Rhode Island? He was assigned US Patent 103,811. (Click to enlarge.) 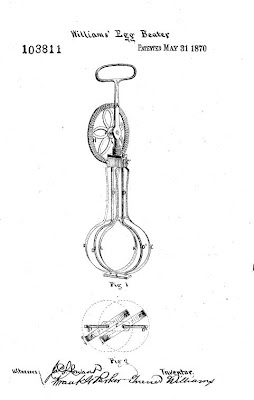 The first electric 'standing mixer' was invented by Herbert Johnson in 1908. An industrial-size version was available by 1915, followed in 1919 by the first domestic-size 'food preparer', called the 'KitchenAid'.

That was all very well, but it didn't give me any links to potential criminal uses of a blender: so I kept looking. All sorts of fascinating bits and pieces emerged. Did you know:


All very interesting . . . but still no criminal connotations!

A few possibilities come to mind for pun-ishment:


Readers, I'm stuck. For the life of me I can't figure out what would make an ordinary, everyday eggbeater the target of an armed robber. Do you have any ideas? If so, please share them with the rest of us in Comments.

Now, the eggbeater bicycle pedals are... lucrative, especially the titanium ones. (By that I mean they're screaming expensive) That said they do very well what they're designed for.

Some people are just nuts, Peter.

I acknowledge that you might have mentioned that time or two yourself. ;)

E(gg)xactly what goes on and in the criminal mind often eludes me but, I'm a good egg and figure you egged me on so I'll try to crack this case...*8P

I venture to think that it falls into one of these peiece....

All are guesses...in an eggshell...