I've just come across a remarkable photograph of the entire range of Boeing jetliner production since the 1950's. Flickr user Jason Miller posted this picture, released by Boeing on July 12, 2007. (Since it was a Boeing publicity photograph intended for distribution, I'm able to reproduce it here without infringing anyone's copyright. Click the picture for a larger view.) 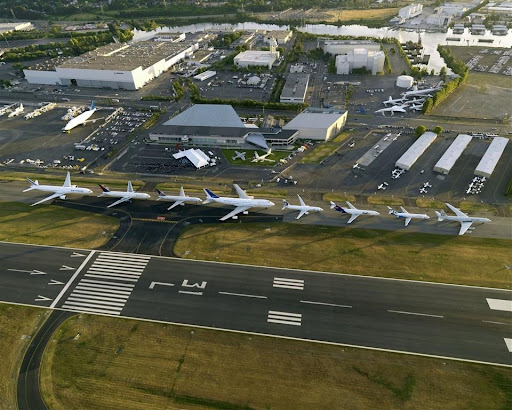 He describes it as follows:

That was a clever idea on someone's part at Boeing, to have every generation of their airliners lined up like that! I don't know whether the earlier models will still be flying by the time the successor(s) to the 787 take to the air. Aviation enthusiasts might want to keep a copy of this picture for posterity.

Thanks to Jason Miller for putting a copy of Boeing's photograph on Flickr. It's great to have it in circulation.

Take note that the 717 was developed in the 90's - making the timeline of aircraft slightly inaccurate.

I noticed the 727 was in FedEx colors. A few months ago, I was at the ramp in South Texas, and our ramp agent mentioned that the '27 sitting outside was the last one made. Got my picture taken in front of it.

FedEx has turned out a bunch of 727-100's. 2 are sitting near training facilities at the big field here in South Texas.

There is one 7-series type missing from this photo. Who can name the missing bird?

Barnaby, are you thinking of the 720? I don't consider that a separate type, as it was a modification of the 707 series.

Neat pic, and probably won't ever be repeated...

My workplace is in the photo, so I think I will add some detail here.
That 717 was not designed by Boeing. It was a MD-90 (originally Douglas DC-9) made by McDonnell Douglas when it merged with Boeing in 1997. It was remained the 717 long after the higher numbered planes were in production.

There was an earlier 717 which was to be a scaled down 707, but it failed utterly and afaik no examples remain.