Looking back at an aviation near-disaster


Last week I wrote about the Qantas Airbus A380 that had to return to Singapore with near-catastrophic damage after one of its engines exploded. Reader Emil G. e-mailed me a link to the story of a Northwest Airlines pilot who, along with a double crew, only just succeeded in getting a crippled Boeing 747 into Anchorage, Alaska, some years ago. They experienced a different kind of problem, but one that was almost fatal. Here's an extract.

After taking off from Detroit in October 2002 and reaching the halfway point over the Bering Sea, Hansen and his co-pilot were retiring to the crew bunk while the other two officers took over for the remainder of the trip:

I was just settling down with my book and I felt the airplane do a very odd maneuver. We could feel the airplane doing something very significant and abnormal. And, after about eight or ten seconds after they recovered from it, I knew this was not right. I got up and began putting my uniform on. (First Officer) Dave (Smith) did the same thing. And just then, we got the emergency crew call from the cockpit. There's a chime that they can ring. And when the chime goes off, it means we need you right away.

And we heard the chime and Dave and I proceeded to the cockpit. When we got in the cockpit we saw Frank, the other captain — Capt. Gibe, fighting the controls. And he had the control wheel over about halfway, which is really odd at cruise. You never see that. And you could see his leg was straining on the rudder pedals.

Now one thing that's important to point out: the 747 is built with an upper rudder and a lower rudder. They're designed with two hydraulic systems powering each one. Normally, they operate together and, to an observer looking at that airplane from a distance, you couldn't tell that it's a split rudder.

Well, Capt. Gibe was holding full rudder pressure with his right leg; normally putting both of the rudders completely out to the right. On the lower computer screen in front of the pilots, we have a what we call a control position indicator which shows the position of all the primary controls on the airplane. The lower rudder had gone unexplainedly and quite suddenly out to the left. It was normally limited by the airplane to six degrees of rudder throw at altitude, and the rudder had gone from zero to almost eighteen degrees in less than one second. We were at approximately 35,000 feet.

He was explaining this while he was fighting the controls and trying to fly the airplane. And he said that with the auto pilot on, the airplane had suddenly begun an uncommanded roll to the left. And it was about almost halfway to wings vertical before he realized that the auto pilot was not going to handle this, and snapped the auto pilot off.

The four of us proceeded to take the cockpit operating manual, which is a red manual that we have in the cockpit designed to cover all of the emergencies that you would think that you might expect to encounter. This was not in the manual.

We at this point had declared an emergency and we were proceeding back to Anchorage. We had done a left turn because that was the only direction the airplane would turn. I was sitting behind Frank thinking to myself that the outcome of this is most definitely in doubt. 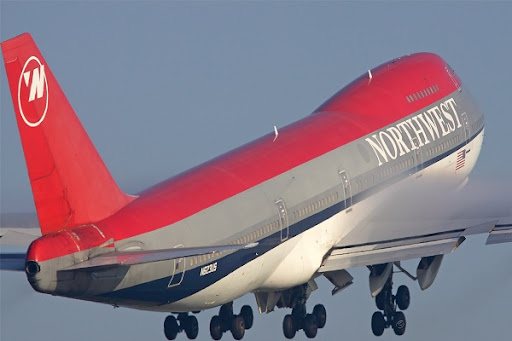 Mike Fagan, the co-pilot, was handling the airplane. When I got in the (left) seat, he says, OK, are you ready? He gradually took the force off the controls as I gradually came in with the force. And I was pretty appalled at how poorly the airplane was handling. It was flying really lousy. But the point is it was flying. We didn't want to touch too many things right then because it may have been in a very delicate balance situation.

It took as much force as you could put into the rudder pedal to keep that upper rudder out to the right as far as it would go. And all that did was give you straight ahead. So you'd push as hard as you could with your leg, you could only do it for about ten minutes and then you'd have to switch with the co-pilot. So Mike and I took turns. We were about an hour and forty minutes west of Anchorage, about 500 miles.

The exchange of information among the four of us was really good. It's like the old phrase, "Love finds a way." And when you know you've got to communicate about something it's amazing how quickly those ideas flow back and forth, and I encouraged it. I said, if anyone has any ideas about anything, please speak up. It was obvious that the two things that were going to get this airplane on the ground were teamwork and good old-fashioned hand-flying, seat-of-the-pants flying.

We ... had a conference call with the company and we had to do this with a primitive radio called HF, which is like you saw Clark Gable doing in the movies in the 1940s. It's a very primitive radio. But it was the only thing that would work out over the Bering Sea.

And our main questions were does anyone know what could be wrong with this rudder? And the second question was, we see nothing in the book about how to get this airplane back on the ground.

And the answers that we got back...no, nobody has any idea what's wrong with your rudder, sorry, and, no, there's nothing in the literature, you're basically on your own.

There's more at the link. Needless to say, they made it safely to Anchorage - or else Captain Hansen wouldn't have been telling his story! It makes interesting reading . . . albeit a bit scary!

I'm very glad that there are such competent and highly-qualified aircrews out there. Having flown for many thousands of miles over Africa, with local pilots whose qualifications and skills were, shall we say, not altogether of that caliber (!!!), I've learned to appreciate having the best available pilots in the pointy end of the plane. This account reinforces that opinion!

When I was learning to fly, I was told that the cockpits of the future would have a man and a dog.

The man is there to watch the computers; the dog is there to bite him if he touches anything.

I, for one, like the element of human control.