Spider-Man hits Broadway - or is it the other way round?


I had to laugh at a review in the New York Post of the so-called 'preview' of the musical Spider-Man: Turn Off The Dark on Broadway. 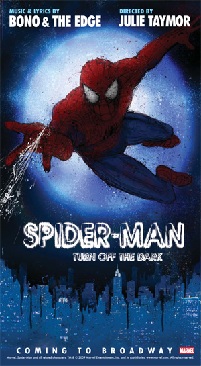 Stunned audience members were left scratching their heads over the confusing plot -- when they weren't ducking for cover from falling equipment and dangling actors at the Foxwoods Theatre on West 42nd Street, some said.

At various points, overhead stage wires dropped on the audience, scenery appeared on stage missing pieces -- and the show's star was even left swaying helplessly over them midair during what was supposed to be the climatic end to the first act.

The production -- directed by Julie Taymor of "Lion King" fame and with a score by U2's Bono and The Edge -- appeared cursed from the start, audience members said.

The spider is the radioactive arachnid that bites Peter Parker, giving the photographer his superhuman Spider-Man powers.

As the character, played by actress Natalie Mendoza, finished her big number "Rise Above" while suspended over the crowd, an apparent wire malfunction left her stopped in midair -- where she remained for an embarrassing seven or eight minutes as stagehands worked feverishly to figure out the problem.

The stage manager finally said over the loudspeaker, "Give it up for Natalie Mendoza, who's hanging in the air!"

The show had to be stopped four times in the first act alone for various snags.

Parker's love interest, Mary Jane, was supposed to be saved from atop the Chrysler Building. But part of the building was missing, and Mary Jane was no where in sight.

As puzzled theater patrons looked around, Spider-Man -- played by Reeve Carney -- suddenly flew in with Mary Jane in his arms and put her down on stage.

He was then supposed to fly off in a dramatic end to the first act.

Instead, Spider-Man got stuck in midair and swung back and forth over the crowd as three stagehands leaped up and down futilely trying to grab onto one of his feet to haul him back to earth. 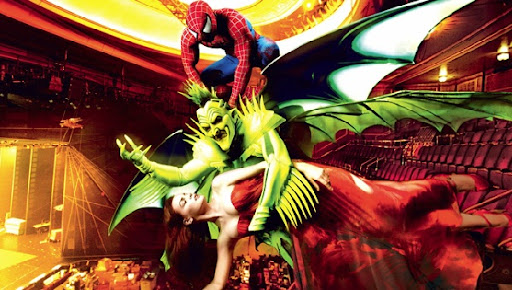 As the Goblin -- played by Patrick Page of "Grinch" fame -- sat down at the piano for a scheduled number, he was left to continue playing on . . . and on . . . as stage workers openly rushed around to fix faulty equipment.

"This is the best part of the whole show," grumbled theatergoer Steve Poizner of California.

I spent quite a few years fiddling around with amateur dramatics back in South Africa. I can remember several disastrous performances . . . but nothing quite as disastrous as this seems to have been! It took me quite a while to stop laughing at the picture painted by the reviewer.

The only consolation I can offer the cast is that if this much is going wrong at the preview stage, the first night should be solid gold comedy!

In this case, 'break a leg' might have more ominous overtones..

On the other hand, perhaps they're getting all of their bad luck out of the way in one go.

Having spent the last few years doing community theater, I can vouch for the saying that "A bad dress (rehearsal) means a good opening night."

However, that's not a hard and fast rule. There's another one that says "Never fly anyone on wires if you can avoid it. It's the one thing most likely to go wrong."

I've seen it first hand, and it is truly as comical as this review makes it out to be. To think anyone in their right mind would pour this much money into a production only to have it flop on so many fronts is unthinkable. They have closed the previews, fired the director (Julie Taymor) and are busy moving deck chairs on the Titanic, but nothings going to save this turkey. For anyone contemplating it, spend your hard earned money anywhere else. This sucker is as big a trainwreck as Charlie Sheen.