World's most expensive bottle of tequila?


There's a new entry in the conspicuous consumption sweepstakes. The Daily Mail reports:

A Mexican distiller has produced what it hopes will become the world's most expensive tequila in a platinum and diamond-studded bottle.

Hacienda La Capilla's 'The Diamond Sterling' comes in a 1.3-litre ceramic bottle coated in more than 5lbs of platinum.

But that's not all: the bottle is encrusted in more than 4,000 diamonds, totalling 328 carats. 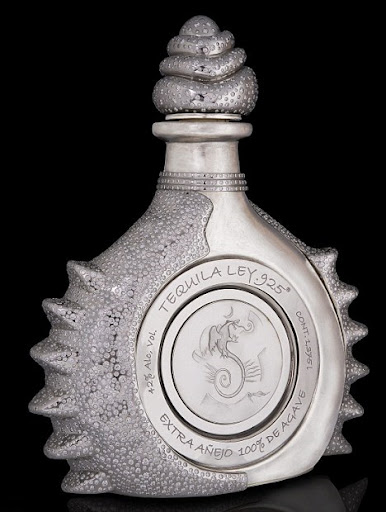 The bottle is crafted by renowned designer Fernando Altamirano and is valued at around $3.5million.

The liquor inside is not half bad either: a rich seven-year aged tequila straight from the Mexican state of Jalisco.

... the company said they hoped their newest creation would fetch $3.5 million (£2.2 million).

I'm assuming there's a worm inside, in the finest tequila tradition . . . at least, I hope there is. That way, if anyone's fool enough to pay that much for it, someone else can ask incredulously, "You paid how much? For a worm?"

Labels: Business and Commerce, Food and Drink, Funny, Silly, The Mind Boggles
Email ThisBlogThis!Share to TwitterShare to FacebookShare to Pinterest

Actually, true tequila doesn't have a worm in it; mezcal, the dregs of the fermentation process, has the worm, to absorb any toxins that "may" have been occasioned in the processing - not caring for tequila in ANY form, I couldn't tell you the difference between high quality tequila and the lowest form of mezcal .................... ;-)

My wicked self would drink half of it and top it off with urine; the looks on the faces of those tasting "the world's most expensive tequila" would make a hilarious video!

Luckily for humanity, my wicked self is locked away.