Back in June I reported on the imminent re-entry of Japan's Hayabusa space probe, which had rendezvoused with and landed on asteroid 25143 Itokawa, and had returned to Earth after many years in space. 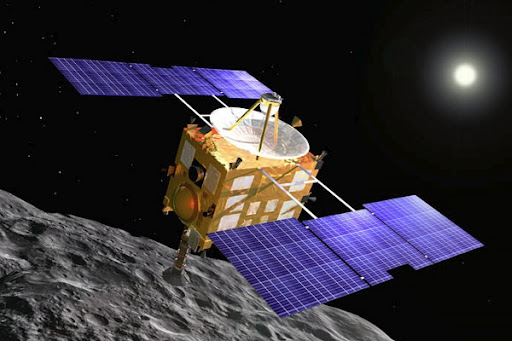 The probe duly re-entered Earth's atmosphere on June 13th and broke up, as planned, but not before ejecting a recovery capsule that parachuted to earth in Australia. It was hoped that the capsule would contain material from the asteroid. Here's a video clip of Hayabusa's re-entry and the capsule separating from it.

The capsule was taken to Japan and carefully opened and examined over a period of some months, to safeguard any asteroid material it might contain. Earlier this week it was announced that the Hayabusa mission had, indeed, succeeded in its objective.

A Japanese space probe that ended a seven-year voyage earlier this year brought back dust from the surface of an asteroid for the first time, Japan's space agency said on Tuesday.

Scientists hope the particles will help unlock secrets of the solar system's formation.

Japan Aerospace Exploration Agency (JAXA) says the particles may offer clues about how the solar system was formed 4.6 billion years ago.

Asteroids are believed to have retained their original state over time, unlike the Earth's surface, which has been affected by atmospheric changes, water and volcanic activity.

"There is so much that humans don't know, such as how the Mo on was formed," a JAXA spokesman said. "But research, not just into these particles but into other findings, could provide us with hints on how the solar system and the planets were formed."

Congratulations to JAXA on a wonderfully successful mission! When you think about it, it's an extraordinary achievement. They targeted an asteroid 300 million kilometers from Earth (about 186.5 million miles), and achieved rendezvous after a 28-month journey; then traversed the same distance in reverse to get back home, and dropped the capsule into a precisely-targeted landing zone after covering over 600 million kilometers during more than seven years in space. That's pretty phenomenal accuracy in anyone's language!

Hayabusa has recovered the first material from any object in the Solar System other than Earth's Moon. It's bound to provoke all sorts of excitement and interest in the scientific world. Full marks to Japan and JAXA for leading the way. I'm only sorry that NASA and the US government seem to be willing to abandon the leadership they once had in the 'space race' to other nations!

Peter, your kilometer to mile conversion is out by a factor of a thousand. Still a fair distance though.

{Blush} Oops! Thanks for the heads-up. I've fixed it.