According to NPR, McDonalds has a secret menu. Despite being unpublished, they claim that if you go up to the counter and order something listed on it, you can get it. They mention 'the horrifying Land, Sea, and Air Burger — that's a beef patty, a chicken patty, and a filet-o-fish patty.' Sounds ghastly! It's pictured below. 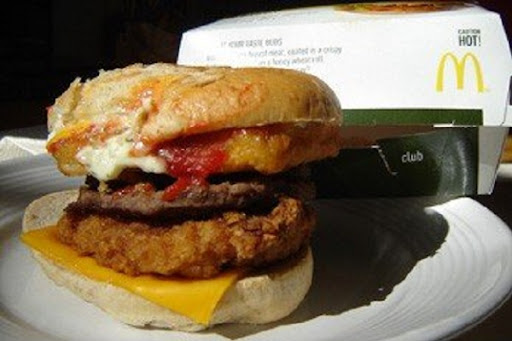 Intrigued, I did a bit of investigating. The Coupon Sherpa Web site claims that 'secret menus' are actually fairly common.

Mention "secret menus" and many people think of hidden functions on Blackberries or Xbox games. Actually, secret menus refers to items you can special order at restaurants that aren't mentioned on standard menus.

Some places, like Chipotle Mexican Grills, have a whole secret menu that's limited only by your imagination. On the other hand, In-N-Out Burger's secret menu" is so unsecret it's posted on their Web site. Kind of takes the cool factor out of having the inside scoop, doesn't it?

If you're looking to impress a date or just like that feeling of "knowing the chef," here are 24 restaurants that offer secret menus.

There's more at the link, including examples from the 'secret menus' of restaurant chains such as Arby's, Burger King (including a 'suicide burger'), Chili's, Dairy Queen, KFC, Long John Silvers, Starbucks (try a 'cake batter frap' or a 'red tux mocha') and Taco Bell.

Brendan Twist, writing at Asylum.com, decided to take Coupon Sherpa's lists and try to order some of the items they mentioned. He sampled several of the 'secret menu' items. His verdict on McDonald's Land, Sea & Air burger?

I admit, it was an experience. Those fine, accommodating folks at Mickey's even threw on an extra burger patty just for fun. After staring at it with a mix of trepidation and glee, I opened wide (really wide) and went for it.

It was absolutely the filthiest piece of crap I've ever eaten, and I mean that in the worst possible way. That said, it's a great way to impress your friends -- if you're a college freshman who's desperate for acceptance.

Peter, I went to the article and also read the comments.

In reading the comments I was struck by how many people think their relatively small world of existence is the standard for the rest of the world. Many of the comments there are of the "If it isn't at my [insert chain name here], it isn't at any of them."

I found that more interesting than the secret items!

I remember going to a McDonalds in Las Vegas once and being pleasantly surprised that they had a cheeseburger-with-fries meal as an unlisted item. xD