Remembering a pioneer in computer systems 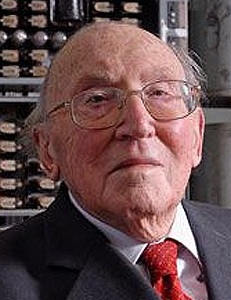 The computer, known as EDSAC (Electronic Delay Storage Automatic Calculator) was a huge contraption that took up a room in what was the University’s old Mathematical Library. It contained 3,000 vacuum valves arranged on 12 racks and used tubes filled with mercury for memory. Despite its impressive size, it could only carry out 650 operations per second.

Before the development of EDSAC, digital computers, such as the American Moore School’s ENIAC (Electronic Numeral Integrator and Computer), were only capable of dealing with one particular type of problem. To solve a different kind of problem, thousands of switches had to be reset and miles of cable re-routed. Reprogramming took days.

In 1946, a paper by the Hungarian-born scientist John von Neumann and others suggested that the future lay in developing computers with memory which could not only store data, but also sets of instructions, or programs. Users would then be able to change programs, written in binary number format, without rewiring the whole machine. The challenge was taken up by three groups of scientists — one at the University of Manchester, an American team led by JW Mauchly and JP Eckert, and the Cambridge team led by Wilkes.

Eckert and Mauchly had been working on developing a stored-program computer for two years before Wilkes became involved at Cambridge. While the University of Manchester machine, known as “Baby”, was the first to store data and program, it was Wilkes who became the first to build an operational machine based on von Neumann’s ideas (which form the basis for modern computers) to deliver a service.

Wilkes chose to adopt mercury delay lines suggested by Eckert to serve as an internal memory store. In such a delay line, an electrical signal is converted into a sound wave travelling through a long tube of mercury at a speed of 1,450 metres per second. The signal can be transmitted back and forth along the tube, several of which were combined to form the machine’s memory.

This memory meant the computer could store both data and program. The main program was loaded by paper tape, but once loaded this was executed from memory, making the machine the first of its kind.

After two years of development, on May 6 1949 Wilkes’s EDSAC “rather suddenly” burst into life, computing a table of square numbers. From early 1950 it offered a regular computing service to the members of Cambridge University, the first of its kind in the world, with Wilkes and his group developing programs and compiling a program library. The world’s first scientific paper to be published using computer calculations — a paper on genetics by RA Fisher – was completed with the help of EDSAC.

Wilkes was probably the first computer programmer to spot the coming significance of program testing: “In 1949 as soon as we started programming”, he recalled in his memoirs, “we found to our surprise that it wasn’t as easy to get programs right as we had thought. Debugging had to be discovered. I can remember the exact instant when I realised that a large part of my life from then on was going to be spent in finding mistakes in my own programs.”

Most modern computer users have never heard of Professor Wilkes, but he was one of the giants of computer science in its earliest days. Many of the elements of computing we take for granted are his invention. If you use a smart phone, or a personal computer, or an electronic book reader - anything that can run a computer program, or app, or whatever - well, he invented that whole concept. You might want to remember him with a grateful thought . . .