That Quantas superjumbo accident was a near-disaster indeed!


More facts are emerging about the Qantas superjumbo Airbus A380 that had to return to Singapore last week after one of its engines exploded in flight. It begins to look as though total disaster was only very narrowly averted. The Australian Courier Mail reports:

A QANTAS superjumbo was a flying wreck after an engine exploded shooting chunks of metal through fuel tanks and flight control systems. 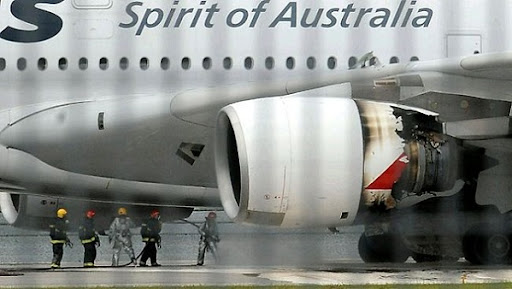 Last week's mid-air emergency off Singapore also badly damaged a wing, which may have to be replaced.

A full list of the damage to the Airbus A380 has been revealed after it was nursed back to Singapore on three engines.

When it touched down the fuel systems were failing, the forward spar supporting the left wing had been holed and one of the jet's two hydraulic systems was knocked out and totally drained of fluid.

Sources compared flight QF32 to the Memphis Belle, the World War II bomber that became the subject of a fictional award-winning 1990s Hollywood movie by the same name. The film portrayed the heavily damaged aircraft landing in England after a bombing raid on Germany.

Richard Woodward, vice-president of the International Air Pilots' Federation, told the Herald Sun yesterday that the lesson from the near disaster was the value of an experienced flight crew.

"There was a wealth of experience in the cockpit, even the lowest ranked officer on board had thousands of hours of experience in his former role as a military flying instructor," said Capt Woodward, himself an A380 pilot on leave from Qantas.

As another senior pilot said: "It is bad enough for an engine to explode in mid-air let alone lose so many secondary systems".

Investigators found shrapnel damage to the flaps, a huge hole in the upper surface of the left wing and a generator that was not working.

The crew could not shutdown the No. 1 engine using the fire switch.

As a result the engine's fire extinguishers could not be deployed.

With more than 80 tonnes of highly volatile jet kerosene still in the 11 tanks -- two of which were leaking - they made an overweight and high speed approach to Changi Airport.

Without full hydraulics the spoilers - the hinged flaps on the front of the wings - could not be fully deployed to slow the jet.

The crew also had to rely on gravity for the undercarriage to drop and lock into place.

On landing they had no anti-skid brakes and could rely on only one engine for reverse thrust - needing all of the 4km [13,123-foot] runway at Changi to bring the jet to a stop.

There's more at the link, including an 18-point list of the major damage suffered by the aircraft. It's pretty scary to read it. I imagine the 440 passengers that were on board are feeling mightily relieved right now!

All I can say is, I hope Qantas gives thumping great bonuses to the flight crew of that aircraft. They performed the near-impossible by landing it safely with so much damage and so many complications. I hope the next time I fly, I'm lucky enough to have a crew just as good in charge of the aircraft.

Yep, they WERE lucky, and yet more issues with Airbus design flaws will be coming out...

"Yep, they WERE lucky, and yet more issues with Airbus design flaws will be coming out..."


Er, I think it was the ENGINE that caused the damage. The Airbus kept flying despite the damage and thanks to the QANTAS Pilots.