Do they clang when it walks?

A SPECIES of cricket has the largest testes in relation to its body weight of any known creature in the world, stunned scientists have reported. 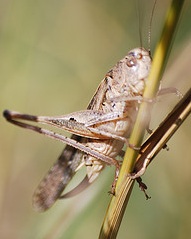 The tuberous bushcricket (Platycleis affinis) has testes that amount to 13.8 per cent of its body mass - the rough equivalent of a man hauling around tyre-sized testicles weighing 10 kilos.

"We couldn't believe the size of these organs. They seemed to fill the entire abdomen," said Karim Vahed, a behavioural ecologist at Britain's University of Derby.

The tuberous bushcricket beat all rivals in a testicular comparison of 21 species of bushcrickets, also known as katydids.

But for all its gonad grandstanding, the insect did not produce more sperm per ejaculation than others and this offers an intriguing challenge to evolutionary theory.

Testes tend to be larger in species where females are more promiscuous.

The assumption behind this is that the male which produces the most sperm has an advantage over his rivals in love.

But the tuberous bushcricket may cause this theory to be revisited, say the authors.

Its large reserves of sperm enable it to ejaculate, in tiny amounts, with a bigger number of females, thus boosting its chances of reproductive success.

What I want to know is, who decided that the testicle size of crickets would be a fruitful subject for research? And how much money were they able to wangle for their research? This sounds like an insider's rather elaborate practical joke, if you ask me!

"What I want to know is, who decided that the testicle size of crickets would be a fruitful subject for research?"

You'd be surprised. Speaking from the perspective of someone with a keen interest in the nuts and bolts of sexual selection theory, this is actually a really interesting result that suggests a couple of possibilities for followup research.