The Daily Mail reports that a man taken into custody by police in Florida caused a stir by his appearance.

It was not a matter of him resisting arrest or being uncooperative. Nor did it have anything to do with his identification - he provided his name and other personal details, and submitted to fingerprinting and a mugshot.

The trouble started when they got to the part in the paperwork that requires them to note 'unique physical features'.

The suspect had an unique physical feature alright... no forehead! 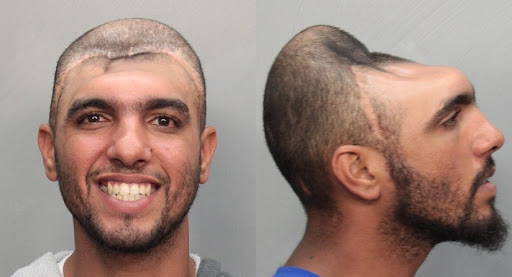 The mugshots, especially the one of the suspect in profile, shows why the arresting officers were left scratching their normal heads for a proper description.

After an unspecified period of time, the police clearly gave up, as the charge sheet merely states 'half a head' - hardly the medical term for it.

The release of the highly individual mugshot online caused a flurry of conjecture over whether the photos were faked.

But a spokeswoman from the Miami-Dade County Pre-Trial Detention Center said she saw the suspect while he was being processed.

She rather casually added: 'I just looked at him. I see a lot of stuff. It didn't really bother me.'

I've seen similar injuries before, although never with so great a depression left in the skull after recovery. They typically occur when part of the brain has to be removed after a serious injury to the head, frequently also involving removal of parts of the skull that can no longer be put back into place for the bone to heal normally. I've seen others where metal plates have been shaped to replace parts of the skull . . . but in this case, clearly that wasn't possible.

However, I'm not convinced that the photographs as shown above are of the same person, or aren't perhaps faked in other ways. Consider these points:

On the other hand, perhaps I'm just seeing things. What do you think, readers? Real, or fake? Please let us know your opinions in Comments - also if you have any more information about this case than that provided in the linked article.

The beards are different too.

Actually, that photo is a composite of two separate mugshots from two separate arrests. This link --> http://deadspin.com/5694479/half+headed-man-takes-worlds-most-bizarre-mugshot <-- has more detail and a link to the older mugshot, which has the longer beard and the blue clothing.

It may be a composite but there is still the points about the nose, ears and facial growth. I think the profile has been doctored.