I'm intrigued by the suggestion that a Chinese village may have been founded by former Roman legionaries, more than two millennia ago.

For years the residents of the remote north western Chinese village of Liqian have believed they were special.

Many of the villagers have Western characteristics including green eyes and blonde hair leading some experts to suggest that they may be the descendants of a lost Roman legion that settled in the area.

Now DNA testing of the villagers has shown that almost two thirds of them are of Caucasian origin.

The results lend weigh to the theory that the founding of Liqian may be linked to the legend of the missing army of Roman general Marcus Crassus.

In 53BC, after Crassus was defeated by the Parthians and beheaded near what is now Iran, stories persisted that 145 Romans were captured and wandered the region for years. 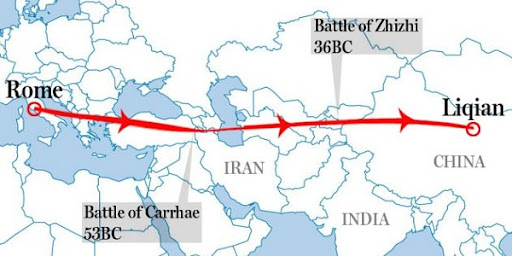 The town's link with Rome was first suggested by a professor of Chinese history at Oxford in the 1950s.

Oxford professor Homer Dubs believes the group travelled east, were captured by the Chinese and founded Liqian in 36BC.

Prof Dubs theorised that they made their way as a mercenary troop eastwards, which was how a troop 'with a fish-scale formation' came to be captured by the Chinese 17 years later.

It has been suggested that some made their way east to today's Uzbekistan and later enlisted with the Hun chieftain Jzh Jzh against the Chinese Han Dynasty.

He said the 'fish-scale formation' was a reference to the Roman 'tortoise', a phalanx protected by shields on all sides and from above.

Homer Dubs pulled together stories from the official histories, which said that Liqian was founded by soldiers captured in a war between the Chinese and the Huns in 36BC, and the legend of the missing army of Marcus Crassus, a Roman general.

The Han Chinese triumphed at the Battle of Zhizhi, where the losing side is recorded to have adopted a 'fish-scale formation' during the fight - perhaps used by mercenaries (possibly including captured Roman legionaries) sent from Parthia? If so, that's another link.

If only we could identify the area of Italy - or other part of the Roman Empire - where those particular legionaries originated, it might be possible to do some sort of widespread DNA sampling to see whether their descendants in that region show similarities to those of the villagers in China. Absent that, I guess this will remain nothing but speculation . . . but what a fascinating thought!

As Shakespeare would put it:

HORATIO
O day and night, but this is wondrous strange!

HAMLET
And therefore as a stranger give it welcome.
There are more things in heaven and earth, Horatio,
Than are dreamt of in your philosophy.

Tam, being fascinated by Roman legions and their doings, would be interested in this one.

Were captured AND wandered the region???